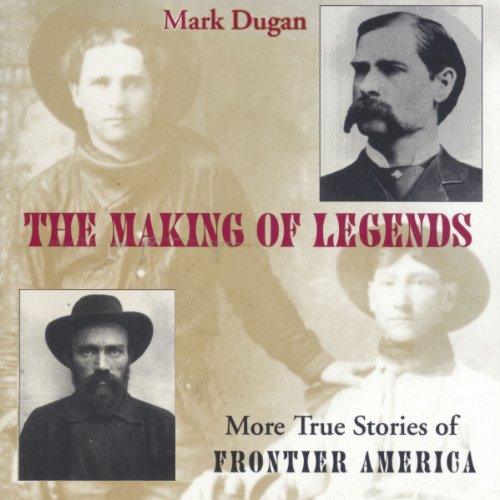 The Making of Legends

The Making of Legends

Some of the American West’s grandest legends are about people who in reality were remorseless killers, robbers, and bandits. These outlaws flourished during the 1800s and gained notoriety throughout the following century. How did their fame persist, and what has inspired the publishing, movie, and television industries to recreate their fictionalized careers over and over again?

Mark Dugan brings reality to the forefront in The Making of Legends. Some of the characters in his accounts are practically unknown but deserve more recognition than the bandits whose names are mythic. Exhaustive archival research enables him to recreate such colorful lives as North Carolina’s Malina Blaylock, who, disguised as a man, joined her outlaw husband in the Confederate army; slippery escape artist David Lewis, the Robin Hood of the Cumberland, who finally stopped two bullets in a chaotic Pennsylvania shoot-out; Wyatt Earp, in his mysterious post-OK Corral year, amidst the Coeur d’Alene gold rush; and grim “Laughing Sam” Hartman, of South Dakota.

Dugan sets the stage by explaining how newspapers and dime novels fanned the flames of public fascination with outlaws. He unmasks the real Billy the Kid, traces the paths of Butch Cassidy and the Sundance Kid to their historic shoot-out in South America, and masterfully summarizes the Civil War grudges, bloodshed, and wanton destruction along the Kansas-Missouri border that spawned Jesse and Frank James and the Younger brothers gang.

In researching the lawless era of the American frontier, Dugan discovered much information that has never been published - material that will expand readers' views of frontier history and people, both good and bad. The Making of Legends proves that the actual stories of notorious legends can be more exciting, moving, and intriguing than anything dreamed up in a dime novel or a Hollywood fantasy.

“Dugan utilizes newspapers, government documents, court records, and local histories, to construct interesting, well-illustrated stories…His book will fascinate individuals interested in Western outlaws, even those who are relatively obscure.” ( Journal of the West)

I would like to hear it by a different reader.

What was one of the most memorable moments of The Making of Legends?

I was impressed that the author outlined a great deal of the humanity behind these "outlaws", and didn't focus solely on those we know so much about already. He also gave great accounts of female outlaws, a group that is under-serviced.

The narrator did not pronounce most of the place names correctly, which might have required a little research on his part, but which would have made the reading a lot less cringe-worthy. Also, his reading style was choppy, and there were slight mistakes, which although forgivable, might have been fixed with a little editing.

Did The Making of Legends inspire you to do anything?

I am inspired to read more about these outlaws.

Overall, the book was a good "read", but I was quite disappointed by the narration of it, which might, if the book had not been as good, have forced me to ask for a refund.