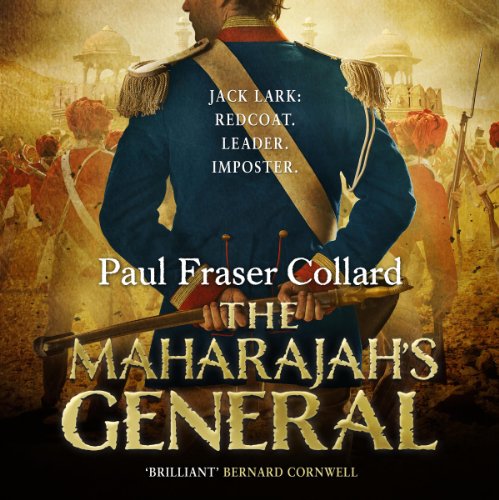 A riveting tale of battle and adventure in a brutal land, where loyalty and courage are constantly challenged and the enemy is never far away.

Jack Lark barely survived the Battle of the Alma. As the brutal fight raged, he discovered the true duty that came with the officer's commission he'd taken. In hospital, wounded, and with his stolen life left lying on the battlefield, he grasps a chance to prove himself a leader once more.

Poor Captain Danbury is dead, but Jack will travel to his new regiment in India, under his name. Jack soon finds more enemies, but this time they're on his own side.

Exposed as a fraud, he's rescued by the chaplain's beautiful daughter, who has her own reasons to escape. They seek desperate refuge with the Maharajah of Sawadh, the charismatic leader whom the British Army must subdue. He sees Jack as a curiosity, but recognises a fellow military mind. In return for his safety, Jack must train the very army the British may soon have to fight....

What listeners say about The Maharajah's General

This is a story of rather disgusting bad behavior in men.
From the East India Company commander who incites a war with a Maharajah to win personal laurels, to a British officer who arrogantly makes bad battle decisions, putting his men in grave danger, and then blames others for the result. Worse still the "hero" of the book is offered refuge by the Maharajah when he is found guilty of impersonating an officer and repays the Maharajah's kindness by betraying him to the British and then leading the fight against his seemingly justified cause.
Gory and inglorious.

almost a thriller I felt so tense. excellent story strong characters as our demi-hero embarks on another deception but this time is found out early, strange to say I like his honesty, and human emotions are well explained to situation like social-psychology

the second adventure of Jack's. story is Lacey and absorbing. I am not so convinced that the narration is quite what it should be somehow.

Wouldn’t bother. Not terrible but nothing to rave about. Epilogue of the last 6 minutes was my favourite.

With admirable attention to histrical detail whilst using his tried and tested impersonation back story the whole thing was thoroughly enjoyable. Looks like I'm hooked on the series

So bad I couldn't believe it A book written by a ten year old boy without an editor. Complete rubbish. Also a poor reader but, to be fair even Tim Piggot Smith couldn't make a silk purse out of this pigs ear.

I would, just about

If you’ve listened to books by Paul Fraser Collard before, how does this one compare?

Really enjoyed the first book but this isn't as good, or as original. Part Zulu, part Mills and Boon I think the author could have done better with the storyline. The fight scenes are very well-written but the constant enforcing the of view that all British officers were stupid and/or cowards became rather tedious in the end. I'll buy the next book to see where he takes us but hoping for an effort more like the first adventure.

Performance was good, not sure about all the accents but it's not easy