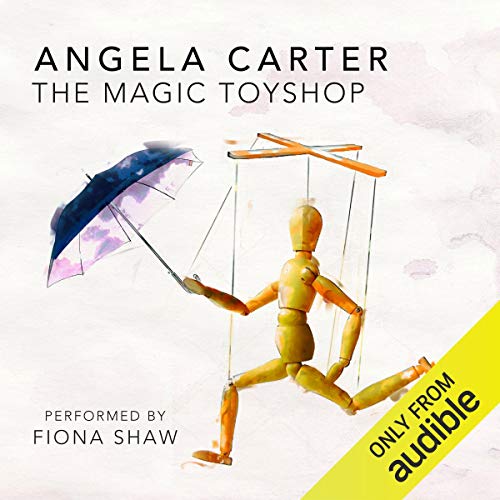 By: Angela Carter
Narrated by: Fiona Shaw
Try for $0.00

A coming of age tale which extends the nature and boundaries of love, as seen through the eyes of the youthful and naïve Melanie, The Magic Toyshop was enormously successful and cemented Angela Carter's status as one of England's greatest and most daring writers.

'This crazy world whirled around her, men and women dwarfed by toys and puppets, where even the birds are mechanical and the few human figures went masked... She was in the night once again, and the doll was herself.'

When tragedy strikes, young Melanie and her two siblings are forced to abandon their family home and sent to live in London with their aunt Margaret, a kindly and beautiful mute, and their abusive and highly manipulative uncle, Philip.

Standing on the cusp of womanhood and threatened by her perilous new surroundings, this classic gothic novel follows Melanie as she interacts with a host of colourful characters and becomes increasingly aware of her own morality and sexuality.

Angela Carter was born in 1940, in Sussex. She grew up in the shabbily respectable south London district of Balham, the second child of an eccentric journalist father and a neurotic housewife mother.

She studied English at Bristol University before travelling extensively, teaching and writing numerous best-selling novels. They have all received considerable critical acclaim and remain firm favourites of modern English literature.

Angela was a devout feminist throughout her life, wrote for Spare Rib magazine and voted Labour. Her novels are wholly reflective of her world views and continue to inspire new generations of men and women worldwide.

Fiona Shaw, CBE, is an Irish actress and opera director, best known for her role as Petunia Dursley in the Harry Potter films.

Having graduated from the Royal Academy of Dramatic Art, Fiona has worked extensively with the Royal Shakespeare Company, as well as the National Theatre. Her most memorable stage credits include The Taming of the Shrew, Hedda Gabler, Medea, As You Like It and Les Liaisons Dangereuses. She has twice been awarded the prestigious Laurence Olivier Award for Best Actress for her performances in Electra and Machinal.

What listeners say about The Magic Toyshop

I was looking forward to hearing Fiona Shaw’s presentation, but found the manner in which she ran sentences and even paragraphs together without a slight pause, made the story, the changes of scenes and the dialogue between characters hard to inderstand.

This is an excellent short story which I listened to in one sitting. It is quite dark, putting me in the mind of Brighton Rock. The narrator is excellent.
However, the audiobook is badly edited and the same lines keep being repeated. Audible, did no-one listen to this before it had been released? I have come to expect something more professional from audible.

Released in 1967, 'The Magic Toyshop' is a typical second novel. Remain the virtuosity of the language, the strong images and the captivating poetry of the prose, but characters are weakly, I dare say puppet-like developed. Plot is somehow inproportionally built and for God's sake let's drop the puppet-and-puppeteer topic once for all. It has been written in a rush and even if the novel has some briliant moments, 'Shadow Dance' seems a masterpiece in comparison.
Narrator deserves no stars. She doesn't respect sentence limits, paragraph endings let alone chapters, merging everything in a hasty, annoying performance. What's the hurry, Fiona? It was devastating, a mediocre novel and a worst narrator put together. I keep on reading Carter purchasing 'Several Perceptions', her third one. Let's hope for the best.

Fiona Shaw has a wonderful voice, and I'd pretty much listen to her reading out the phone book. Add her voice to Angela Carter's talk tale of Irish characters living in South London, add in the orphans and then some magic realism and you get a wonderful combination. If you love this book already then enjoy what Fiona Shaw brings to it; if you're new to it then just enjoy the story.

...with an excellent narration by Fiona Shaw. The story captures the thoughts and passions of a teenaged girl in the sixties. I loved it.

I didn't want it to end

Finished this story a couple of hours ago and already miss it. I want to go back into the world the author created so vividly.

Angela Carter’s sublime writing makes you feel you are there witnessing the story unfold, a truly brilliant writer. Unique , imaginative , one of a kind.
Fiona Shaw’s reading added another layer of Joy, wonder, mischief and character. Loved her voice for Finn , it added so much richness to the character.
This book is for fans of Angela Carter or Fiona Shaw, lucky for me I am a huge admirer of both!
I LOVED this reading and was disappointed when it was over.

not my favourite book I was not able to enjoy th