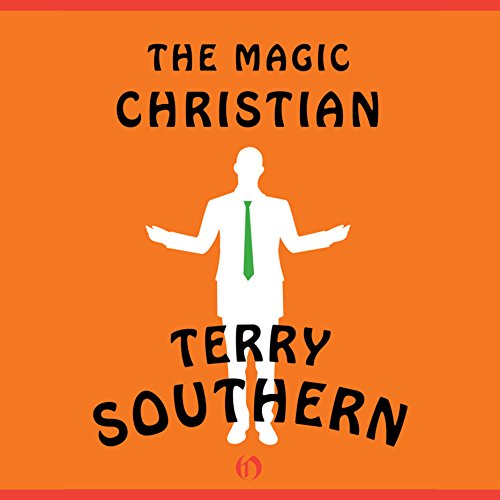 By: Terry Southern
Narrated by: Edoardo Ballerini
Try for $0.00

In this uproarious and wicked cult-classic, Southern skewers American greed and pomposity

Guy Grand, an eccentric billionaire prankster, is rich enough to do whatever he likes. And what he likes is to carefully execute projects where he can cauterize by ridicule what the rest of the world ignores: Complacency, greed, corruption, and idiocy. Determined to "make it hot for people," Grand spends his billions staging a series of hilarious, sometimes bewildering stunts, lampooning along the way the American holy cows of money, status, power, beauty, media, and stardom.

Concocting deliciously perverse mayhem, he throws a million one-hundred-dollar bills into an enormous vat of steaming offal, proving just what people will do for money, and he promotes a new silky shampoo that turns hair to wire and a deodorant that becomes a time-released stench-bomb. He inserts subliminally suggestive and perverse images into well-loved classic films, takes a howitzer on safari, and brings a panther to a kennel club dog show. His most elaborate adventure is an ultra-exclusive cruise aboard the S.S. Magic Christian, where elite passengers are treated to a series of madcap indignities.

The Magic Christian is a hilarious and savagely satiric view of American commercialism, rich in Southern's deft handling of detail, dialogue, and delightful deviancy.

What listeners say about The Magic Christian

Brilliant satire, brilliantly read. A masterpiece from Terry Southern, screenwriter of Dr. Strangelove. One of the great books of the twentieth century

not to be mistaken for christian reading

I made it through several chapters trying to get a hold on the story and the main plot. I never recognized anything to start coming together all the way up to chapter 10. although I typed in that I was searching for christian literature and found the title drawing to me. the words that were used in this book were so far from what I expected, that I listed it as finished but will not pick this one back up and will look further into what I pick next time so that I do not get ambushed again. If it is considered to be christian work, then please make sure your words used could be read to children. good luck on the next one.

The book just really didn't go anywhere. It was a series of pointless pranks played on unsuspecting people by a bored billionaire. I think it was meant as a comedy but I just didn't find it very funny, perhaps it's just dated and at the time of it's release it was very funny. I'm not sure but I didn't enjoy it.

Easily the my worst audible experience

The "plot" of this book, if it indeed has one, is as a biography of a fictional rich investor who gets sadistic kicks out of demeaning people with his money. It started with him giving a hot-dog vendor such a large bill that he could not change it as the train he is on pulls away and the vendor cannot manage to return it no matter how frantically he tries; this is the only gag he does with any heart at all (and is almost funny), the rest is full of "japes" like having strangers jump in pits of excrement to retrieve money and buying manufacturers and forcing them to make harmful products with a finale of trapping people on a boat called "the Magic Christian" and causing them as much pain and suffering as he can.

If you have any compassion for fellow humans I think you will find this as funny as I did: not at all. I found no redeeming qualities in this book; I tried to return it but was not allowed to by the system, perhaps because I bought it with a discount. It would not been worth my suffering through if it were free.

Theatrically told to great effect. Read decades ago and thrilling to revisit this way. Highly recommended.