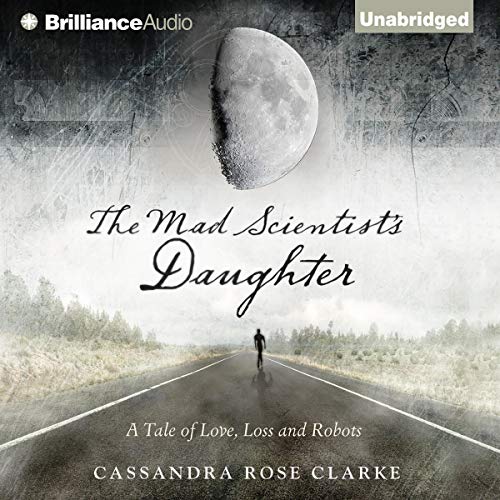 By: Cassandra Rose Clarke
Narrated by: Kate Rudd
Try for $0.00

Finn looks and acts human, though he has no desire to be. He was programmed to assist his owners, and performs his duties to perfection. A billion-dollar construct, his primary task now is to tutor Cat. As she grows into a beautiful young woman, Finn is her guardian, her constant companion…and more. But when the government grants rights to the ever-increasing robot population, however, Finn struggles to find his place in the world, and in Cat’s heart.

"Unique, heart-wrenching, full of mysteries and twists." (Tamora Pierce on The Assassin’s Curse)

What listeners say about The Mad Scientist's Daughter

Interesting tale from an adolescent point of view of growing up with a robot as a companion. It could have been financed by the cigarette lobby with its silly adolescent preoccupation with cigarettes.
This may be the future with it's many legal complications. Interesting glimpse of the brave new world

I don't really know how i feel about this book. First of all the premise suggests that the book will be in Finn's POV or trade POV with the heroine, but it is strictly Cat's POV. I feel like the book would have had more substance if it was both their POV. The story starts out promising and then just peters out and seems like the author all but gave up at the end.

I really enjoyed this story. A glimpse of what the future may look like and the dilemmas we may face as a society. The overuse of the adjective "gauzy" was a bit annoying, lol, but otherwise I rather enjoyed it.

It just didn't do it for me.

What would have made The Mad Scientist's Daughter better?

I did not enjoy the story as a love story or a sci-fi novel at all. I thought the main character was annoying and the android she was in love with had no personality, so it's hard for me to imagine how she even fell in love with him.

What does Kate Rudd bring to the story that you wouldn’t experience if you just read the book?

I've enjoyed narrator Kate Rudd from other books and while I did not enjoy the story at all I did enjoy the presentation of it, she always does a good job.

What character would you cut from The Mad Scientist's Daughter?

Was sucked in despite weaknesses

There's a lot to like about this book. Finn's character is amazing and intriguing. Cat - not so much. The book is way too long. It would have been great to cut to the chase wtihout everything in the middle. And I can't quite forgive Cat for what she does to Richard but can't say much more without giving away spoilers.

An Exquisite Tale of Transforming Love

There is an epic sweep to this book not only because it takes place over much of a lifetime, but it deals with core issues:
◾How do we find our identity and calling in a world where convention and societal pressure would have us choose a safe and deadening path?
◾How do we risk ourselves to truly abandon our self-focus to love another, not just love our image of another but love the person, in the midst of a world filled with pain and loss
◾Can we let go of our self-focus, our enlightened self-interest and ought we?

Cassandra Rose Clarke brilliantly explores these issues and more in The Mad Scientist's Daughter. Science fiction has always been a great medium to explore issues since we're pulled out of our culture, and its related blinders, into another world with less pre-built conceptions. Ms. Clarke takes a future earth, which is so much like our own, with all our current foibles, some additional challenges and capabilities. The story centers around Caterina Novak and Finn. Cat is the daughter in the title and Finn, an android unique in his understanding and consciousness.

I listened to much of the story on the Audible version (flipping between the Kindle and the Audible version with Whispersync for Voice). Kate Rudd narrates the story. I first heard Ms. Rudd perform John Green's The Fault in Our Stars. She is fast becoming one of my favorite narrators and performs this book admirably. One of the brilliant choice points was to play Finn with a totally flat, neutral voice. This may seem obvious for an android but I've heard them done with very artificial robotic voices. This is done with flat, even timing and tone but it never feels artificial. Certainly her performance drew me in and allowed me to get lost in the novel.

Third time listening and will go back again!

I just love this story and wish there was more to hear about Kat and Finn.

Where does The Mad Scientist's Daughter rank among all the audiobooks you’ve listened to so far?

Cat the protagonist. Feels as if Ive grown up with her.

Have you listened to any of Kate Rudd’s other performances before? How does this one compare?

Yes, The Fault in Our Stars. This wasn't as good as a performance in my opinion but then again, TFIOS is my favorite book so I am biased on that question. I love her voice and I do like how she does male characters without that weird forced scratchy "male" voice.

I did laugh at parts but no I didnt cry. That isnt to say that it didnt strike any emotion because it certainly did.

I read this book as part of background reading for my own book about ai and wished I hadn’t. Not because it’s bad but because it is so good - totalling engrossing and with a feeling of doom sustained throughout. If mine is even half as good I will be satisfied. Loved the narrators style which fits with the genre. Great job.

Fledgling sentient AI meets little girl, & she learns to love & respect him as she grows and stretches her wings into adulthood, he meanwhile bites his robotic tongue, and is the perfect gentleman when she gets married to a human.. Some technical errors, but beautifully written exploring a subject which may one day become reality....

Where does The Mad Scientist's Daughter rank among all the audiobooks you’ve listened to so far?

Pretty good but could have been a little better with a different narrator.

What was one of the most memorable moments of The Mad Scientist's Daughter?

Nothing specially stands out. But I enjoyed the interaction of Kat and Finn.

Did Kate Rudd do a good job differentiating each of the characters? How?

Well . . . I do think the voice of Kat's father was poor. Kate Rudd tried to deepen her voice to give the impression of an older man, but with her rather slow, deliberate narrating style it came over rather like someone reading The Three Bears to a child and trying to do Daddy Bear. Sometimes the narration was a bit too slow and ponderous for comfort. At first it was a bit off-putting but it didn't really spoil it for me once I got used to the way she read it as I enjoyed the story itself a lot.

The same as the book - "A tale of love, loss and robots."

Starts off feeling rather like a children's book or one aimed at young adults but this is largely due to the narrating style. But it develops as the character Kat gets older within the story so I suppose it works that way. I did look forward to hearing more of it each day so i'd recommend it if you like stories like Edward Scissorhands maybe.