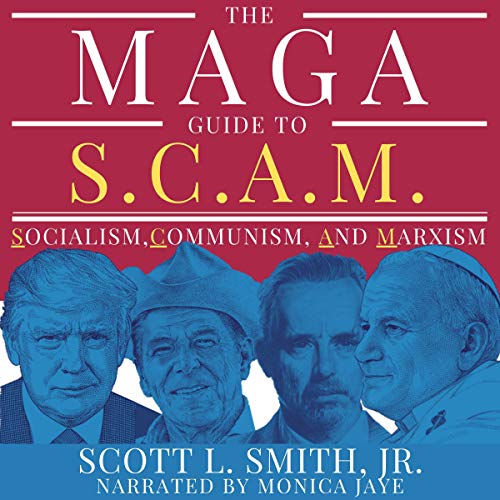 Don’t be scammed! The movement that brought Donald Trump to the White House is under attack by scam artists. Mainstream media, liberal elites and professors, and Antifa-led rioters are promoting a scam, notorious for its long history of failure and disasters. The S.C.A.M. is Socialism, Communism, and Marxism.

Almost every American generation has had to fight this scam. Thankfully, we can learn from the wisdom of the heroes who have stared down the ugly face of scam and defeated it.

Mobs are tearing down the statues of American heroes. Rioters are ransacking the history of our country. President Trump sometimes seems like a man standing alone before a wave of irrationality and outright lies. Don’t let Trump stand alone!

Fed up with liberal colleges turning our kids into Marxists? The hypocrisy and contradictions of mainstream media? Twitter mobs and the “Cancel” culture? Swamp monsters? Ordinary Americans miss the days when their countrymen cared about earning an honest wage for an honest day’s work.

Remember when Democrats still seemed normal? When you could still talk to your liberal friends? There’s still time to protect your loved ones from scam.

Attorney and theologian Scott L. Smith, Jr. brings together the 20th century’s greatest defenders of truth to explain once and for all how to defeat scam. President Trump and Reagan, Winston Churchill, Jordan Peterson, and Pope John Paul II defend all the essentials of civilization that the scammers have dismissed: Families, marriage, churches, religious freedom, private property, and the rights of the individual. This guide gives you the words to defeat scam for the future of America.

As mainstream media keeps churning out lies about the successes of Socialism, Communism, and Marxism - the SCAM - and hiding their failures, Scott L. Smith’s The MAGA Guide to S.C.A.M. is a powerful reminder of the true narrative of freedom and greatness that swept Donald Trump to the presidency, helped President Reagan and John Paul II defeat Soviet Communism, Winston Churchill defeat Nazi Socialism, and Jordan Peterson curtail the spread of Marxism and post-modernism on college campuses.

What listeners say about The MAGA Guide to S.C.A.M.

Well-sourced, credible, concise, and easy-to-read - loved it! The author masterfully uses history and brilliant quotes from across history and the present to combat the SCAM of Socialism, Communism, and Marxism. We need to understand the problem at the root of this SCAM. Great wake-up call!