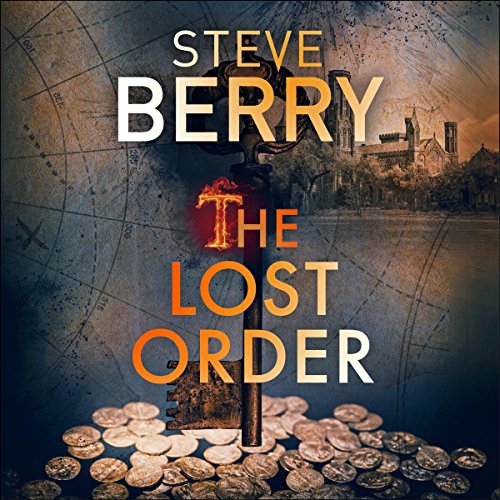 By: Steve Berry
Narrated by: Scott Brick
Try for $0.00

The Knights of the Golden Circle was the largest and most dangerous clandestine organization in American history. It amassed billions in stolen gold and silver, all buried in hidden caches across the United States. Since 1865 treasure hunters have searched, but little of that immense wealth has ever been found.

Now, 160 years later, two factions of what remains of the Knights of the Golden Circle want that lost treasure - one to spend it for their own ends, the other to preserve it. Thrust into this battle is former Justice Department agent Cotton Malone, whose connection to the knights is far deeper than he ever imagined. At the center is the Smithsonian Institution - linked to the knights, its treasure, and Malone himself through an ancestor, a Confederate spy named Angus "Cotton" Adams, whose story holds the key to everything. Complicating matters are the political ambitions of a reckless speaker of the House and the bitter widow of a United States senator, who together are planning radical changes to the country. And while Malone and Cassiopeia Vitt face the past, ex-president Danny Daniels and Stephanie Nelle confront a new and unexpected challenge, a threat that may cost one of them their life.

From the backrooms of the Smithsonian to the deepest woods in rural Arkansas and finally up into the rugged mountains of Northern New Mexico, The Lost Order is a perilous adventure into the dark past of the United States and a potentially even darker future.

What listeners say about The Lost Order

Story is great. its very irritating with the author interrupting the natural flow. Scott Brick is a wonderful narrator.

Great story but annoying author comments throughout the book.

I can't tell you how annoying it is to have the author pop up at the end of every chapter with 'facts'. Totally destroys the continuity of the story. Stop doing this & I'll be able to keep on enjoying these books.

Right now I find it so off-putting.

Another very enjoyable Cotton Malone adventure. This time he's on the hunt for lost Confederate gold, but unsurprisingly so are a few others...
Great to see Danny Daniels get more of a starring role in this story - he really is a great character.
The Lost Order can be enjoyed as a standalone novel, however you would benefit from having knowledge of the various character relationships which have grown in the earlier books of the Malone series.
Another flawless performance from Scott Brick. I'm already looking forward to the next Malone instalment!

This is highly recommended - a thoroughly great enjoyable dash across the US, with plenty of action and intrigue.

A ripping yarn from the pen of Berry, gloriously read by the voice of Brick!

Spoilers... Better than last book, great performances as always. The whole connection to Cottons ancestor was rather ridiculous, and how he got his name, seems he couldn't decide which reason it was so went with two, which didn't work for me. Pick one and stick with it, they didn't go together well.

I'm sure I've read Steve Berry in the past and enjoyed him but this book was very slow and failed to grab my interest. subsequently I gave up after about an hour. Also I liked the idea of the author's comments at the end of each chapter to understand more about themes of the book but for me it made the book disjointed and spoilt the flow. I might try another by this author but without the author's comments!

I liked the narrator best and the author's interruptions the least.

Have you listened to any of Scott Brick’s other performances? How does this one compare?

I would wait for it to come on TV

The author's continual interruptions were extremely annoying and broke what spell the story had woven. I will probably not buy any more of this series of audiobooks because of it.

What made the experience of listening to The Lost Order the most enjoyable?

Scott Brick as always is excellent, I bought this mostly due to his voice. However his performance is constantly interrupted by the author explain8ng himself. Gave up not even 4 chapters in. The story was quite good and I think I might have enjoyed it had I had the opportunity to listen properly. Footnotes in a text are fine, you can ignore them or come back later, in audio 😔 just irritating.

Weak story and hate the narroting by the author

Not really, irritating that after each chapter the author comes in with comments, sorry Mr Berry but hate it!! annoying and distrating and take away from the enjoyment of the book so much so I am going to return it. Had I known I would not have picked this book, we were unfortunately not allowed to download the previous book as apperently we would have known. I love the Cotton Malone books we have all of them, but will not be taken them without hesitation any more.

I two starred the narrating this is not due to Scott Brick (Hegets 5 from me) but the authors stuff inbetween.

The story is not great either, but I am thinking if this is because of the narrating in between or it is not good.

Make up your own mind on this but for me nah not a listen I recommend.

Maxwell and King by David Baldacci

Would you be willing to try another one of Scott Brick’s performances?

Yes love Scott Brick he would get 5 stars from me

Could you see The Lost Order being made into a movie or a TV series? Who would the stars be?

Authors comments annoying and disturbing the flow of the story

There is a german expression fir the idea conceived that the author should pass comments inbetween sections of the story - the term is “Schnappsidee”. The meaning if this can be looked up. It’s annoying, and to those of us trying to listen and live the “story” very disturbing to the flow. If this is the “new trend” and the author wants us to continue to buy his books, he should at least present the option to be able to switch the comments on/off depending on the listeners preference. And to all those history buffs out there, who think that the constant interruptions by the author presenting “historical facts to his research” is a wonderful idea, all I can say is: please go buy a history book. This is not the place. As it is, a good story is being annoyingly interrupted, at odd intervals.

Would you try another book written by Steve Berry or narrated by Scott Brick?

What other book might you compare The Lost Order to, and why?

Who might you have cast as narrator instead of Scott Brick?

If you could play editor, what scene or scenes would you have cut from The Lost Order?

All of the authors interruptions

Steve Berry is a tremendous author and I've listened to all his books but this time it was RUINED by his constant interruption of the excellent narration to
give 'background' or 'explanations'. He seemed to want to impress with the extent if his knowledge. I for one like to lose myself in a book and become completely absorbed in the story. I found the authors interruptions at every chapter jarring. Audible needs to offer a version WITHOUT his contributions. I liked the explanations he always added at the end of his books stick to that Steve and let Scott's narration transport us into the world of Malone.

I didnt like authors interruptions. I did find the book interesting but it was a bit like a documentary

Did not disappoint and an engrossing tale. The split of voices made the writer's notes easily identifiable from the story and therefore not confusing for listeners.

WOW! This is surely Berry's best.

What a great read. I was lost to the world while listening to this novel.

Story begins well but the constant explanations from the author breaks my interest. Didn't finish.