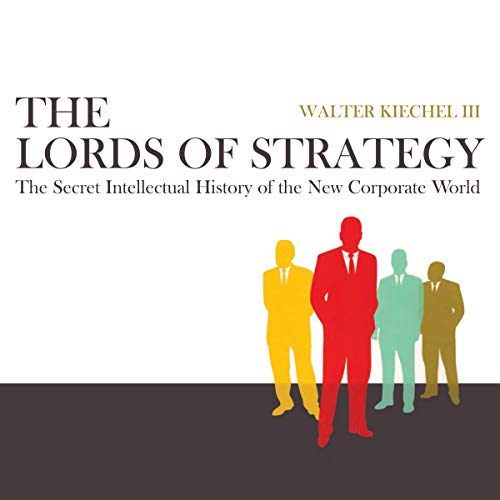 The Lords of Strategy

By: Walter Kiechel III
Narrated by: Robertson Dean
Try for $0.00

Imagine running a business without a strategy. It would be akin to driving blindfolded, to building a house without a blueprint. Yet just 50 years ago, business “plans” were mere extrapolations of the status quo, heedless of the forces that determine the fate of today’s organizations: competitive threats, customer needs, and business costs. The concept of strategy changed all that, paving the way for the creation of the modern corporate world.

The Lords of Strategy recounts the birth and evolution of strategy — arguably the most influential business paradigm of the past half century — and the trials and triumphs of the surprising disruptors who invented it. Principal among them were four men: Bruce Henderson, found of the Boston Consulting Group; Bill Bain, creator of Bain & Company; Fred Gluck, longtime managing director of McKinsey & Company; and Harvard Business School professor Michael Porter. Each was obsessed with pinpointing how companies achieve competitive advantage over others. This insider account reveals these industry’s pioneers as “idea junkies” - a new breed of intellectuals who wielded concepts as weapons for fighting business battles. Their relentless efforts to plumb the depths of competition exploded much of the prevailing wisdom, galvanized executives into action, and forced companies to understand themselves as never before.

An important book by one of management’s keenest observers, The Lords of Strategy provides listeners with a deeper understanding of the world they compete in and a sharper eye for what works — and what doesn’t — when forging strategy.

“[Kiechel’s] ‘The Lords of Strategy’ is a clear, deft and cogent portrait of what the author calls the most powerful business idea of the past half-century." ( The Wall Street Journal)
"Kiechel has done a real service…in bringing his subject to life. The book serves as a primer as well as a history, and as such almost any executive or B-school student would do well to pick it up.” ( The Conference Board Review)

What listeners say about The Lords of Strategy

Essentially, this book examines the arguments about the value of business strategy though the lense of management history. The author follows the progression of strategic thinking to the present. The work of consultants and academics building theory is all here. I have been familiar with the strategic models and literature for a number of yours, but this volume puts a real face on the entire process. Troubling is the influence of a handful of academics and consultants on contemporary business thinking. I just had not thought of the evolution of strategic thought in this context.

This is a great book, well written and expertly read by Robertson Dean. Anyone who works in business will benefit by listening to this one with one caveat. If you are familiar with the basic strategic planning models (Five Forces, BCG Matrix, etc) you will do fine. If not, you will benefit, perhaps,l more by reading the paper copy.

A History of Business Strategy Consulting

The book is a rather linear history of business strategy. It starts with roughly a chapter for each of the great contributors to the field (i.e., each of the ???lords of strategy???). But as the time-line progresses the story becomes more fractured with fewer ???Lords??? and many lesser contestants in the market place of ideas. Presumably this is corresponds to the real world, but the result is that the book undergoes a gradual change in style, ending with a very different style than it starts.

The book argues that the big Boston consulting firms were at the heart of this story. This simultaneously seems truer than I had realized and somewhat biased (e.g., where does Stanford and Silicon Valley fit in to this story).

Some of the history was not well known to me and I suspect is not widely known.

This is an intelligent, very well-researched analysis of the evolution of strategy as it has been practiced by the major consulting firms in the US, such as BCG, Bain and Co, and McKinsey. The book has a biographical style, but the reader learns as much about strategy as the people who practiced.

A wealth of knowledge ans insight

Interesting commentary on an industry and discipline I don’t know much about. No doubt, consulting has a major impact on the global economy in this book give me a window into that world

the characters and stories of strategy consulting throughout the 20th century are fascinating. I would recommend this book to practically everyone who deals with businesses over $25mm in revenue. It's educational and entertaining.

The earlier chapters were extremely informative, especially if you aspire to work for any of the strategy consulting firms they covered. The last 10 chapters were eye opening. You get a behind the scenes look at a lot of the intricacies that lead up to the housing market crash. This book is a great read!

recommended for any lover of business strategy

I found this informative read that help me put together and understand the history of a lot of the business for literature that I've read. highly recommended for enthusiasts

Everything I hoped for and much more. An amazing overview of the consulting world. Wonderful insight.

Indeed. A must read for anyone who want to know know about Strategy. This book is about history and there is no better way that history to understand the foundation of anything. Really appreciate Walter's effort in putting so much effort in compiling this book.

Which character – as performed by Robertson Dean – was your favorite?

The entire book was so absorbing that it was hard to say which one was the best moment. The book has so much of insight that I will recommend reading/listening to the end.