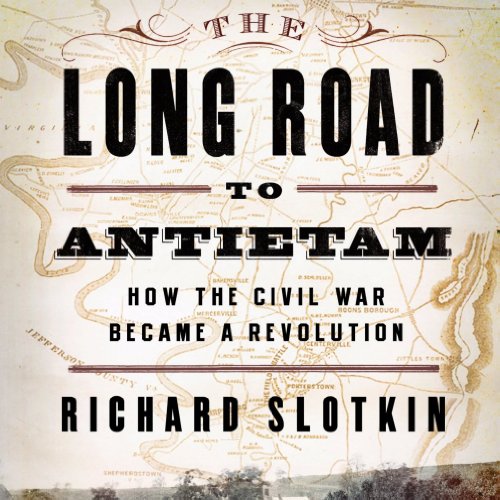 The Long Road to Antietam

How the Civil War Became a Revolution
By: Richard Slotkin
Narrated by: Alpha Trivette
Categories: History, American
3.5 out of 5 stars

A masterful account of the Civil War's turning point in the tradition of James McPherson's Crossroads of Freedom.

In the summer of 1862, after a year of protracted fighting, Abraham Lincoln decided on a radical change of strategy - one that abandoned hope for a compromise peace and committed the nation to all-out war. The centerpiece of that new strategy was the Emancipation Proclamation: an unprecedented use of federal power that would revolutionize Southern society.

In The Long Road to Antietam, Richard Slotkin, a renowned cultural historian, reexamines the challenges that Lincoln encountered during that anguished summer 150 years ago. In an original and incisive study of character, Slotkin re-creates the showdown between Lincoln and General George McClellan, the "Young Napoleon" whose opposition to Lincoln included obsessive fantasies of dictatorship and a military coup. He brings to three-dimensional life their ruinous conflict, demonstrating how their political struggle provided Confederate General Robert E. Lee with his best opportunity to win the war, in the grand offensive that ended in September of 1862 at the bloody Battle of Antietam.

A very thorough and detailed account of the history and political machinations of the early Civil War, leading to the Emancipation Proclamation. The intrigues of the almost dysfunctional general officer corps on the Union side is completely fascinating.

The narrator handles the material quite well, it is a non-fiction work and I do not appreciate dramatized readings. I would definitely listen to any other audiobooks he has narrated.

There is a lengthy description of the entire Antietam battle(s) which may not appeal to the more casual Civil War buff--including me. I listened to all of it, but it can easily be skipped by those of us who prefer a more overall view

A powerful, multi-dimensional description of a central pivot point in the war, this book shows Gen. McClellan in particular in all his complexity as a way to examine the incredible contradictions inherent in a democratic society that also enslaved millions. McClellan was basically a pro-white-supremacy northerner who wanted the union back together quickly so he could get elected president, and he seems to have considered turning his army toward Washington to do so!
This audio performance, however, is very difficult to get through. Turn it to half-speed and try to ignore how he hits the word "AND" the exact same way every time (if you can) and maybe you can make it through. It feels like the reader has little comprehension as if he were reading nonsense words.

Would you try another book from Richard Slotkin and/or Alpha Trivette?

Author manages to smother the remarkable story of the rivalry between Lincoln and McClellan under obsessive and colorless re-telling of every single battlefield move in two years of war.

I am asking for refund.