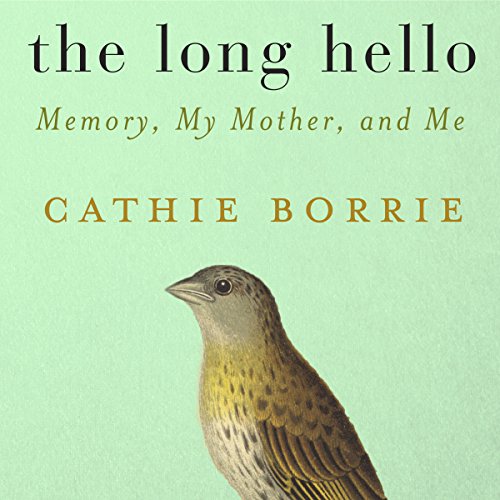 A powerful, ground-shifting account of caring for a parent with Alzheimer's, about which Maya Angelou exclaimed, "Joy!"

Since Cathie Borrie delivered her keynote performance at the World Alzheimer's Day event sponsored by the Community and Access Programs of the Museum of Modern Art, her self-published manuscript has won rapturous praise from noted writers and Alzheimer's experts alike, from Maya Angelou, Lisa Genova, and Molly Peacock to Dr. Bill Thomas; Jed A. Levine of the Alzheimer's Association, NYC; and Meryl Comer of the Geoffrey Beene Foundation Alzheimer's Initiative. Now it is available to the general public for the first time in a trade edition.

The Long Hello distills the seven years the author spent caring for her mother into a pause-resisting memoir that offers insight into the "altering world of the dementia mind". During that time Borrie recorded brief conversations she had with her mother that revealed the transformations within - and sometimes yielded an almost Zen-like poetry. She includes selections from them in chapters about her experience that are as evocative as diary entries. Her mother was the emotional pillar and sometime breadwinner in a home touched by a birth father's alcoholism, a brother's early death, divorce, and a stepfather's remoteness. In Borrie's spare prose, her mother's story becomes a family's story as well a deeply loving portrait that embraces life.

What made the experience of listening to The Long Hello the most enjoyable?

I think for me, what comes through in this story as an audiobook, is the intensity of the love between mother and daughter. I haven't read the book, I have only listened to this recording. It is achingly beautiful. I love her mum. The daughter's dedication. Her 'we're in this together' till the end, is heartbreaking and beautiful.

What does Jill Tucker and Cathie Borrie bring to the story that you wouldn’t experience if you just read the book?

They bring it to life. And that's what we want in a good story.

There were many. Words of her mother. The timing. Her description of those months up in the Far North. The white expanse.The way the book was constructed - moving as it did, smoothly from past, to present. Beautiful.