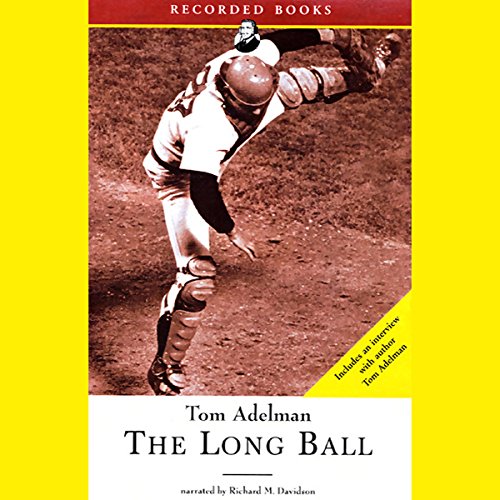 By: Tom Adelman
Narrated by: Richard M. Davidson
Try for $0.00

Critically acclaimed writer Tom Adelman is hailed as a renegade by the Village Voice Literary Supplement for his aggressive, no-holds-barred style. The Long Ball is his dynamic re-telling of baseball's thrilling 1975 season.

The year began with the dawning of free agency and ended with the greatest World Series of all time, featuring a legendary home run by Boston catcher Carlton Fisk. It was a season of such larger-than-life ballplayers as Reggie Jackson, Pete Rose, Catfish Hunter, Carl Yastrzemski, and Johnny Bench. From the preseason through the World Series, Adelman shares the fascinating back stories and recounts the classic games in such striking details that you'll swear you hear bats cracking.

A behind-the-scenes account that is blunt, funny, and sometimes shocking, The Long Ball is an engrossing story whether you love baseball or not. Richard M. Davidson narrates with all the panache of a play-by-play radio announcer.

What listeners say about The Long Ball

Waste Of A Wonderful Year

The author seemingly did the impossible--he wrote a poor book about the incredible 1975 World Series. His book is full of hyperbole, inaccuracies, and his personal opinion on such items as Johnny Bench's new wife Vicki's tight fitting blouse. He brings in for his own purposes Ricky Henderson who in 1975 was in high school, Dave McNally, who was washed up before he left the Expos and had no impact on the 1975 season, and the length of Sparky Anderson's son's hair. Shame on Adelman.

"Long Ball" is a terrific in-depth account of the exciting 1975 season that culminates with Carlton Fisk's iconic home run in the World Series.

Not bad at all

I am a Cincinnati Reds fan, so I guess I like the outcome of this story the best. I thought that the book was well written and presented. This time period had to be the "sexiest" time for MLB.

Excellent book about the world series that produced one of the most famous moments in baseball history. Highly detailed and stuffed with anecdotes. Highest recommendation