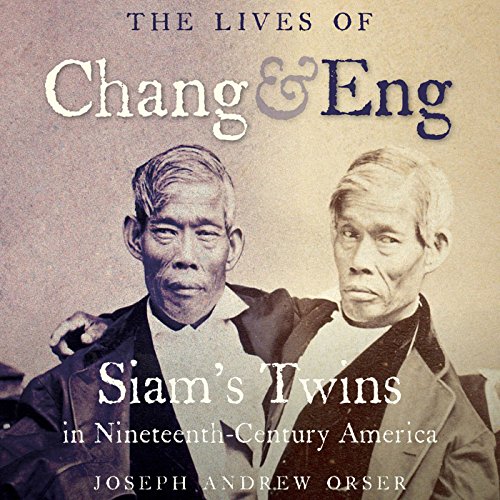 The Lives of Chang and Eng

The Lives of Chang and Eng

Connected at the chest by a band of flesh, Chang and Eng Bunker toured the United States and the world from the 1820s to the 1870s, placing themselves and their extraordinary bodies on exhibit as "freaks of nature" and "Oriental curiosities". More famously known as the Siamese twins, they eventually settled in rural North Carolina, married two white sisters, became slave owners, and fathered 21 children between them. Though the brothers constantly professed their normality, they occupied a strange space in 19th-century America. They spoke English, attended church, became American citizens, and backed the Confederacy during the Civil War. Yet in life and death, the brothers were seen by most Americans as "monstrosities", an affront they were unable to escape.

Joseph Andrew Orser chronicles the twins' history, their sometimes raucous journey through antebellum America, their domestic lives in North Carolina, and what their fame revealed about the changing racial and cultural landscape of the United States. More than a biography of the twins, the result is a study of 19th-century American culture and society through the prism of Chang and Eng that reveals how Americans projected onto the twins their own hopes and fears.

This was not at all interesting. Subject matter should have been interesting but it wasn't!

Gave it a good try but didn't like it

Tried listening to this book and gave it a good try but just found 1) the narrator was just not someone I was comfortable listening to and 2) found that yes the author did a lot of research but sensed that most of the content strayed too far off into unnecessary tangents. Overall too much stuffing not enough meat on the bones as a historical biography for my liking.

I’m sorry I didn’t research this book before I bought it but I took it on a friend’s advice that it was a good read. It might be for someone but it just wasn’t for me. I wanted more of a story and less of a documentary.

Would you try another book from Joseph Andrew Orser and/or Stephen Hoye?

The writer is all over the place with this book. It is more a disorganized stream of consciousness than a biography.

The prologue is intended as a quick overview of the book, but less than 2 minutes in the writer is going on and on and on about how they were seen as monsters and aberrations.

Chapter 1 is the youth and discovery of the twins, but is more a recap of the prologue than any real new information.

Chapter 2 is about them striking out on their own but gets more into the people who managed them and is completely out of order. In 1836 X happens and then in 1829 Y happened and then in 1837 this happened, and in 1869 this happened and in 1833 this happened. Absolutely no chronological order, and the topics discussed are not even do so via a different focus to allow the jumping around to make sense. Instead it is as if the author was just writing down facts as he could remember them. How any editor would allow this to pass amazed me.

There are entire chapters where the author says less than 5 sentences about the lives of the actual twins and instead quotes friends, business acquaintances, new papers, other books, and discusses other things going on in the US. It is honestly like he forgot he was writing a biography or rather had maybe 2 paragraphs of content and decided to fill the rest of the book with random stuff.

It would be more aptly titled "A Stream of Consciousness on Discrimination due to race and disability in the 1800s" than actually name anyone.

What could Joseph Andrew Orser have done to make this a more enjoyable book for you?

Have some sort of outline and stick to it. Have and provide more information about the Twins lives, get an editor. Stop making the same claim over and over (that they were seen as monsters). Provide historical, factual, live histories and not a random loosely slung together stream of thought

His pace and tone. The inflection he used to read the book was unnatural and completely distracting. He uses the same rise and fall of his voice in every sentence and its not a normal flow. It sounded more like a machine reading than a human, or if it was a human one that never read out loud before.

What character would you cut from The Lives of Chang and Eng?

The writer and narrator