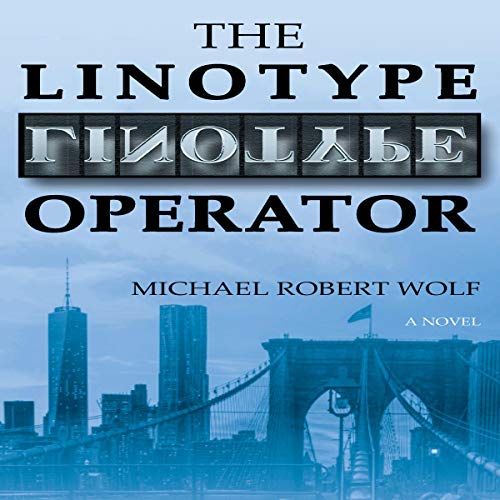 Set in present-day Brooklyn and Manhattan - with historic monuments and institutions as background characters - The Linotype Operator is the story of Orthodox Jewish former Linotype operator David Kaplan and his two daughters. Dutiful and religiously observant Naomi is 48 and single and lives with her father in Brooklyn. Her “prettier” younger sister, Lisa, is married, has two young children, and lives in the suburban community of Englewood, New Jersey. After meeting a handsome non-Jewish man at the Macy’s housewares department where she works, Naomi’s periodic daydreams begin to get the best of her - setting in motion a collision of worlds that can scarcely be contained in either Brooklyn or Manhattan. Sprinkled with wry humor, and including a cast of unusual supporting characters, The Linotype Operator gives the listener a deeply poignant look into parallel New York worlds and lives.

What listeners say about The Linotype Operator

Michael Robert Wolf has written a charming book that you will want to listen to again and again. The author narrates the book himself ,which is always a plus, because you get the right inflections and no mispronunciations.
The story line is engaging; set in the Burroughs of New York where we meet David Kaplan, a retired lynotype operator, and his daughters. Naomi, an unmarried Jewess in her late 40's, still lives at home and aims to please her devoutly Orthodox Jewish father by sharing his lifestyle and deep faith. The tension that threatens their idyllic father /daughter relationship arises when Naomi falls in love with an equally devout Christian man. Her personal struggle is handled by the author in such a way that you conclude he rely understands a woman's heart. There is a murder mystery, introduced in the opening chapter, that adds to a deeply satisfying book all around. And when you miss the characters at the end of your listening experience, the good news is that Michael Wolf has written a sequel, now in print, soon to be on Audible, called The Other: Continuing the Lynotype Legacy.