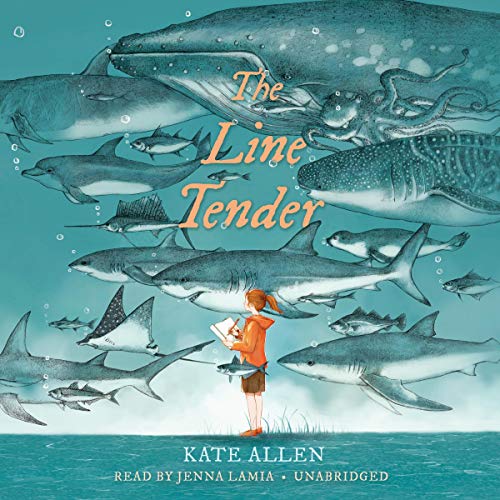 Funny, poignant, and deeply moving, The Line Tender is a story of nature's enduring mystery and a girl determined to find meaning and connection within it.

Wherever the sharks led, Lucy Everhart's marine-biologist mother was sure to follow. In fact, she was on a boat far off the coast of Massachusetts, collecting shark data when she died suddenly. Lucy was seven. Since then Lucy and her father have kept their heads above water - thanks in large part to a few close friends and neighbors. But June of her 12th summer brings more than the end of school and a heat wave to sleepy Rockport.

On one steamy day, the tide brings a great white - and then another tragedy, cutting short a friendship everyone insists was "meaningful" but no one can tell Lucy what it all meant. To survive the fresh wave of grief, Lucy must grab the line that connects her depressed father, a stubborn fisherman, and a curious old widower to her mother's unfinished research on the Great White's return to Cape Cod. If Lucy can find a way to help this unlikely quartet follow the sharks her mother loved, she'll finally be able to look beyond what she's lost and toward what's left to be discovered.

A Publishers Weekly Best Book of 2019

A Shelf Awareness Best Book of 2019

“In following the adaptation of sharks to a shifting ecology, The Line Tender speaks to our own human capacity to adapt to loss - and Lucy's losses are profound. This is a novel that stirs our deepest hope that we can survive profound change, that we can even move into new channels that will support us and nourish us and point us toward what we had never anticipated. This is a celebration of our ability to survive.” (Gary Schmidt, Newbery and Printz Honoree and National Book Award finalist)

"A vivid portrait.... Allen’s understated but richly detailed story will help young readers dig into their resilience to see how they, too, can draw connections in their lives." (The Minneapolis Star Tribune)

“This richly textured story calls us to our most pressing business on earth: to understand and respect the stunningly complex creatures around us before they disappear forever.” (Margi Preus, author of Heart of a Samurai, a Newbery Honor book)

What listeners say about The Line Tender

Jenna Lamia is so so so perfect as the narrator for Kate Allen’s beautiful story. She embodied all the big emotion and heart young people carry around each day, with strength and immense capacity. I will be buying the hard copy to enjoy all over again.

This is one of the best books I’ve ever read. Story is sincere and heartfelt. Characters are well fleshed out and it was so relatable. I loved every second of it!!

A wonderful book with healing powers

This beautiful story holds within its pages the power to help people of all ages process grief from the loss of a loved one. As a parent, there are many conversations initiated by the topics covered in the story line. As a reader, it was highly thought-provoking and enriching. As an educator, the plot is well-executed and themes are deeply meaningful. Overall, this has become one of my favorite books, and I can’t wait to share it!

Beginning of the year

I was intrigued by this book from the very beginning. I've been going to the Cape for 20 years ... it's my happy place. This beautifully written book takes you on a journey of emotions and helps you fully get invested in the characters. The story is so compelling and as a result of it, I have a newfound appreciation and love for ocean life. I have always loved the ocean.. the wonder of it all. I connected so much with this story and cried through many parts that broke my heart, and cheered through all the triumphs. If this isnt a book about growth mindset and believing in yourself, I dont know what is. I start work on Monday, and this will be the first read aloud I read to my 5th graders this year.