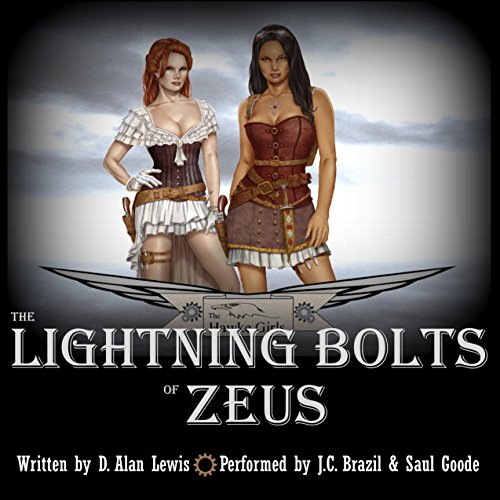 The Lightning Bolts of Zeus

Jasmine and Thyme Hawke are sisters and US Secret Service agents. While investigating what appears to be a simple train robbery along the troubled US/Mexican border, they uncover clues that suggest a larger conspiracy is afoot. An unknown force has discovered the resting place of a long-lost Confederate airship named Zeus. The Hawke Girls know that the aerial monstrosity carried the most powerful weapon ever built, a technology that has never been duplicated and if it falls in to the wrong hands could change the world.

Plagued with guilt over their mother's death, Jasmine struggles to keep herself focused on the mission, while her inexperienced younger sister is forced to come to terms with the difficulties of her first mission and her first taste of love.

Braving running gun battles, mechanized battlesuits, and aerial warships, the Hawke Girls travel from the American southwest to Cuba, and finally, to the jungles of southern Mexico, but will they find Zeus first or be forced to battle an enemy that wields the power of the gods?

What listeners say about The Lightning Bolts of Zeus

I truly liked this story, especially, the main characters: two secret agents undercover. It's a bond-sy type book set in the middle of a convinced historical war, and Jasmine and Thyme have to save the world from a ship hidden in the heavens before it abolishes everyone! A twisting and paced story. I really loved it!

What an impressive story is this. The main characters Jasmine and Thyme are great really. Finally, a book with female characters that have the reasons and smarts to out gun the best of their rivals. The action sections were high-paced and adrenaline powered, I couldn't pause it.

I am not done listening to the whole audio book since it is very long but I know from the beginning that this will be epic. Kudos to the author!

I loved the premises of this book

Jasmine and Thyme Hawke are investigators working for the U.S Government after the Secession War in an alternate world. They are after a stolen train loaded with guns, when they discover that a much dire conspiracy is behind it all.

I loved the premises of this book: two badass sisters investigating a conspiracy, all in a steampunk environment and described in a way that I was able to see how they were dressed and how their weapons looked like. It started as a great book, one that I was sure I was going to enjoy. But then they met the professor specialized in the Zeus, and his team, and it all started to be terribly predictable. I just wanted to be wrong, since it was so evident that it could not just be like that, but the bad guy was the one I was sure about all along. There was also a mystique element that did not quite convince me, but it is just a personal opinion.

I also found a mistake that could have been prevented with a very simple Google search. Lewis mentions Selene as the Roman moon goddess, and Luna its Greek equivalent. Well, anyone with a basic knowledge of any Roman language will know that it is the opposite.

I could have still enjoyed this book, since there is a lot of action and it is all very well described, but the audio production is one of the worst that I have stumbled upon until now. The narration was okay, although nothing special. There are two narrators in this book: J.C. Brazil for the main narrator and female characters, and Saul Goode for male characters. Brazil's monotone voice was something it took me some time to get used to, but everything was done correctly. Saul nevertheless was a bit sub-par. All male voices sounded the same, there were a couple of then with a different accent, but it was quite subtle. It just confused me, and I think I would have preferred just one narrator if it was going to be done like this. Goode's also produced some mouth noises that I found disturbing.

The audio production, as I have said, was disastrous. There were repeated sentences in eight occasions for Brazil, and two for Goode, but these two were not mere repetitions, since they included sentences like 'one more take' that were clearly meant to be left out of the final mix. I also had troubles with the volume. I think more care should have been taken in normalizing the final mix, especially when counting with two different narrators. Goode's parts were much louder than Brazil's, and I found it especially annoying since I tend to use headphones to listen to audiobooks.

This book had a lot of potential, but its predictability and the little care put into the audio production ruined it for me.