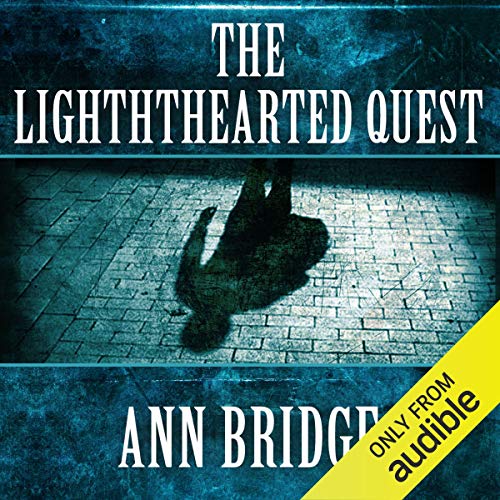 By: Ann Bridge
Narrated by: Elizabeth Jasicki
Try for $0.00

When Julia undertook to find her cousin, Colin Munro, last heard of sailing a yacht off the north coast of Africa, the quest seemed lighthearted enough. But, before she had finished, she was involved with Moorish antique dealers, a Belgian woman archaeologist, Purcell, the enigmatic barkeeper, and American airman, the saurian Mr. St. John, and numerous other characters charming or sinister. Julia's search takes her a cargo-boat to Casablanca, and thence to Tangier, Fez and Marrakech. Her 'dumb-blonde' beauty, camouflaging a lively intelligence, gets her through unexpected difficulties and dangers. Colin is found, and the mysterious reason for his disappearance at last revealed.

The first in a series of eight Julia Probyn novels, The Lighthearted Quest displays a blend of humour and adventure which transports us to exotic places and introduces us to entertaining people, but also throws a good deal of light on the explosive political issues that French Morocco encountered in the 50s.

Ann Bridge (1889-1974), or Lady Mary Dolling (Sanders) O'Malley was born in Hertfordshire. Bridge's novels concern her experiences of the British Foreign Office community in Peking in China, where she lived for two years with her diplomat husband. Her novels combine courtship plots with vividly-realized settings and demure social satire. Bridge went on to write novels around a serious investigation of modern historical developments. In the 1970s Bridge began to write thrillers centered on a female amateur detective, Julia Probyn, as well writing travel books and family memoirs. Her books were praised for their faithful representation of foreign countries which was down to personal experience and thorough research.

What listeners say about The Lighthearted Quest

Like all Ann Bridge’s books, amazing insights into countries, cultures, history, and physical beauties of nature.

A good story very much of its period but sadly read so appallingly badly I have to say don’t even think of buying it .

the worst reading I have ever heard

What would have made The Lighthearted Quest better?

A different reader. Elizabeth Jasicki has clearly taken on board the fact that the lead character, Julia, speaks a little slowly. The trouble is that she reads everything at half speed as a result (unless this whole recording is played at half speed) and it drove me so mad that I didn't finish the book, something I have never done before.

Would you be willing to try another one of Elizabeth Jasicki’s performances?

I think I've made my views clear. This is a great book, with a narrator who probably reads very well normally but has just not got it right this time. Avoid.