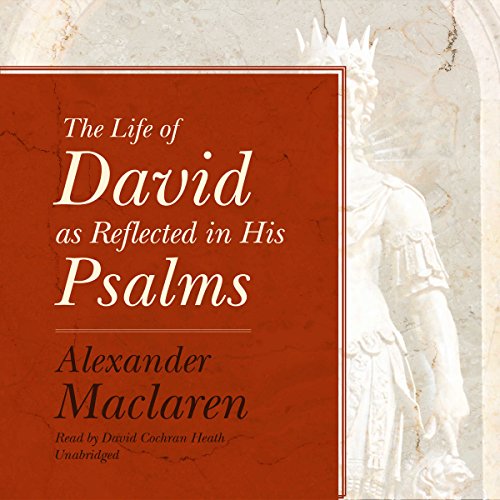 The Life of David as Reflected in His Psalms

By: Alexander Maclaren
Narrated by: David Cochran Heath
Try for $0.00

What a many-colored career that was which began amidst the pastoral solitudes of Bethlehem, and ended in the chamber where the dying ears heard the blare of the trumpets that announced the accession of Bathsheba's son! None of the great men of scripture pass through a course of so many changes as David; none of them touched human life at so many points; none of them were so tempered and polished by swift alternation of heat and cold, by such heavy blows and the friction of such rapid revolutions. These quick transitions of fortune, and this wide experience, are the many-colored threads from which the rich web of his psalms is woven.

And while his life is singularly varied, his character is also singularly full and versatile. In this respect, too, he is most unlike the other leading figures of Old Testament history. Contrast him, for example, with the stern majesty of Moses or the unvarying tone in the gaunt strength of Elijah. These and the other mighty men in Israel are like the ruder instruments of music - the trumpet of Sinai, with its one prolonged note. David is like his own harp of many chords, through which the breath of God murmured, drawing forth wailing and rejoicing, the clear ring of triumphant trust, the low plaint of penitence, the blended harmonies of all devout emotions.

(Adapted from the introduction)

Worthy of the Time Spent

The 5 hrs 42 mins to listen to this will gain you one third of your tithe of time for the week. And, it is an excellent way to study the life of King David. If you are serious about studying to show yourself approved, so that you can rightly divide the Word of Truth, studying the life of Israel's second king will be essential. Bible study is a serious matter, and diligent attention must be given. This is not a light, fluffy work. It is not fiction, but it is entertaining, in that it holds your attention, keeping your mind engaged.

I struggled a bit in the middle, because I was distracted by high winds while I was walking, and icy cold. I had to stop listening as I was freezing while being blown off the bike path/ walking trail. Also, I was disturbed by my lack of familiarity of some of the Psalms referenced. I then realized that it was not my fault entirely, but also that the entire Psalm referred to is not read in entirely. It is presumed you know the Psalms.

There was little reference to other Scriptures, and the worst fault is that the King James Bible isn't always used. That affects anyone's understanding because how something is said is as important as what is said. You must use great care and use your Bible. I suggest you take out a pen and paper and take notes. You will want to read each Psalm. The best way to do this is to have a copy of the book. I used the Kindle version.

The narrator is good. Solid, understandable. The pace, tone and rhythm work well.

Fascinating journey through the life of David!

Wow! Must listen! Fascinating journey through the life of David! It never occurred to me to read the Psalms through a historical lens. This book is so rich with information that I will need to listen to it again to glean even more from it.