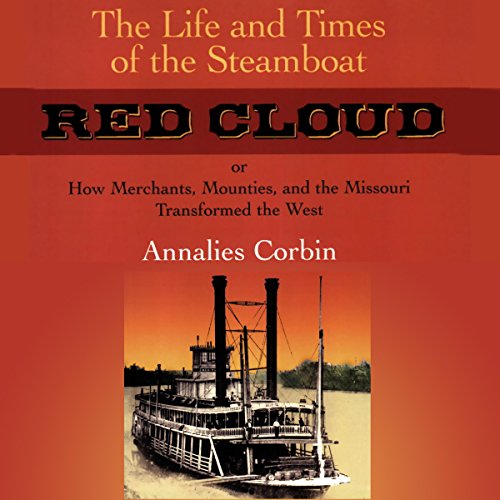 The Life and Times of the Steamboat Red Cloud, or, How Merchants, Mounties, and the Missouri Transformed the West

By: Annaliese Corbin
Narrated by: Greg Nelson
Try for $0.00

In July 1882, the steamboat Red Cloud hit a snag near Fort Peck, Montana, and settled into the bed of the Missouri River with a full cargo. The Red Cloud was a symbol-and a source-of the trading company's success. Bought for $25,000 in 1877, it was one of three boats that I. G. Baker employed on the Missouri. A stern-wheeled, wooden-hulled packet boat, the Red Cloud carried both cargo and passengers on a floating palace. But for all its success, when the ship sank only five years later, the transcontinental railroad was already displacing the steamboat as the preferred way to transport both people and cargo. The era of transformation symbolized by the Red Cloud was drawing to a close.

The first book to view the development of the Canadian Rockies from a maritime perspective, The Life and Times of the Steamboat Red Cloud ties the Missouri River's commercial development with the opening of the Canadian west and its most important communities, with the formation of the Canadian North-West Mounted Police and with the river by which they were supplied.

Readers interested in western history, maritime history, and nautical archaeology will find this well-researched and engagingly written book an invaluable addition to their libraries.

What listeners say about The Life and Times of the Steamboat Red Cloud, or, How Merchants, Mounties, and the Missouri Transformed the West