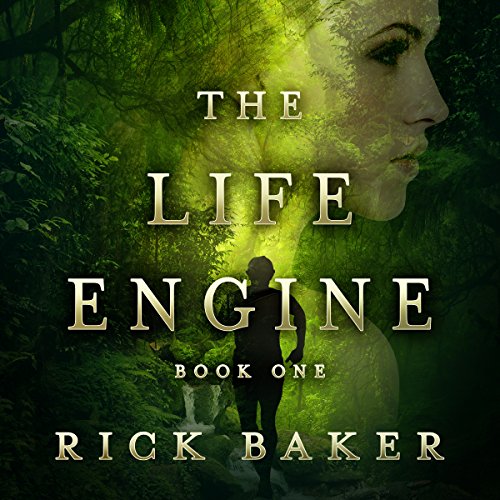 Ian Wolfe is not your typical CIA officer. A former Olympic decathlete whose face once graced the covers of teen magazines and cereal boxes, he was disgraced by a doping scandal, and now he is seeking to reinvent himself within America's intelligence community.

But Wolfe's first assignment could be his last, because it brings him face-to-face with April Gentry, world-renowned biologist and category four hurricane. Seeking to fulfill her late father's legacy, she will stop at nothing to bring a life-altering medication she discovered in the Amazon to market.

Both Wolfe and April's plans go awry when one of April's business partners hacks into sensitive spy satellite data. The CIA thinks April is involved and shuts down her operations. Wolfe suspects otherwise and offers to help April clear her name. There's just one catch: He'll have to defy the CIA to do it. Despite the fact April despises everything Wolfe represents, she agrees to his plan.

Pursued by every law enforcement agency in America, both Wolfe and April come to realize they may have misjudged the other and we see them drawing closer to each other while they are on the run. Meanwhile, far darker forces dog their trail in the person of Anakim Sebastian, a mysterious man who believes he is one of the angels of the apocalypse. Whatever else he may be, Sebastian is death incarnate, and he is coming for them.

What follows is a breathless adventure with action unfolding simultaneously on two continents. Pitting ancient arts and rituals against the modern techno world, little do the players realize the future of the planet - our life engine - hangs in the balance.

What listeners say about The Life Engine

This book was clearly very well researched. The strong environmentalist stand was pretty awesome in my opinion. The story and the characters are very well written. Full of action, drama and wry humor that had me laughing out loud often. The end was just awesome. Loved it. This was a fun and entertaining read that I couldn't put down.

I'm a Convert! Life Engine has much to commend it!

Where does The Life Engine rank among all the audiobooks you’ve listened to so far?

A thriller, full of action, exotic and more familiar locales, an ecological warning, great protagonists, an evil villian. Some strong language scattered moderately through the narration, so be forewarned if that's an issue. I would rank it in the top fifty in my library.

What was one of the most memorable moments of The Life Engine?

The chase scenes. There are several. The descriptive skills on the locales. And as important, the well done narration by Dylan White.

In all the Audible books I own, I enjoy the narrators that have believable differences of voice for character dialogue, the ability to convey appropriate feelings - fear, excitement, anticipation, loss, joy, etc for story telling and continuity. Dylan White possesses those skills. Adding to the overall success of the writing.

Wolfe and Gentry, remember those names.

Very enjoyable. I was skeptical that this could live up to what it promised. It works on many levels. I cared about the protagonists, I hated the villian, the mission(s) were enthralling. And there were several, what I'll refer to as "easter eggs" that were fun to discover. Again, an "Archer" reference to shooting technique and Who Framed Roger Rabbit?" prop reference. Others? Give a listen.

If you enjoy tired old formulas: odd-looking sociopathic villain, beautiful tough-minded protagonist who suddenly melts under the gaze of our almost-Superman hero, global conspiracy, big corporations - then this is for you.

What could Rick Baker have done to make this a more enjoyable book for you?

There were no surprises - it was all too predictable.

Would you be willing to try another one of Dylan White’s performances?

My real beef with this book was the narration. I'm not sure if it was the reader or the editor but one paragraph ran right into the next. One sentence you're in the Amazon and the next you're at CIA HQ. No pause, no breath, no nothing. Very disjointed and frustrating!

Dylan White narrates this book nicely.April is a biologist investigating a miracle cure.There is betrayal,espionage and a love story between these pages.It is well written, though I did lose the thread a bit.I was provided this book free by the author, narrator or publisher.

Would you be willing to try another book from Rick Baker? Why or why not?

What aspect of Dylan White’s performance would you have changed?

It just seemed a little bland to me.

If it got good reviews I would watch it. Or I might watch it and go back and listen to the book again.

This book was donated to me by the author with the understanding that I post an honest, unbiased review.

Are we manufacturing our own destruction? This book ranges far wider than simple climate change, encompassing the potential loss of life saving drugs and good old corporate (and personal) greed at the expence of everyone's future.All wrapped up in an exciting thriller.
With a promising, disease countering plant brought back from the ancient heart of Brazil, eco biologist, April, finds agreements reneged upon as the probable health giving effects of the plant become ever more likely - and valuable. Meanwhile, the very homeland of such diverse plants is being rapidly destroyed and, with it, not only the livelihoods of the indigenous populations but of everyone on the plamet. Some will give everything to stop this distruction. Others just want money or power and care nothing for the lives of others, or of posterity.
April's defiance of the super corporations brings her into a confrontation of mutual distrust which could easily condemn both herself and her supporters, and possibly the entire world population, to.early and inevitable extinction. But with vast fortunes at stake, who can she trust? Money has a way of distorting attitudes. And after she is injected with a mysterious, slow acting.poison it is down to just a few friends to not only save her life if they can but also let the rest of the world know how seriously their own lives are threatened.

This is a book in two parts: the message of how much is wrong with the way in which the pursuit of wealth is destroying local ecologies and their populations, stripped of their own means of survival, plus the damage being done to the whole earth, and the rip roaring tale of one woman's fate as she tries to stand up to the giants set on squeezing maximum profit from everything good. The former is true and terrifying, the latter a jolly good suspenseful isten. Dylan White's narration is good, continuing steadily even through some of the wildest of the adventures and he voices his characters well. However, lack of pauses to denote change of scenarios within chapters, often made for slight confusion over what was happening where and to whom. There were also some further technical glitches, such as slight volume variations but nothing of great note to spoil the enjoyment.
The author has obviously seriously researched his background material and interwoven the terrifying prospects throughout this intriguing thriller. Whether or not the reader believes that we are the cause of our own soon to destruction by climate change and global warming, the wider implications of how disregard of the effects of profit making agricultural assaults on already impoverished peoples make this a must read book which will leave a lasting impression. And, just perhaps, might even help save the planet.

My thanks to the right's holder of The Life Engine, from whom I received a complementary copy, via Audiobook Boom, to honestly review.

Spaceship earth with a twist

If you've ever been to Epcot in Disney world the life engine concept will be familiar (spaceship earth). Good setup and character development, nice plot twists, betrayals and more. The last few chapters will leave you clinging to the edge of your seat and laughing out loud at a few points. Can't wait for more! I received this audiobook from the author narrator or publisher for free via audiobookboom in exchange for an unbiased review

Started out good, then faltered :/

Note: In exchange for an unbiased review, the author, publisher, and/or narrator were kind enough to provide an audio version of this book at no charge via AudiobookBoom.

This book started out decently enough, with intriguing intro chapters, but not long after the first hour my interest started to wane significantly. I don't know if it was a combination of the narrator's performance (which felt a bit wooden after a while) and the writing, or if it was one or the other specifically. Either way, the characters and the overall story ended up feeling flat - especially during dramatic or action moments (of which there were only a few in the time I listened). Gave it 3 hours, then had to stop

I've paid for many a worse novel than this. I was gifted this audio book in exchange for an honest review. This book really rivals a James Patterson novel in action and professionalism. Although somewhat predictable, it was a really fun ride getting to that predictable end. I looked up Dylan White to see what else he has narrated and it was slim pickin's. I was really surprised. This guy has a great career ahead of him! Perhaps the next Scott Brick!
The story is fast paced, well researched, interesting and definitely leaves you wanting more. Highly recommend for those who like an intelligent action adventure.

I received this audible edition for my honest review.. very different and enjoyable.. suspenseful. wondering what will happen next .. highly recommended