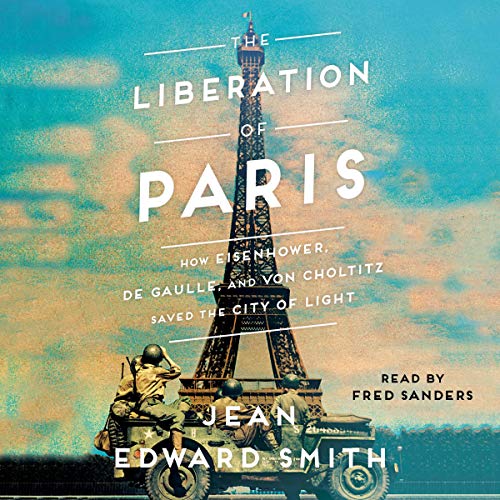 The Liberation of Paris

Prize-winning and best-selling historian Jean Edward Smith tells the dramatic story of the liberation of Paris during World War II - a triumph that was achieved through the remarkable efforts of Americans, French, and Germans, all racing to save the city from destruction.

Following their breakout from Normandy in late June 1944, the Allies swept across Northern France in pursuit of the German army. The Allies intended to bypass Paris and cross the Rhine into Germany, ending the war before winter set in. But as they advanced, local forces in Paris began their own liberation, defying the occupying German troops.

Charles de Gaulle, the leading figure of the Free French government, urged General Dwight Eisenhower to divert forces to liberate Paris. Eisenhower’s most senior staff recommended otherwise, but Ike wanted to help position de Gaulle to lead France after the war. And both men were concerned about partisan conflict in Paris that could leave the communists in control of the city and the national government, perhaps even causing a bloodbath like the Paris Commune. Neither man knew that the German commandant, Dietrich von Choltitz, convinced that the war was lost, dissembled and schemed to surrender the city to the Allies intact, defying Hitler’s orders to leave it a burning ruin.

In The Liberation of Paris, Jean Edward Smith puts this dramatic event in context, showing how the decision to free the city came at a heavy price: It slowed the Allied momentum and allowed the Germans to regroup. After the war, German generals argued that Eisenhower’s decision to enter Paris prolonged the war for another six months. Was Paris worth this price? Smith answers this question in his superb, dramatic history of one of the great events of World War II - published 75 years after the liberation.

What listeners say about The Liberation of Paris

A great story, told with authority

Those who've read "Is Paris Burning?" a 1965 best-seller by Larry Collins and Dominique Lapierre, will not be surprised by the outcome of this story. Paris is liberated by the Americans, by the French army, and by its own citizens, and it is not blown up or burned down in the process. Still, it's worthwhile hearing the story told with authority and precision by a first-rate historian. It's an exciting story and an inspiring one. It's probably safe to say that for many of the participants on the Allied side who were in Paris while it was happening or being celebrated, it was one of the highlights of their lives. The disagreements and debates among the Allied leaders -- de Gaulle, Churchill, Roosevelt, Eisenhower -- are interesting, but the mystery here is the behavior of von Choltitz and his immediate German superiors in France. Why did they disobey der Fuhrer's direct orders to destroy the place, and how did they get away with their disobedience? Full marks to Jean Edward Smith for telling a gripping story, and to Fred Sanders for narrating it so ably.

A detailed exposition of an interesting subject presented, unfortunately, in a manner which fails completely to engage the listener. In large part this is due to the unimaginative style of writing and the fact the text contains a considerable amount of extraneous information, although the flat and somewhat monotonic delivery certainly doesn't help. Very disappointing.