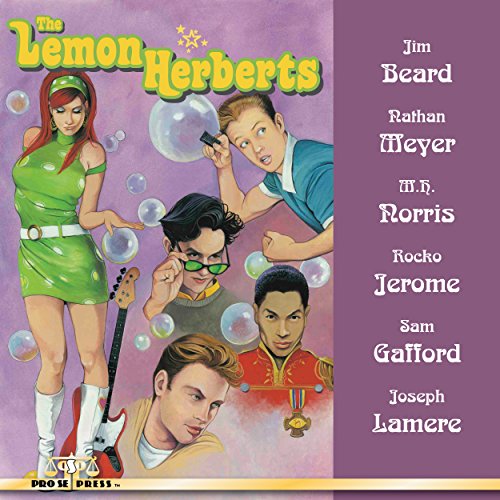 Madness! Beat it, Beatles! Move over, Monkees! Roll it up, Rolling Stones! Here comes the greatest, grooviest, gearest rock-and-roll group of all time: The Lemon Herberts! Hot on the heels of their chart-topping hit album, Redwing Blackbird's Summer Solstice Tea Party, the Lemon Herberts launch themselves on their very first world tour - and straight into more danger, more peril, more sheer adventure than they ever bargained for! In six kicky, pulpy, far-out tales, you'll meet drummer Ellroy, guitarists Honor and Dilly, bassist Ally, and the gorgeously fab Her Majesty - trouble-magnets that even their long-suffering manager, the mysterious Brighton Hawks, can't hope to contain. Just ask the Lemon Herberts' legion of screaming fans: they're wild, they're wonderful, they're simply the most! Herberts creator Jim Beard leads a band of groovy authors for a New Pulp collection that will have you tapping your toes and humming along as the Lemon Herberts conquer the world, shining their music into hearts both dark and light around the globe!

What listeners say about The Lemon Herberts

A truly wretched read with a persistent, annoying lisp and absolutely no inflection or range when performing dialog. Given that the authors are patting themselves on the back for their "NEW Pulp" pastiche of a half dozen Scooby-Doo Doo clones, I don't see myself seeking out any of their other works either.