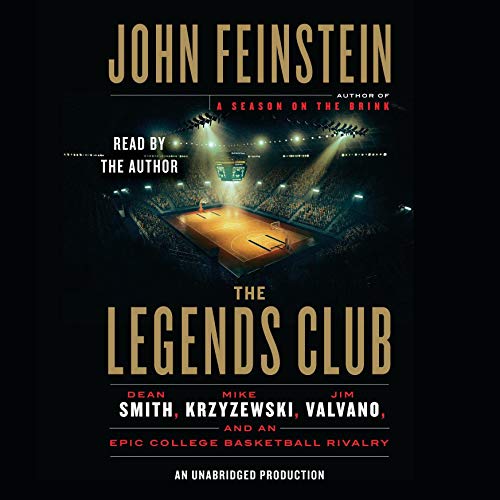 On March 18, 1980, the immensely powerful Duke basketball program announced the hiring of its new coach - the man who would resurrect the team, restore glory to Duke, and defeat the legendary Dean Smith, who coached down the road at UNC Chapel Hill and had turned UNC into a powerhouse. Duke's new man was Mike Krzyzewski. The only problem was, no one knew who Krzyzewski was; he had a so-so record in his short time as head coach of Army; and, worst of all, no one could even pronounce his name. The announcement caused head scratches, if not immediate calls for his head...and on this note, his career at Duke began.

The table was set nine days later, on March 27, 1980, when Jim Valvano was hired by North Carolina State to be their new head coach. The hiring didn't raise as many eyebrows, but with the exuberant Valvano onboard, two new coaches were now in place to challenge Dean Smith - and the most sensational competitive decade in history was about to unfold.

In the skillful hands of John Feinstein, this extraordinary rivalry - and the men behind it - come to life in a unique, intimate way. The Legends Club is a sports book that captures an era in American sport and culture, documenting the inside view of a decade of absolutely incredible competition. Feinstein pulls back the curtain on the recruiting wars, the intensely personal competition that wasn't always friendly, the enormous pressure and national stakes, and the battle for the very soul of college basketball allegiance in a hotbed area. Getting to the roots of the NCAA goliath that is followed religiously by millions of fans today, Feinstein uses his unprecedented access to all three coaches to paint a portrait only he could conjure. The Legends Club is destined to be one of Feinstein's biggest best sellers.

What listeners say about The Legends Club

Such a tremendous story from the greatest college basketball writer of our time. As a lifelong Tar Heel fan listening to how Coach K visited Coach Smith at the end got to me. I was listening in my truck and had to pull over to take a minute. Feinstein did it again, well done sir!

An absolute must for college basketball fans

I grew up in NC, the heart of ACC basketball country. This book is a must listen for anyone like me who loves ACC basketball. I grew up loving NC State, hating UNC and Duke was kind of neutral at that point. Pre Coach K really getting his program going they didn't win enough in my youth to hate. This book is about the clash of Legends. The established king of the block was Dean Smith at UNC. The new guy who excelled fast was Jim Valvano, winning a national title in his third year at N.C. State (and making me super happy as a high school sophomore). The late bloomer who would eclipse them all in the long run was Coach K at Duke. It's a great book with stories that even I hadn't heard as a rabid ACC fan of the era. What impressed me most were the detailed sections on the hiring of each of the 3 Legends. Currently when big time schools go through a coaching search it is not considered a success unless the school hires an established star or a can't miss up and comer. By today's standards UNC, Duke and NC State all failed in hiring these future Legends. At the time each was hired their resumes were not that impressive. Smith was an assistant who had not coached a game as a head coach. K had a losing record at Army the year Duke hired him. Valvano had limited success at Iona, but was by no means a can't miss coach. However, what the AD at each school knew was that you rarely hired a great coach, but you can hire a coach who has the potential to become great. The AD at each of these three schools did that and Feinstein does his usual great job in telling their stories.

I love college basketball and am a huge UNC fan, so listening to this was a no-brainer. But it's about way more than just basketball. You really get an appreciation for these men, flaws and all. It's at times funny and sad, and always fascinating. I really liked that the author did the reading. It means it was read as it was meant to be. I highly recommend this book!

Must read for any college sports fan

this was a great Bugg I know the story of Jim Valvano from what I read over the years mostly about him creating the V Foundation. reading about Coach K was amazing because I've always really liked him Dean Smith I didn't know much about so I learned a lot about him but this is a great story for any college basketball fan or any college sports fan really

A must read for any Duke, UNC or State fan. Great history, peels the media lens of the programs and reveals the true innermost workings of the basketball programs.

Feinstein made you feel as if you were there every moment. It was great to hear how three came together and although they had differences they were one! Great book!

A good history of the greats from a duke perspective

The book enjoyably reviews through duke colored glasses the men and many seasons to which I was a first-hand witness. The author discloses that he is a Duke graduate but otherwise represents himself as impartial. HE IS NOT. Any compliment that Feinstein offered to Dean Smith regarding his positive actions and words, he then undercut more than 85% of the time by offering ulterior and ignoble motives. Coach K, in contrast, was treated with leniency and grace regarding all of his actions and words throughout. It seemed likely that K would be inducted into Hall of Fame alongside Mother Theresa rather than Bob Knight! The focus on games and records similarly is selective. All the same I really enjoyed the insight into Coach K with whom the author clearly spent the most time. The book is still fun but just be aware before purchasing that it is a Duke document. Enjoy!

Great book, good read. Enjoyed the behind the scene information and the historic background of these three great coaches.

A well-written story of the greats in basketball history. Great insights, dramatic detail, and tales that reveal a bit of passion and emotion of these Legends.

A pleasure to listen. A lesson in the history of basketball and coaching. Great job.