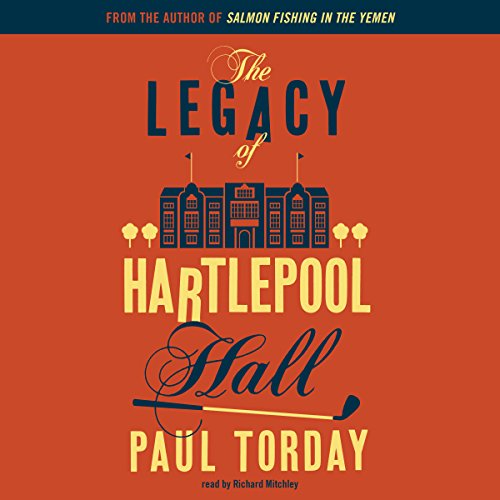 The Legacy of Hartlepool Hall

By: Paul Torday
Narrated by: Richard Mitchley
Try for $0.00

From the best-selling author of Salmon Fishing in the Yemen comes a story of inheritance, a great country house, and a way of life that is disappearing...Ed Hartlepool has been living in self-imposed exile for five years, but with a settlement regarding his inheritance looming, he must return to his ancestral seat, Hartlepool Hall.

On his return, he discovers that his father has left him, along with the house, a seven million pound tax bill, two massive overdrafts, an 80-year-old butler, and a vast country estate that is creaking at the seams. Not only that, but there is a strange woman in residence - Lady Alice - who seems to have made herself very much at home.

With the debts mounting, it seems that Ed's only recourse is to turn to his friend Annabel's new boyfriend, a property developer who plans to turn Hartlepool Hall into luxury flats and a golf course. But can Ed save his inheritance without such a drastic move? And is Lady Alice really the person she claims to be?

What listeners say about The Legacy of Hartlepool Hall

Or maybe it's just me—I found the relentless human, financial and emotional stupidity of the main character depressing; I'll skip to the end to see what machinations get him out of his entitled, parasitical aristo troubles, but only to settle my mind.

I still am not exactly sure of what the point of this book was except to make it very clear that individuals make very bad life decisions often. I kept thinking there was going to be a plot with a point or a plot that was going somewhere, but I don't think a plot ever really developed. I finished the book with a "hunh??" I guess I am glad that I listened to it. I don't want to listen to it again. I do want to make good life decisions, even more now than ever, and clearly money does not equal happiness, but I don't think I needed to listen to this book to arrive at these decisions!

This book is full of dark humour which you sometimes find yourself smiling at despite the subject matter not being something you should be smiling at. At the beginning of the book I thought the story was going to be more farce-like but actually turned out to touch on some fairly serious subjects with feeling and pathos. The only think I found slightly annoying was that it almost felt like the story was written and then the editor moved some chapters around to add a level of suspence/surprise to the story. However, when the 'truth' was revealed it was never a great surprise so it might have been better just to tell the story straight, so to speak. It was very well read and I will look for more books by this narrator, and look forward to more books by this author.

Torday was a master at creating intriguing books full of unsympathetic hideous characters. And this is another.
Yes, the rich folk plot is a bit unsubtle and clonky but it's more about slow character reveals than superficial social commentary. You are drawn into their minds to understand their actions and reactions.
It's not Downton, and it's not trying to be.