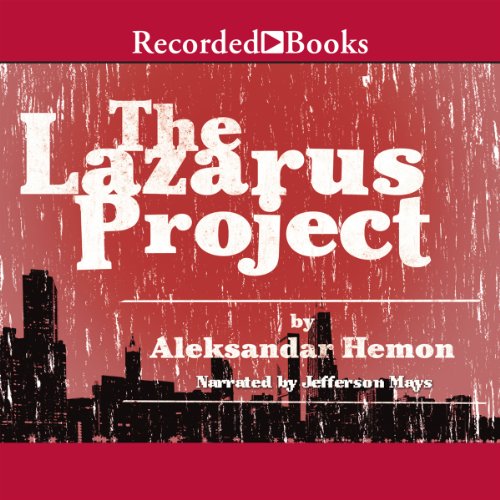 By: Aleksandar Hemon
Narrated by: Jefferson Mayes
Try for $0.00

In two collections of stories, The Question of Bruno and the NBCC-finalist Nowhere Man, Aleksandar Hemon has earned unmatched literary acclaim and a reputation as one of the English language's most original and moving wordsmiths. In The Lazarus Project, Hemon has turned these talents to an embracing novel that intertwines haunting historical atmosphere and detail with sharp and shimmering-sometimes hilarious, sometimes heartbreaking-contemporary storytelling.

On March 2, 1908, nineteen-year-old Lazarus Averbuch, a recent Jewish immigrant from Eastern Europe to Chicago, knocked on the front door of the house of George Shippy, the chief of Chicago police. When Shippy came to the door, Averbuch offered him what he said was an important letter. Instead of taking the letter, Shippy shot Averbuch twice, killing him. When Shippy released a statement casting Averbuch as a would-be anarchist assassin and agent of foreign political operatives, he all but set off a city and a country already simmering with ethnic and political tensions.

Now, in the twenty-first century, a young writer in Chicago, Brik, also from Eastern Europe, becomes obsessed with Lazarus's story-what really happened, and why? In order to understand Averbuch, Brik and his friend Rora-who overflows with stories of his life as a Sarajevo war photographer-retrace Averbuch's path across Eastern Europe, through a history of pogroms and poverty, and through a present-day landscape of cheap mafiosi and cheaper prostitutes. The stories of Averbuch and Brik become inextricably entwined, augmented by the photographs that Rora takes on their journey, creating a truly original, provocative, and entertaining novel that will confirm Hemon once and for all as one of the most dynamic and essential literary voices of our time.

"There's pathos and outrage enough to chip away at even the hardest of hearts." ( Publishers Weekly)

What listeners say about The Lazarus Project

This is a book I started reading in print, and after misplacing it I decided to finish it via Audible.

Although other reviews were not promising, I went forward with it. Narration is peculiar, which is something I got used to quickly and it actually turned to be excellent. The story is wonderfully written, and definitely recommendable.

Worth Listening to, but Purchase a Paper Copy

Rora is wonderfully bright and is the driving force behind the narrative.

The reader does a really good job at bringing the characters to life. The story itself is intriguing, and keeps you engaged. Having the book to look at the photographs while you follow along is well worth the purchase price, as the photographs are meant to be part of the book.

I want my 1 book credit back

Could not have been more boring. A somewhat interesting parallel between current day terrorism and turn-of-the-century anarchism, but otherwise, this novel was a big yawn. I struggled to finish it. Maybe something was lost in the translation.