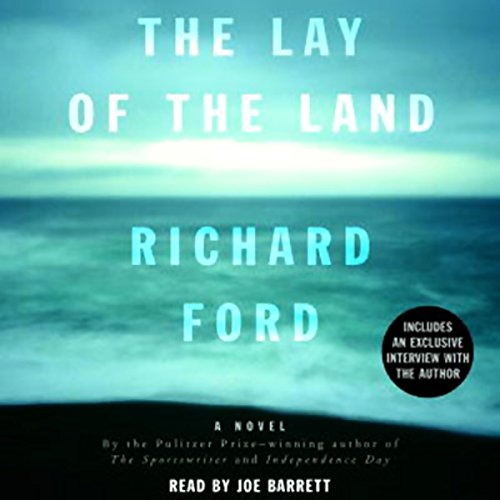 The Lay of the Land

By: Richard Ford
Narrated by: Joe Barrett
Try for $0.00

With The Sportswriter, in 1986, Richard Ford commenced a cycle of novels that, 10 years later, after Independence Day won both the Pulitzer Prize and the PEN/Faulkner Award, was hailed by The Times of London as "an extraordinary epic [that] is nothing less than the story of the 20th century itself." Now, a decade later, Frank Bascombe returns, with a new lease on life (and real estate), and more acutely in thrall to life's endless complexities than ever before.

His story resumes in the autumn of 2000, when his trade as a realtor on the Jersey Shore is thriving, permitting him to revel in the acceptance of "that long, stretching-out time when my dreams would have mystery like any ordinary person's; when whatever I do or say, who I marry, how my kids turn out, becomes what the world, if it makes note at all, knows of me, how I'm seen, understood, even how I think of myself before whatever there is that's wild and unassuagable rises and cheerlessly hauls me off to oblivion."

But as a presidential election hangs in the balance, and a postnuclear-family Thanksgiving looms before him, along with crises both marital and medical, Frank discovers that what he terms the Permanent Period is fraught with unforeseen perils: "All the ways that life feels like life at age 55 were strewn around me like poppies."

This is a holiday, and a novel, no reader will ever forget, at once hilarious, harrowing, surprising, and profound. The Lay of the Land is astonishing in its own right and a magnificent expansion of one of the most celebrated chronicles of our time.

"The third and most eventful novel in the Frank Bascombe series." (Kirkus Reviews)
"Ford summons a remarkable voice for his protagonist, ruminant, jaunty, merciless, generous and painfully observant, building a dense narrative from Frank's improvisations, epiphanies and revisions." (Publishers Weekly)
"As ever the drama is rooted in the interior world of its authentically life-sized hero, as he logs long hours on the highways and back roads of New Jersey, taking expansive stock of middle-age defeats and registering the erosions of a brilliantly evoked landscape of suburbs, strip malls and ocean towns." (New York Times Book Review)

What listeners say about The Lay of the Land

Richard Ford, get out of my mind!

Richard Ford has written one of those books that make you believe he has been reading your mind for years. If you are a middle-aged suburban man, Frank Bascome is as real as the guy you see in the mirror every morning. We have the tendency to think our personal experience is unique, but a good author that so perfectly recreates your experience can let you see how universal life's story's are. I find it liberating and humorous to realize my situation is not as unique as I thought, hearing another man struggle with the same questions puts my fears and doubts in perspective.

Wisdom from the realtor

Richard Ford has to be one of the best writers working today. Each sentence, wonderfully narrated, is packed with meaning. The strength of this novel is not plot but character. You get to know Frank, and in the process he teaches you a great deal about how to learn to accept life, family, and a variety of other imperfections. There is a great deal of wit here - I agree with the reviewer who found delight in Frank's visit to the Lesbian bar while waiting for his car to be repaired across the street. But I would say that the wisdom in this book is what finally makes it such a good one. Frank learns to accept what his life has given and to accept and even love the people he encounters. I had the feeling several times that Frank is a better person than I am, or at least a much wiser one. Frank a very likeable man - one I would delight in purchasing a house from - but also a very wise man who has embraced all that life offers with a serene intelligence that is at the same time pragmatic and down to earth. The narrator is excellent, with just the right timing for those marvelous sentences. This is one great listen.

I liked this book quite a lot. There were several times that I laughed out loud so I consider the book to be quite funny. There's a really funny part that takes place when the main character (1st-person narrative) ends up stuck in a lesbian bar while waiting for his car to be repaired. The author is able to make events funny, while drawing out the seriousness and trouble that clouds our lives from time to time.

Not a lot happens in the book in terms of plot (at least until the last parts of the book). There are long and detailed descriptions of events, people, etc. that might cause many to call the book "slow." At first, that was a little off-putting, but eventually, I came to understand what the author was doing, and that style didn't make any difference to me at all at the end. I was sorry to have it end.

The narration was first rate. The reader put effort into different voices for each character, and did lots of accents (southern, midwest, East Indian and others) all of which I enjoyed.

(There's a sixteen-mintute interview with the author after the end of the book, so it's not actually a 24 hour 57 minute book.)

Can anyone alive turn a phrase better than Richard Ford? I believe listening to or reading good language can enhance the listener's/reader's language facility. Both writer and reader of Lay of the Land are inspiring.

A Wonder of a Book

After an 11-year hiatus, the Pulitzer prize-winning author revisits his most enduring character, Frank Bascombe, a former sportswriter turned real estate agent. Bascombe, now 55 years old, newly divorced, battling prostate cancer, has reached the Permanent Period: "the time of life when very little you say comes in quotes, when few contrarian voices mutter doubts in your head, when the past seems more generic than specific, when life's a destination more than a journey and when who you feel yourself to be is pretty much how people will remember you once you've croaked. . . ." It's Thanksgiving week, and Frank Bascombe narrates with an armchair philosopher's appreciation for everything from the route he drives to work to the grandest themes in everyday life as he navigates the highways and byways of the Garden State. His two grown children (his "reformed" lesbian daughter and his emotionally removed son who pens greeting cards for Hallmark), his Tibetan business associate, Mike Mahony, and his ex-wife Sally, all come under his highly entertaining scrutiny. Although the book could be criticized for taking pages to describe the simplest interactions, with detail that can be overwhelming numbing, the very notion of this novel is that the drama is in the details of our non-dramatic lives. The audio format lends itself to such expository story-telling, and the narrator -- who sounds like I envision Frank Bascombe sounds -- enhances the tale.

This was a read about everyday life, in an area of the US I’ve never visited, and from the viewpoint of a man in the decade of his life I’m preparing to enter. Character, Frank Bascombe has great insight and amusing portrayals of family members, neighbors, and friends. I may have to go back and read the previous Richard Ford novels about this character. The book did move a little slow, but I smiled quite a bit, and it was a nice change of pace from fast action or high intrigue.

I’ve been working my way through the list of Pulitzer Prize winning fiction. Unfortunately Richard Ford‘s book “Independence Day” was on the list. it is the 2nd book of a trilogy. That made me think I should listen to book one to understand book 2. What a mistake. I got sucked into the trilogy, Hoping and anticipating with each book that surely it would get better. It didn’t. My mind is blown that this series of books could have five star ratings and one of them could have been a Pulitzer Prize winner. What in the world is going on?

My belief that Pulitzer Prize winners would have literary merit made me hang in to get through this trilogy buy wow, it was tough. It is nothing but the repetitive, never ending ramblings of a shallow, passive aggressive guy who never evolves. His musings are not profound or enlightening but rather the stream of consciousness of a VERY ordinary (I would say sub average) man. I felt like I was stuck in a small car on a cross country trip with the biggest bag of wind on the planet, submerged in his self indulgent mediocrity.

The best thing about this audiobook is Joe Barrett. His narration is stellar but even the sound of his wonderful voice can’t turn this bore into anything worth your time.
Listen to 10 minutes and you’ve heard everything this guy has to say. He continues for 3 novels to say the same thing over and over and over...

A fantastic book. It contains all segments of real, ordinary life. All people who read this book can find all sorts of events that they themselves have been experiencing.
The book deals with death, humour, embarrasment,
guilt, joy, yearning and so on.
Those who read it have to be patient and can not expect any suspence or "drama".
This is a book where the reader just have to listen intently to all the details given along the way.
To me this book should belong with the "classics".

I loved it, but realize what your getting.

If you like Richard Russo style musings of a story that tends to slowly unveil through the eyes of a middle age male (of which I am...) then this is a great book. I loved it and was not happy when, at first, this was the only Audible Richard Ford book.

My daughter is all about Jodi Picoult and the new Twilight books. Clearly they meet her needs as a teenage reader, although I find them overwritten, melodramatic tripe.

And this is my point: This book met me where i was at, and is a great read for those looking to see how a big segment of middle age white guy thinks and sees much of the world. I suppose for many, this would seem silly...but I loved the writing and the narration was great.

This is the first audiobook (out of over 150) that I couldn't finish. I almost made it through the first third, but realized that I had sufficiently experienced the mid-life crisis about which the narrator is perpetually expounding. I found myself repeatedly telling him, almost out loud, to get over it. At the point that I stopped no plot had been established. I don't give up easily, having managed to complete Proust's "Swann's Way", which was no easy feat. "The Lay of the Land" is comparable to "Portnoy's Complaint", it is difficult to maintain any empathy with the narrator. Don't waste your time on this one!