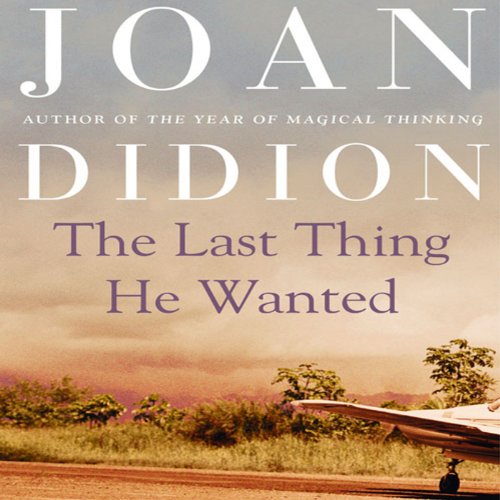 The Last Thing He Wanted

By: Joan Didion
Narrated by: Elisabeth Rodgers
Try for $0.00

The legendary author of Play It As It Lays and Slouching Towards Bethlehem here trains her eye on the far frontiers of the Monroe Doctrine, where history dissolves into conspiracy (Dallas in 1963, Iran Contra in 1984), and fashions a moral thriller as hypnotic and provocative as any by Joseph Conrad or Graham Greene.

In that latter year, Elena McMahon walks off the presidential campaign she has been covering for a major newspaper to do a favor for her father. Elena's father does deals. And it is while acting as his agent in one such deal - a deal that shortly goes spectacularly wrong - that she finds herself on an island where tourism has been superseded by arms dealing, covert action, and assassination.

The Last Thing He Wanted is a tour de force - persuasive in its detail, dazzling in its ambiguities, enchanting in its style.

"This is a major work by one of the shrewdest observers of America's political and cultural life." ( Publishers Weekly)
"Simultaneously lucid and surreal...the result is entrancing." ( The New Yorker)
"Dark detail, understatement and intelligence work their astonishing magic." ( The New York Times Book Review)

Featured Article: The Best Literary Adaptations to Stream in 2020


At-home entertainment has become a big part of our daily lives, offering a needed escape and an alternative to the social outings and live events that are currently on hold. We’ve been settling in with all the new shows and films that began streaming in 2020—and as you might expect, we’re most excited about the ones based on our favorite audiobooks. You can look forward to staying in these worlds a little bit longer with these streaming adaptations.

What listeners say about The Last Thing He Wanted

This was not a well written book. The story itself should have been great—but instead of setting the scene and letting the natural intrigue shine through the author uses an veiled style I just found obnoxious and distracting—it felt like how an immature high school student writer might attempt to create intrigue.

I have listened to this book twice. I have no idea what it is about. The narrator was great but I just don't understand the story.