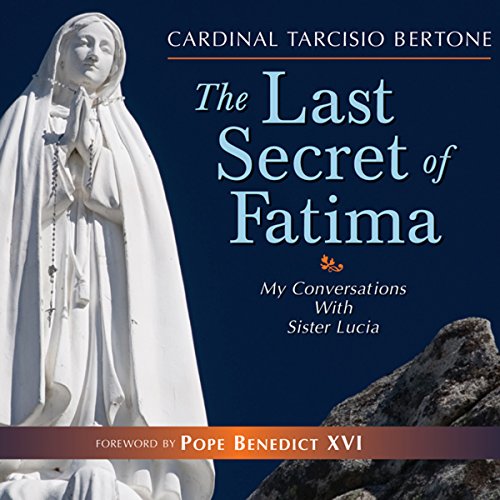 The Last Secret of Fatima

Cardinal Bertone, the Vatican equivalent of prime minister and a top advisor to Pope Benedict XVI, breaks the Vatican's official silence on this last secret. Rather than Armageddon, he claims, the final prophecy envisaged the 1981 assassination attempt on Pope John Paul II. Bertone argues the apparition at Fatima was a call to renewal for the Church, and the Pope assigned him the task of promulgating this message.

"The book also discusses the significance of the visions to the late Pope John Paul II, who believed his assassination attempt was foretold in the last secret and emphasized the vision's essential purpose of calling people to conversion." ( Publishers Weekly)

What listeners say about The Last Secret of Fatima

Nothing new. And it is very repetitive. I thought I accidentally started at chapter 1 and I was already past chapter 7.

More than just the Last Secret

Where does The Last Secret of Fatima rank among all the audiobooks you’ve listened to so far?

Quite high. The stories of the Fatima experiences in context with political, Vatican and personal histories were very interesting. The use of 3 different narrators (for Cardinal Bertone, Guiseppe de Carli, and Sister Lucia) really worked well for this audiobook. At first though, the interview style between Guiseppe de Carli and Cardinal Bertone was confusing because de Carli isn't mentioned anywhere in the details of the audiobook.

All three narrators were excellent, bringing an unhurried and expressive approach to the text.

There was much more Vatican and doctrinal discussion than I anticipated, and it tended to go on a bit too long for me. Most of the time, though, it provided historical context. The chronology of events was very good. Hearing about all 3 Secrets, Sister Lucia and Pope John Paul II were well worth it. The overall message of faith was very positive.

there is so much information on Sr. Lucia and the event's of the visions of Fatima.