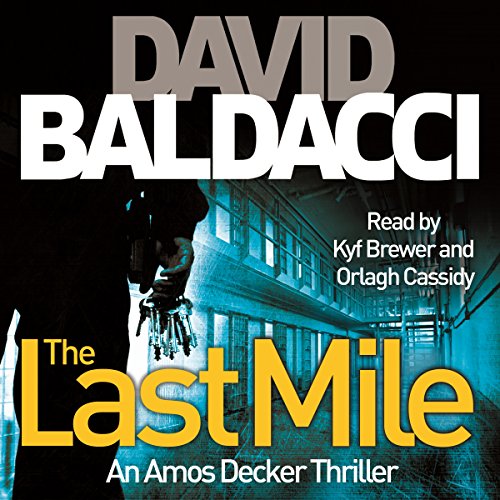 By: David Baldacci
Narrated by: Kyf Brewer,Orlagh Cassidy
Try for $0.00

Memories can be a real killer.

Melvin Mars awaits his fate on death row. He was one of America's most promising football stars until, aged 20 years old, he was arrested and convicted for the murder of his parents - just as he was due to begin a very lucrative contract with the NFL.

When Amos Decker, newly appointed special agent with the FBI, hears the news that Melvin was saved in the final seconds before his execution because someone has confessed to the killings, he persuades his boss to allow him to carry out an investigation into the Mars murders. There are facts about the case which don't add up, and as the investigation deepens, Decker and his team uncover layer upon layer of lies and deception rooted at a time in American history which most would rather forget, but some seem keen to remember.

There is someone out there with a lot to hide and a secret that everyone is looking for. A race against time ensues, because when revealed, that information threatens to tear apart the corridors of power at the very highest level. The case proves to be life-changing for both Mars and Decker in ways that neither could ever have imagined.

What listeners say about The Last Mile

David Baldacci impresses me in a way I had not previously considered in The Last Mile
because the hero, ex-cop, private eye Amos Decker, has unexpected unique qualities.
He's not your typical leading man of detective literature. In fact, he's a big, fat
slob - obese, ill-clothed, socially awkward and totally un-graceful. But not forgetful.
He has a perfect memory, resulting from a sports injury, which makes him smarter than
you think he is. When he thinks, he forgets everything else, like who he's talking to
at the moment. But, he remembers seemingly insignificant facts related to the crime
that help him solve it. If he saw a car back in the day, he can tell you, now, its
license plate number, and that may identify the murderer. It seems that Baldacci had
a eureka moment and is creating some fun by giving Amos such an unpredictable weapon.

The first book featuring amos decker was great. The voice of amos in this makes him sound like a kid rather than the character that was first created.

Overall, the book is nice. Performances are better than the story!

Excellent read, definitely worth it! Amos Dekker is definitely becoming one of my favourite characters!

A truly riveting story well written and equally well told. Recommend to anyone who loves a gripping story.

Another solid read from Baldacci!

Simply great! The books by Baldacci have been among my absolute favourites since I started listening to books. The pair of narrators are also amazingly good and I simply can't understand why so few books are narrated by only one actor. It is really great to have a female voice for all women and a male for all men in the story. When both are acting their characters out so well it really adds an extra dimension to an already interesting story.

Melvin Mars is in the 'dead cell' awaiting his execution for killing of his parents twenty years earlier, when another man confessed to the crime.

Amos Decker and his new team at the FBI decide to take an interest. They will prove. one way or another. the truth of the matter.

Amos Decker, a socially inept and obese character, is an unlikely hero.

Baldacci is an amazing storyteller and Amos Decker definitely one of his best characters! More please.

The first book in this series was a good one but with The Last Mile Baldacci moves smoothly into top gear. While the opening volume was slower due to the need to setup the characters and background this one feels perfectly paced. It delivers an entertaining story smoothly with the author showing increasing confidence in his characters. Gone is the need to explain Decker's complex background and medical condition, that aspect is now limited to small and occasional reminders.

The dual-aspect narration is more smoothly produced and Kyf Brewer is a more upbeat male voice which further boosts the tempo. The opening scenes on Death Row are one of the highlights of the book.

With these improvements this promises to be a very successful series with the potential for longevity should Baldacci so choose. This story is a similar mystery to the first where the devil is in the detail and the smallest of clues turn out to be important.

So, if you enjoyed the first book you may well find yourself liking this one even more. The story comes to the fore over the character backgrounds and leads up to an exciting conclusion. If you haven't read the first book then I wouldn't advise jumping straight into this one as you will miss out on the carefully constructed back stories for the characters.

In summary, a five star thriller all the way!

The amount of stars I submitted shows how much i enjoyed listening to the storey, April cannot come quickly enough for me to listen to The Fix .

Well narrated, as done badly it's very off putting.
Interesting story that keeps moving, more than worth a listen.
Keeps listener entertained @ all times.

Couldn't suspend my disbelief long enough to enjoy this

Judging from the other reviews, I'm the only one who didn't quite enjoy this :/ After loving Memory Man to death, I was fully prepared to love The Last Mile as well. Sadly, there was an element to the plot (why Melvin really ended up in prison) that I just hated and found very unbelievable, despite the explanations in the book. It was an entertaining book but a bit disappointing.

Good but not as good as the first in this series

I enjoyed this book but felt i knew what was coming before it happened. I liked the first book in this series better. I was eager to listen to this because of that one but although it held my attention i am not eagerly waiting to hear the next.

I loved this story it was everything rolled into one ! it was even sad ,happy, exciting, and fingernail biting ! I love Amos.

another wonderful story
talented narrators kept me listening in marathon length sessions
I'm almost becoming antisocial as I cant wait to disappear back into the world of amos decker.
I enjoyed attlee pine as well .. . now huge fan of amos and intrigued with his unique condition.

Enjoyable story but with more holes in the plot than I could count. I enjoyed the first book in this series much more.

they changed the voice talent for Decker , similar but different enough story from Memory Man. Maybe the next one will be as good as the first as this wasn't

I really enjoy the pace of the story and logic stream that Decker can follow. Looking forward to the next book in the series

One of the best books I have heard. Hit the right places at the right time for me

I liked the characters, the story,. The ambience which was created. The values that the characters held, humorous moments. A brilliant book.

Enjoyed this book. Went for a walk whenever I could so I could finish it. great characters and couldn't wait to listen to more of the story. Had me involved. Narration much much better than previous Dekker book which I returned because of it.

Really enjoy getting to know the characters in this series. Narrator is excellent. Twists and turns throughout the story, very enjoyable

this was well worth listening to. i enjoyed every moment of it. Thanks to all involved in the production of it.