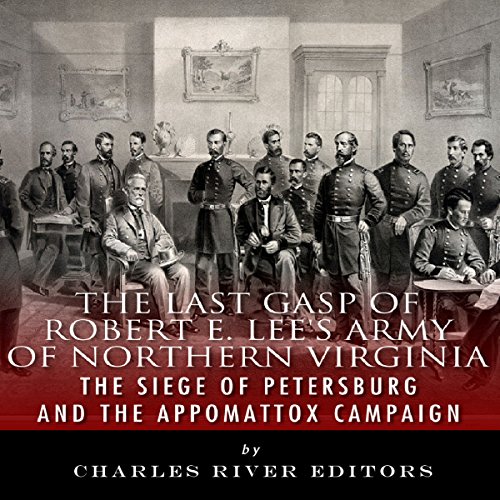 The Siege of Petersburg and the Appomattox Campaign
By: Charles River Editors
Narrated by: Keith Peters
Length: 3 hrs and 48 mins
Categories: History, American
4.5 out of 5 stars 4.3 (3 ratings)

"I have seen your despatch expressing your unwillingness to break your hold where you are. Neither am I willing. Hold on with a bulldog grip, and chew and choke as much as possible." (President Abraham Lincoln to Ulysses S. Grant, August 1864)

After the last major pitched battle of the Overland Campaign was fought at Cold Harbor in early June, Ulysses S. Grant's Army of the Potomac had suffered more casualties during the campaign than Robert E. Lee had in his entire Army of Northern Virginia at the start of May. Understandably, the American public was shocked by the carnage. To this day Grant has been accused of being a butcher, but attrition had become a vital war aim for the North and Grant remained undeterred.

Refusing to attack Lee in frontal assaults, and aware that Lee dared not venture out to counterattack, Grant nearly captured Richmond in mid-June by stealing a march on Lee's army and crossing the James River. The fog of war, poor luck, and a skillful, impromptu defense by P.G.T. Beauregard stopped Grant from taking Petersburg, which was a critical railroad hub and supply line for Richmond, before Lee's army could confront, thereby saving the Confederacy for the time being.

The two armies began to dig in around Petersburg. Unbeknownst to them, they would be there for the next 9 months, constructing elaborate trenches and engaging in the kind of warfare that would be the forerunner of World War I. Both sides engaged in innovative and unique attempts at mining underneath the enemy's siege lines, as well as countermining. This led to the famous Battle of the Crater, which turned an ingenious engineering feat into a Union debacle.