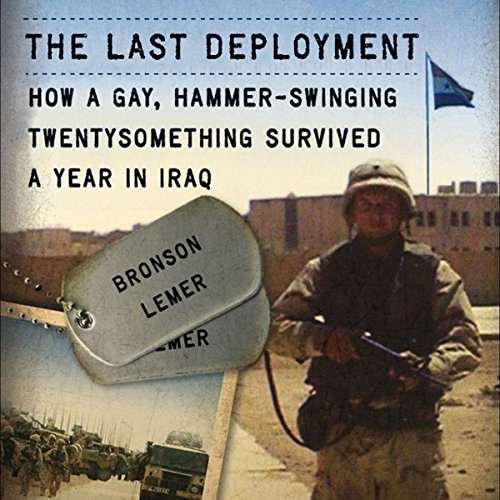 The Last Deployment: How a Gay, Hammer-Swinging Twentysomething Survived a Year in Iraq

By: Bronson Lemer
Narrated by: Kevin Pierce
Try for $0.00

In 2003, after serving five and a half years as a carpenter in a North Dakota National Guard engineer unit, Bronson Lemer was ready to leave the military behind. But six months short of completing his commitment to the army, Lemer was deployed on a yearlong tour of duty to Iraq. Leaving college life behind in the Midwest, he yearns for a lost love and quietly dreams of a future as an openly gay man outside the military. He discovers that his father's lifelong example of silent strength has taught him much about being a man, and these lessons help him survive in a war zone and to conceal his sexuality, as he is required to do by the U.S. military.

The Last Deployment is a moving, provocative chronicle of one soldier's struggle to reconcile military brotherhood with self-acceptance. Lemer captures the absurd nuances of a soldier's daily life: growing a mustache to disguise his fear, wearing pantyhose to battle sand fleas, and exchanging barbs with Iraqis while driving through Baghdad. But most strikingly, he describes the poignant reality faced by gay servicemen and servicewomen, who must mask their identities while serving a country that disowns them. Often funny, sometimes anguished, The Last Deployment paints a deeply personal portrait of war in the 21st century.

“Lemer's is a wonderfully descriptive, wryly humorous, heart-crushing story, and I couldn't put it down. . . . If you love a soldier, your country, or both, The Last Deployment is a book you'll want to tell everybody about.” ( The Dallas Voice)
“This book provides a poignant example of a gay man learning more about his place in the world. Lemer's fears and joys highlight the humanity associated with being gay in the military, along with complexities of the discriminatory and soon to be ended policy of ‘Don't Ask, Don't Tell.'” ( High Plains Reader)

What listeners say about The Last Deployment: How a Gay, Hammer-Swinging Twentysomething Survived a Year in Iraq

I wasn't expecting an amazing story and it wasn't. But it was well written and the longer I listened to it the more I looked forward to when I could pick it up again. I'm a gay vet and what I found was very similar experience and thoughts/feelings/circumstance despite that I was an officer in non-combat duty whereas the author was enlisted in combat duty. The narrative would appeal to anyone - it's not all about the gay, it's more about an average soldiers daily experience in the military, with a deployment to Iraq, and by the way he's gay which add's another dimension. The narrator is very good - it might have been better with a younger narrator for the effect, but that was a minor distraction. I'm generally not interested in contemporary war tales (too soon) but I liked the non-rambo style in which this story was told.

The narrator did not match the author's writing style. The writing and voice of the 28-year-old author did not match the narrator's much older, reserved style of communication. I felt like my Dad was reading me the story. This book feels like a documentary so using the actual voice of the author would have helped convey the story. This book would have been better if the author read his own book.