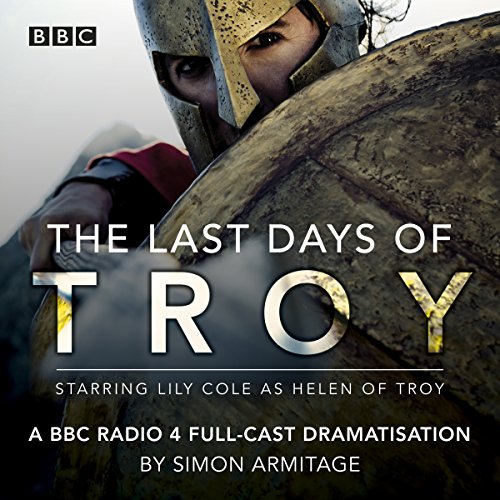 The Last Days of Troy

Lily Cole stars as Helen of Troy, ‘the face that launched a thousand ships’, in Simon Armitage’s vivid, visceral adaptation of Homer’s Iliad and Virgil’s Aeneid.

For 10 years, the Greeks have been laying siege to Troy to win back their abducted queen, Helen. But as the war drags on and the battlefields run scarlet with blood, the opposing forces are entrenched in a bitter stalemate. As gods and mortals squabble amongst themselves for the spoils of war, the exhausted warriors go to extreme lengths in a desperate grab for victory....

Dramatised by multiaward-winning poet and playwright Simon Armitage, The Last Days of Troy was first produced as a stage play at the Manchester Royal Exchange and Shakespeare’s Globe, and this radio version features the original cast. Both a tense action adventure and a powerful commentary on the futility of war, it brings Homer’s ancient myth to dynamic life and explores themes that still resonate today, in a world locked in cycles of conflict and revenge, East versus West and with the same dangerous combination of pride, lies and self-deception that fuelled the Trojan War.

"Armitage was the real star, with his vivid and muscular dialogue and occasional flashes of humour...The Last Days of Troy was a powerful reflection on the folly of men and the cruelty of war." (Independent)

What listeners say about The Last Days of Troy

BBC audio at its best

Although the play was originally at the National Theatre, the BBC sound department have added an excellent sound effects, giving the text added depth. On this basis, I would welcome more collaborations between the NT and BBC. Excellent.

one of the best plays I was given to see

I bought the audio book after being lucky enough to see the play at the Globe a fee years back. it was quite an amazing experience and I was am more than happy to relive it with the same actors . kudo to them for bringing this magnificent story to life ,thanks as well to the lively storytelling by Simon Armitage.