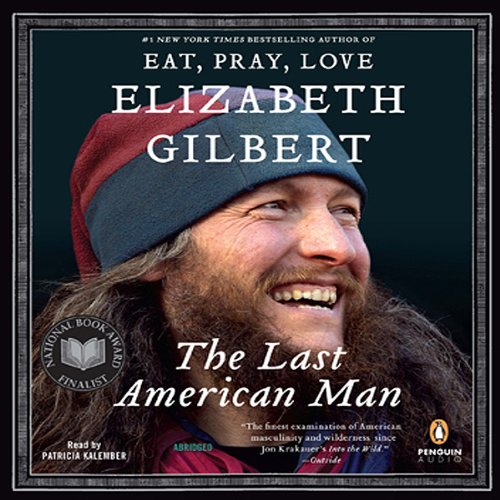 By: Elizabeth Gilbert
Narrated by: Patricia Kalember
Try for $0.00

In this rousing examination of contemporary American male identity, acclaimed author and journalist Elizabeth Gilbert explores the fascinating true story of Eustace Conway. In 1977, at the age of 17, Conway left his family's comfortable suburban home to move to the Appalachian Mountains. For more than two decades he has lived there, making fire with sticks, wearing skins from animals he trapped, and trying to convince Americans to give up their materialistic lifestyles and return with him back to nature.

To Gilbert, Conway's mythical character challenges all our assumptions about what it is to be a modern man in America; he is a symbol of much we feel about how our men should be, but rarely are.

"The finest examination of American masculinity and wilderness since Jon Krakauer's Into the Wild." (Outside)

"Wickedly well-written...Without compromising her obvious admiration, Ms. Gilbert presents a warts-and-all portrait of Mr. Conway and a sophisticated understanding of why those warts are only natural.... A vigorous, engaging book." (The New York Times Book Review)

What listeners say about The Last American Man

Glad to Get to Know my Neighbor

I haven't read anything else by Elizabeth Gilbert, but she made a great first impression here. I live in Boone, North Carolina, and my land sits just above Eustace Conway's place. Though I'd heard about him, I'd never met him. I bought this book because he drove up on his motorcycle the other day and struck up a conversation with me. He's intriguing, really present, curious, and unassuming. The last was the only thing that remained surprising after reading the book, and it was only a half hour conversation, so I wouldn't profess to know him.

He wanted to see my chickens, I offered him a fig tree in the spring, and we talked about asparagus. We also talked about solar heating, a green house I built, and he offered to show me how to do some blacksmithing, which I'll gladly take him up on. The whole encounter made me really think about modern interactions, or our lack thereof. Nobody's ever just walked up to my house, introduced themselves, and started a pleasant conversation with me. A sane person, who wasn't selling something. It's never happened to me before, and it got me thinking about how isolated we've become.

I'd never thought about it, but when I was younger, I recall talking with strangers more. In a waiting room, a line, on a subway or plane . . . . Now, I'm generally listening to a book or something in my own personal bubble. I like that time, don't get me wrong, but it's a major shift in how we interact with others I hadn't really noticed. Private in public space--kind of shutting other people out. I don't even welcome most interactions with strangers anymore, as I have better ways to pass the time on my phone. But I wonder if I'm getting lazy. Missing out on experiences like this one.

I had no idea about the fascinating things he's done in his life, only that he's a well-known guy in the area, and that he owns and runs the Turtle Island Preserve. Obviously, the book was even more interesting having just met him, and knowing the places and many of the people discussed in the book, but I think I would have found it just as interesting had this not been the case.

He's had some extraordinary adventures and his many accomplishments are something beyond impressive, but what I really liked most about this book was the treatment of his faults and issues, and his painful relationship with his dad. Gilbert clearly knows him and his family personally, and her insights into the complexities of his family relationships, and their impact on who he's become, seemed really sapient without over-reaching or descending into psycho-babble.

In this book, he emerges as a very complex, smart man, who is likely a *!#@! to be around due to his instintingly high standards for himself and others. He doesn't suffer fools well, and he's smart enough that he's likely surrounded by people less intelligent than he is, even where they are plenty smart. I think that's hard for really smart people sometimes, and some don't handle it very well. Given the dad he was dealt, it wasn't really surprising to me that he can be less than a joy to work around in a situation where he has something he wants to accomplish.

It's an inspiring and sad story, all at once. Gilbert does a good job of painting a picture in which he's isolated by people's fascination with his persona and lifestyle, as well as by his own shortcomings. I was awed by his accomplishments myself, and couldn't help but wonder how our interaction might have changed had I known all of this beforehand. I'd like to think it would have been the same, but I doubt it.

The narration is great--very engaging and natural--and the story is well-worth the credit. If you like books like "A Walk in the Woods" or biographies of fascinating people, generally, you'll probably binge on this.

This is a great book and a very interesting story. However, the narrator ruins it with her poor attempt at a southern accent.

This isn't Gone with the Wind. She should have just read the book

I can only imagine how awesome this story would have been if the author would have been the narrator. The performance was awful, the accents...
made you feel embarrassed for the narrator. The story was awesome, Liz really explores this man and his personality. She is such an amazing author. She starts by introducing Eustes Conway as a larger than life persona but then peels away layers and layers until the reader at the end of the book feel they really know this person. Marvellous memoir, pity on the perdormance.

Patricia Kalember's voice and style seemed all wrong for the book. I almost returned the audio version and to try to find a printed copy instead. If the main character is a manly mountain man, the reader should be able to a voice that doesn't sound like a southern woman. I kept expecting him to say, "I don't know nothin' about birthing no babies" in a hysterical Gone with the Wind voice. The reader's voice actually went higher when she was speaking in Conway's voice. Elizabeth Gilbert's voice would have been lovely.

This is the story of an a**hole who thinks he is the savior of man kind and actually has compared himself to god. He is an admitted "faker" who puts on a show. Not one person can stand to be around him, and some how he thinks its everyone else who needs to change. This is a grown man who ran away to the woods and still has daddy issues.

It’s an interesting story. Eustace Conway was at the time the book was written, and still is today, a remarkable human being and Elizabeth Gilbert told his story well- the good, bad and the ugly. I definitely will echo the other reviewers on how bad the narration is however... It literally made me cringe the entire time I was listening and I almost couldn’t finish the book because of it. She uses this weird Foghorn Leghorn-type of inflection, basically the type of accent Yankees use to make fun of Southerners. I was born in New York and now live in North Carolina so I do know something about this; in any case I’ve never heard anyone in the Carolinas, or anywhere else in the South, talk like that! In summary, the book is definitely worth reading but you might want to try the print or Kindle version if possible.

Early work of Liz Gilbert. After reading this book I knew I would want to read all her books.
Remarkable and fascinating true story of a real original.

Disappointing, especially from such a good author

I'm not really sure what I was expecting, but maybe some general direction and purpose would have been a good start. While the story of this guy was initially interesting, the book didn't really go anywhere. The author drifts in a few directions, but in the end, I don't really like the person she's writing about. He's self-centered, not willing to learn about the social environment around him, and he's pretty sure everyone else is messed up. And hey, I'm not going to disagree that our society couldn't use some more strong spirited, independent, bold men, but not like this arrogant douche. No thanks.

There's so many better books out there about great men. Maybe pick up something like The Big Burn or something with Teddy Roosevelt. Those are characters worthy of respect.

Met Eustace this past weekend...

I spent some precious time with Eustace this past weekend at Turtle Island....I know my life will never be the same as it was the minute before I drove down in that holler...finished the book while mowing on my tractor today...things look different to me now. Joshua Draper Stoney Ridge Farmer

The Man, the Legend

Read this book while preparing students for a trip to Turtle Island, Eustace Conway's preserve in NC. I totally enjoyed Elizabeth Gilbert's writing style, and gained tremendously from this understanding of Eustace. I have read reviews that discredit Ms. Gilbert's over-involvement with her subject; my take on this is that authors have been writing about people they know "too well" for years. It's a legitimate way to write, and it's the reader's job to decide just what bias this may give the author's story. this story is very well worth telling!