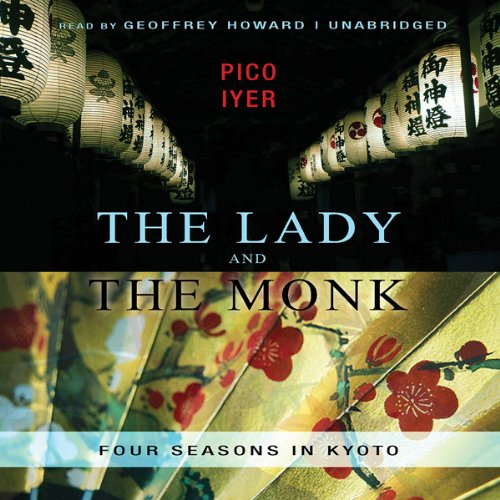 The Lady and the Monk

By: Pico Iyer
Narrated by: Geoffrey Howard
Try for $0.00

When Pico Iyer decided to go to Kyoto and live in a monastery, he did so to learn about Zen Buddhism from the inside, to get to know Kyoto, one of the loveliest old cities in the world, and to find out something about Japanese culture today—not the world of businessmen and production lines, but the traditional world of changing seasons and the silence of temples, of the images woven through literature, of the lunar Japan that still lives on behind the rising sun of geopolitical power.

All this he did. And then he met Sachiko.

Vivacious, attractive, thoroughly educated, speaking English enthusiastically if eccentrically, the wife of a Japanese “salaryman” who seldom left the office before 10 PM, Sachiko was as conversant with tea ceremony and classical Japanese literature as with rock music, Goethe, and Vivaldi. With the lightness of touch that made Video Night in Kathmandu so captivating, Pico Iyer fashions from their relationship a marvelously ironic yet heartfelt book that is at once a portrait of cross-cultural infatuation—and misunderstanding—and a delightfully fresh way of seeing both the old Japan and the very new.

“A beautifully written book about someone looking for ancient dreams in a strange modern place.” ( Los Angeles Times Book Review)

What listeners say about The Lady and the Monk

Excursion to Kyoto and Japanese way of life

Wonderful that the book is from the era before smartphones. The author is observing the feminine world of Kyoto, zen temples, family life, dreams and attitudes of the locals and the foreigners. Loaded with the feel of the place, not the facts of history.

This book started off really strong for me. I thought I was going to love it. Then by the middle it took a turn. It drifted in story. It literally started not making sense. By the end of the story I literally had no idea what was happening. Do not get me wrong, the writing is beautiful in fact quite lyrical. It just got lost in the magic for me.

A book unlike anything I have ever read before.
I was hesitant to get the book, but since it is “included”, you can’t go wrong.
So glad I did.
I have read several books about Japan. This book is very different.
I recommend an interesting article about the author mr. Pico Iyer
on Wikipedia.
The narrator Geoffrey Howard did an excellent job.
My thanks to all involved, JK