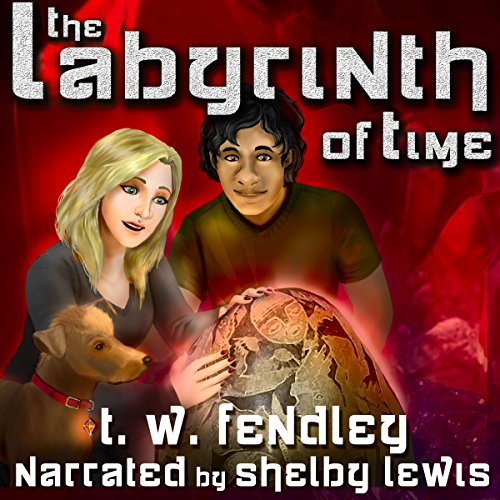 The Labyrinth of Time

The Labyrinth of Time

Spending spring break in Peru with her grandmother isn't sixteen-year-old Jade's idea of fun. She'd much rather be with her friends at Lake of the Ozarks. Then she meets Felix, a museum director's son. Jade discovers only she and Felix can telepathically access messages left on engraved stones in the age of dinosaurs.

Following the ancient stones' guidance, they enter the Labyrinth of Time and - with a shapeshifting dog's help - seek a red crystal called the Firestone. But time is running out before the First Men return on the night of the second blue moon.

Can Jade restore the Firestone's powers before the First Men return to judge humanity?

Would you listen to The Labyrinth of Time again? Why?

I absolutely loved this book! I would read it again. To be honest, I never listen to audiobooks but it caught my attention right away. Having an interest in rocks and geology myself (as well as labyrinths) I was immediately attuned and listening to the story.

I liked that the author was unique in her writing. I have never read a young adult novel quite like this one, and I am a Librarian! It would seem like the author has some education/background in geology or rock sorting.

Have you listened to any of Shelby Lewis’s other performances before? How does this one compare?

I have never listened to Shelby Lewis's other performances because this was my first. I would listen to her in the future though.

don’t let the cover deter you

The Labyrinth of Time by T.W. Fendley. Narrated/Performed by Shelby Lewis. This unabridged audio is 6 hours and 34 minutes long. Genre: Fantasy and Magic. Young Adult.

A young 16 year old, Jade finds herself going on Spring break to Peru with her grandmother. She is not at all excited about this trip. What possibly could they do that her grandmother would be able to handle. Sight seeing at museums. Well, it turns out the one museum they do go in is where she meets Felix.

Felix, the son of the museum director. He is immediately drawn to her as she is with him. They find that they have something in common. Strange and mysterious powers. Powers that send them to another dimension. Jade is the one person that needs to help restore the power of the Firestone. Can Jade do it in time before the world ends during the Blue Moon. What does a dog that has been following them through out the Labyrinth of Time have to do with all this? How will he help them discover the red stone. What was engraved on the Age of the Dinosaur stone? What does it mean? How will this help Jade restore the Firestone’s powers.

The author T.W. Fendley created an amazing tale that takes you as the listener to another time. The prologue of the book is very important part that all comes full circle in the end of the book. Every part of the book was well thought and planned out. Did not have me as a listener wondering what was going on or wondering why something happened and the reason for it. The flow of the story was very well written. It kept me wanting to know what was going to happen next.

The choice of the narrator that performed the book Shelby Lewis did an amazing job with the flow of the story. However, there was no voice changes like some stories. A bit but, that was fine. I liked the way she read and performed the entire story. You knew when it was Jade speaking or the other female characters. The male parts where just read thru. She kept up the action in her voice and when there was a bit of romance between Jade and Felix you can feel it in her voice. Great Job in my opinion.

Now, the cover that left a bit to be desired. It was alright. However, if I was looking for a young adult fantasy to listen to. I would have passed it up because of the art work of the cover. It would not have drawn me in. Believe it or not, that is one of the first deciding factors for me to continue on to the synopsis of the book. I past this up for reviewing merely for the fact of the cover. Asked if I would review it, I agreed and was quite surprised how great this story ended up. I feel that a rework of the cover is needed to bring in more listeners and readers. I feel a tightening up on the cover design and definitely a different font.

So don’t let the cover deter you from the listen. Get the book and enjoy a wonderful story. I will be looking forward to other books by this author in the future.