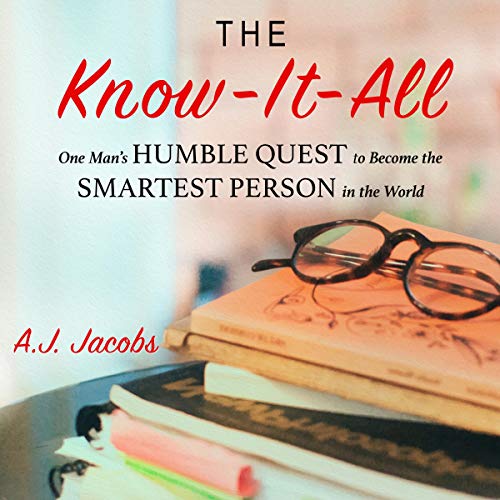 Early in his career, A.J. Jacobs put his Ivy League education to work at Entertainment Weekly. He emerged five years later knowing which stars have fake boobs, which stars have toupees, which have both, and not much else. This realization led Jacobs on a life-changing quest: to read the entire contents of the Encyclopaedia Britannica, all 33,000 pages, all 44 million words.

The mission began in October 2002, with the word "a-ak". The word launches hilarious misadventures through 32 volumes, as Jacobs accumulates useful and less-so knowledge, and along the way finds a deep connection with his father, examines the nature of knowledge vs. intelligence, and learns how to be rather annoying at cocktail parties.

The Know-It-All is an ingenious, mightily entertaining memoir of one man's intellect, neuroses, and obsessions, and a soul-searching, ultimately touching struggle between the obsessive quest for factual knowledge and the undeniable gift of hard-won wisdom.

"One of the book's strongest parts is its laugh-out-loud humor." (Publishers Weekly)
"Sidesplitting." (Time Out New York)

What listeners say about The Know-It-All

When I first heard about this book,I was mildly interested at the thought of someone reading through the Encyclopedia Britannica from A-Z (being what Jacobs calls an "encyclopedia dabbler" myself), but feared it would just be a pretentious rehash of what he'd read.

Then, a friend told me how much she'd enjoyed and laughed witt another of Jacobs' books, The Year of Living Biblically. Realizing then that The Know It All would be humorous and informative, I decided I had to listen to it.

What a pleasure! True, the narrator has a nasal voice but as you get into the book, you realize this and his delivery are perfectly fitted for the book.

I learned some facts -- but mostly enjoyed his humor and attitude toward life and learning.

In fact, this is one of the best books I've listened to here at Audible.

What were they thinking?

I'm beginning to wonder about the usefulness of some of these reviews, particularly the negative ones. They almost prevented me from listening to Blink by Malcom Gladwell which I LOVED and might have prevailed against me for this one had I paid any attention. They are in such stark contrast to my experience.

I find this book a very enjoyable read and as people have said, it's as much about the author as the book he is reading. I have truly enjoyed the narrator Geoffrey Cantor portrayal of the book. He seems more like an actor reading a script than a narrator reading a book.

The book is long however, but I think I'll be able to stop it for awhile and come back to it fairly easily. I strongly recommend it.

I was skeptical about this book after reading a few bad reviews. I'm currently enjoying listening to this book. I'm glad I decided to ignore the bad reviews or I would have missed out on an entertaining book.

Within the first minutes of The Know-It-All, I was laughing out loud, and probably looking like an idiot to the drivers of the cars around me. AJ Jacobs' quest for knowledge may be contrived for the purposes of writing a book, but so what? Bill Bryson's journeys are undertaken with the same goal in mind, after all.

In fact, a Bryson travel book is the closest comparison I can think of to The Know-It-All, and that's high praise. Expecting to get a condensed version of the encyclopaedia is ridiculous - this book is about READING the encyclopaedia, not just abridging the interesting facts. Yes, of course he's somewhat self-obsessed - but that's kind of the point: he's writing a book about a personal endeavour, and he's populating it with anecdotes about himself and characters in his life. Personally, I enjoyed the descriptions of his relationships with his father and his brother-in-law, and I thought the tone of his humour was perfectly pitched.

The Know-It-All isn't meant to be taken seriously, so people who are expecting it to distill all of human knowledge into a handy bite-sized chunk are going to be disappointed. Me? I thought it's the best Audible book I've listened to in a long time.

Fun, and even informative

This is an ideal audio book...perfect for short trips, and enjoyable for the whole family. It may not replace reading the entire Encyclopedia Britannica for yourself (and who really wants to?), but the variety and humorous commentary is well worth the price of admission.

I started listening to it on the bus, but had to give it up because people kept looking at me like I was a lunatic when I would burst into uncontrollable laughter. Jacobs is laugh out loud funny, which I expected, but he was also sometimes touching, which I didn't. Most of the book looks at the absurdity of the world, intellectualism, and Jacobs himself, but in some of it, he makes serious observations about the human condition. I feel a little wiser and a lot happier having read it.

If trivial information and "I did not know that", make you smile your going to love this book. I have always looked at the encyclopaedia with awe and fear but this book makes it fun to delve into those obscure facts that enlighten and surprise.

Although there are lots of obscure and interesting snippets from the encyclopaedia, this book is really an engaging autobiography. Jacobs' style is conversational and liberally sprinkled with humor. If he had read the book himself, he could not have done it better than Geoffrey Cantor did ... which is probably why Cantor did it.
The sessions I spent listening to The Know-It-All came to seem like personal conversations with a close friend. Now that I've reached the end, I'm going to miss you, A. J. Come back soon.

After reading all the negative reviews, I have to weigh in in favor of this book. This book is more introspection on the life of Jacobs than an academic discussion of the encyclopedia (thankfully). Jacobs is not beyond poking fun at himself while he examines his own life in an uninhibited way. I thought the narration was great -- the occasional mispronunciations didn't bother me. Cantor's great accents more than made up for them.

My normal "reads" are crime and covert-ops espionage so the occasional side venture to humor are always welcomed. The narrator here even sounds like David Sedaris who I always felt is a long lost son of Woody Allen.

Great travel choice with the family. Maybe a few hours longer than necessary but easy to leave and come back to without having to recall any plot lines or characters..... there is no plot or characters.

It could just be my fascination with big books and hunger for knowledge, but this would make a great tv show or, at least, a movie 😃

Had this as our 'bedtime story' learnt some good snippets of information (wish we could remember all of it!) It was funny, interesting and very well told. You can pick this up, listen to a bit and pick up where you left off.
A really enjoyable listen, thankyou.