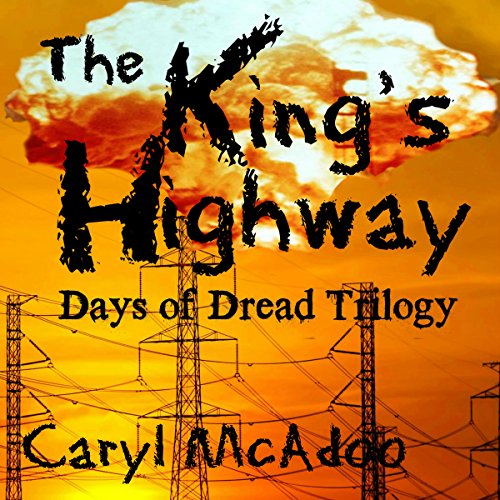 With airplanes falling out of the sky and all things electric rendered useless after a mysterious flash, skills instilled by Jackson's marine father move front and center. With a fierce determination to keep his 13-year-old sister, McKenzie, and nine-year-old brother, Cooper, safe, the high school freshman is compelled to leave their Irving home in the shadow of the DFW airport. Thrust into a lawless, chaotic world, he's guided by an ever-changing cryptic note that leads his growing troupe along the King's Highway in search of their grandparents. Bullies, Russians, wild animals, gangbangers, and kidnappers thwart their progress while a lack of drinkable water and food is a constant concern. Will he ever find a safe place?

What listeners say about The King's Highway

What in the world happened...

What a interesting book. I could not put it down. Is this the world’s future? Are we prepared for a happening like this? Can this happen? Caryl McAdoo gets us thinking about the end of the age. Are we in the end times? Is this what it will be like? Enjoy this book as it gets you thinking about what in the world happened?

I really, really liked this book. It was such a thought-provoking book, fun at times, scary at times... however, it truly shows how the Lord protects us and how we entertain angels unaware. Sibling love shines through this story as does the love of others. If you read this, you will not be disappointed. I received a free audio copy of this book from the author and I am voluntarily leaving this review.

A different kind of dystopian .

The King's Highway
Days of Dread, Volume 1
By: Caryl McAdoo

The author takes us into a Christian dystopian world. Three siblings must

leave their unsafe home and journey to their grandparents home. They meet

many people on the journey, both good and evil. They are guided by a dog

that helps their faith to grow.

This is a good first book. I can only guess where the rest of the story


The narration was well done. The characters were well portrayed by John

R Bedingfield Jr. There was a bit of tinny sound to the recording, but I