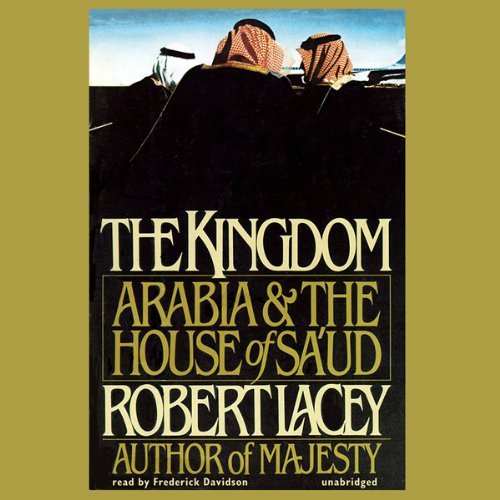 By: Robert Lacey
Narrated by: Frederick Davidson
Try for $0.00

The Kingdom is the story of a country - a country of astonishing contrasts, where routine computer printouts open with the words “In the name of God,” where men who grew up in goat-hair tents now dominate the money markets of the world, and where murderers and adulterers are publicly executed in the street. By its own reckoning, this country is just entering the 15th century.

The Kingdom is also the story of a family - a family that has fought its way from poverty and obscurity into wealth and power the likes of which the world has never known, a family characterized by fierce loyalty among its members, ruthlessness toward its enemies, and dedication to one of the world’s most severe and demanding creeds.

The Kingdom is Saudi Arabia - the only country in the world to bear the name of the family that rules it.

“In Saudi Arabia, Robert Lacey had the kind of access most journalists only dream of.” (David Brancaccio)
“Frederick Davidson’s well-paced, crisp, and forthright reading commands the listener’s attention.” ( AudioFile)
“[Lacey’s] grasp of Saudi thinking and purposes is most intensely felt in the final, 1973-and-after, section—where he is able to make sympathetically intelligible, even inescapable, everything from the oil boycott to the Saudis’ nonconservation of their one valuable resource, from their tolerance of internal dissidence to their outrage at the TV-film Death of a Princess.” ( Kirkus Reviews)

What listeners say about The Kingdom

Learn the history of Al Saud in an enjoyable way!

For a long time, I was really very curious about what Saudi Arabia *was*, exactly. As a Jewish Zionist woman in America, I knew that the Arabs were the people in Lebanon who shot guns into the air (or maybe at less of a right angle to the ground) whose bullets ended up in the kibbutz where the family that were, for all intents and purposes, my cousins, were picking oranges, or sitting on the back patio practicing guitar. occasionally, a bullet would hit a kibbutznik. It was the way things were.

The Arabs were also the women in hijabs and chadors who protested the Operation Exodus rally my parents, siblings, and I attended. Their fury, their "YOU ARE KILLING OUR BABIES! YOU ARE SLAUGHTERING OUR CHILDREN!" was accompanied by their beating the sides of our buses with their picket signs until the dowels which held up the tag board shattered, the splinters flying back to catch on the insides and hems of their hijabs and chadors.
It was the first time in my life I had seen grown people having temper tantrums. It was also the first time I ever heard grown-up ladies screeching and spitting lies at the top of their lungs, right in front of their stunned children.

The Arabs were why my mother couldn't, as a Jewish woman, get some of the best corporate law jobs in Dallas, when my father was paying back some of his Berry Plan time in San Antonio and Dallas: A plurality of the best jobs were with petroleum companies, and, back then, petroleum companies did not hire Jews.

So Mom worked for Schilling Tool and Die, which made drilling equipment. She went to, and made excellent grades at, UCLA Law at a time when there were still professors who made open announcements that they thought that women had no right to enter the professions and take "men's jobs." She did excellently on the Bar Exam. But the Arabs couldn't deal with finding a Jew working for an oil company. So Mom wasn't even considered for a job at one.

This book let me think positively about Arabs -- about Al Saud, even! -- for the length of time necessary to my absorption of the history and facts of just who this ibn Saud family were, anyway, and how they ended up following the radical Muslim sect of a poor Bedouin among poor Bedouins (ibn Wahhab, who gave birth to Wahhabism).

It (along with Robert Irwin's biography of Ibn Khaldun, which is also available on Audible) showed me how closely Frank Herbert's Dune cycle of novels was based upon the Saudis, who are the basis for the Atreides family.

It introduced me to the beautiful but misunderstood and/or doomed female-empowerment-supporting queens and princesses of the family, such as Iffat Al-Thunayan, and the imprisoned daughters of Abdullah (who was king directly before the current king (they're all in the same family, which is practically a nation unto itself), whom I read about because Abdullah was the last king mentioned in this audiobook, which was recorded in 1997, a year after Abdullah inherited the throne: There was a set of articles about his imprisonment of his daughters by the striking and modern Alanoud Al-Fayez.

The book makes clear that the Khashoggi family was just barely tolerated by the ibn Sauds. The recently-slain journalist, Jamal Khashoggi's, uncle, Adnan, was the first Saudi famous for living like a European while on vacation. He loosened the rings of the collective Saudi kaffiyeh, such that some of the many other princes and potentates also bought yachts and let their wives and daughters go around in bluejeans and tee-shirts -- or even bikinis -- while not in their home country. As Lacey puts it, he showed them "that spending their petrodollars could actually be fun."

He also included some telling details about Harold Philby, Sr, who was Kim Philby's father. The apple and the tree are practically twins, spiritually and ethically speaking.

This book almost made me feel sorry for these bizarre, oddly-scrupled princes in golden cages.

Then I remember what the first Al Saud's imam friend did to the Lebanese on the border, and the women outside the rally. And how Hamas isn't a terrorist organization to them. And how running off with your lover gets even a princess a summary execution in the public execution alley. And how my mother was denied certain jobs in order that these princes' feelings not be hurt; in order that the tripwires of their paranoid conspiracy theories not be triggered and set off economic or martial disaster.

This book humanizes them. But the fact that they are not dybbuks, or demons, or djinni? That makes their willful ignorance somehow exponentially worse.

Having a Tough Time Cutting Through Orientalism

Lacey's work is something I reference a great deal when I'm looking for research on Saudi Arabia, but most of what I had previously engaged with was his newer work. This book is a good summary and, like all of his stuff, is well-written, but it also has a pretty strong undercurrent of British colonial Orientalism and a feeling of racial disdain (see the sections dealing with Bedouin custom). Many people would push back on this, but there is a lot of other scholarship from the time that views the Arabs as actors and full humans in their own right (see Malcolm Kerr's The Arab Cold War) and I don't believe this book does that. It doesn't help that the voice actor sounds like a bond villain.

Writing this review is very hard. I lived in Saudi Arabia for 10 years and was eager to read the sections on Abdual Aziaz early conquest of the kingdom and the dealings with I'quan, especially since the later topic was almost a taboo topic among the generation of Saudis old enough to remember them The book also does a good job at explaining the pivital role played the late king Fisal, love him or hate him he is critical to any history of the kingdom.

The problems with the book are two fold.the first is with the text, it almost too detailed. the names often run together even though I knew the major players I found myself rewinding and having trouble keeping track of who was being talked about. the second problem is the narration Fredrick Davidson reads in a dry laconic style which with a book this long it can become dull to listen for long periods.

I still remember the well-aged professor who made this book a part of our required reading. I enjoyed the knowledge that I gained twenty-some years ago and glad that I found it as an audio book this time around. With the world news reeling from the developments in Afghanistan, I found this book even more timely. It should be a required reading. If nothing else, it can help us find respect for each other, other faiths, and our own personal beliefs.

Was an interesting book, but at times the recording quality was poor. Overall, still worth listening to if you’re interested in learning about Saudi Arabia.

A 'bible' for understanding Saudi Arabia

What made the experience of listening to The Kingdom the most enjoyable?

The historical details. The stories that illuminated the culture and mores of a people who care deeply about their traditions. And the scope. The scope of material is impressive.

What other book might you compare The Kingdom to and why?

Any thing else by Lacey. His research is thorough and yet he retains a detached respect for his subject.

The accent and the characters he conveys throughout the book. He does a great job at capturing a voice of a given character in the book and brings the stories alive.

No such reaction. My response was one of appreciation for the breadth and depth of research on the part of the author.