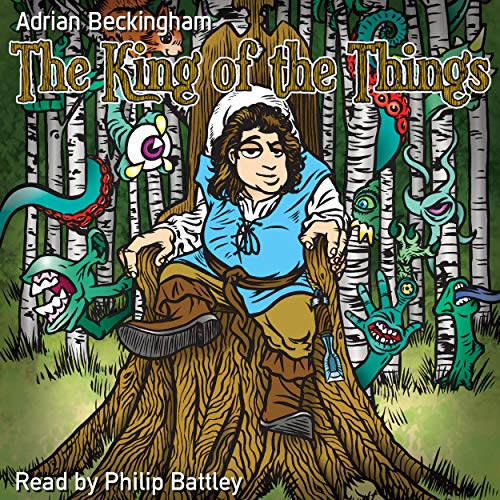 The King of the Things

By: Adrian Beckingham
Narrated by: Philip Battley
Try for $0.00

This story is an adult free zone. Why? Because it is simply too scary, or too horridly disgusting, for most adults. We know this is true. Kids can handle it. Usually. Adults can’t. Mostly. There are very few grown who can sit through the full telling of this tale. Not without scrunching up their noses, or scrinching up their eyes, or gasping “EEEwwwww” or just saying “Yuk that’s disgusting” before the tale reaches its end. Very brave grown-ups may be allowed to listen, if at least one child will vouch that they can handle it. So now you know that, we can carry on...

This is a folk tale for children, set once upon a time, in a place not so far from you.

Meet the schoolboy Hunch - the village hunchback. Hunch lives in a small village surrounded by a tall forest. All the parents always tell the children, "Don't go in the woods!" When the children ask why, the adults always say, "Because strange creatures called Things live in there! We don't know what they look like, but we do know that anyone who enters that forest, never comes back"!

Would YOU enter the forest if you'd been told that?

Nobody ever dares go in the woods, because of the strange Things that live there.

But Hunch the village hunchback is different from everyone else. He knows it. Everyone knows it. And his arch-rival at school - a boy named Tax who is best at absolutely everything - never fails to use it against him. Tax is Hunch's very own bully - you could say that Tax is 'King Of The Thugs' and makes sure Hunch remains miserable.

Then one full moon after being bullied by Tax, Hunch gets so upset he runs into the forest. He can't help himself. He's not thinking - he's just got one voice in his head. It is saying "Oh why was I born me?" and blinds out all thoughts about his own safety.

In this story where goodness receives its own reward, nobody expects the surprise at hand when Hunch meets the Things. He will never be the same - if only he can survive, and remember to say thank you!

What listeners say about The King of the Things

Bullying & Mysteries in the Woods

The King of the Things is a cute little story about bullying and how to deal with it, set in a quiet little village pre-modern times with swinging axes and snuggly squirrels. Hunch is a sensitive young lad with zero friends and limited math skills. However, he does make friends with woodland creatures easily and his parents love him. The other kids and adults either make fun of him or avoid him because he looks different from them, with that big hunchback on one shoulder. Tax is the main insulter, a boy who has too many natural skills and little ambition to become a better person.

But things are about to get weird for Hunch. One day after yet another humiliating event in the village, he run-shambles out far and farther into the woods. There he comes across something he wasn’t expecting and had never seen before. Unexpectedly, even though it’s scary, Hunch may have just made an ally.

My one little quibble is that the cast of characters is so limited and they are all male (tho Hunch’s mom gets a mention). I hope that changes as the story continues in a second book (right? You can’t just leave me with a cliffhanger!). There has to be more to Hunch’s story, right? I mean things definitely look up and left-tilted near the end for Hunch, being strange and new territory for him, but what happens next? Overall, 4.5/5 stars.

The Narration: Philip Battley was a good voice for the story. He sounded like a kindly uncle reading a bedtime story. He didn’t do kids voices really for the two young lads but you could always tell which character was talking as Hunch sounded more sensitive and Tax more insulting even if he was just breathing. The pacing was good and there were no tech issues with the recording. 4.5/5 stars.

My kids loved this story as a perfect companion on our long drive to visit family. Its all they could talk about. We definitely thank author Adrian Beckingham for not only keeping them occupied, but pumping so much enthusiasm into them. This is the power of a true master of storytelling.

I thought I'd give this a go based on the blurb and was glad I did as it is a very good but strange book, which I thoroughly enjoyed. the book follows a boy called Hunch who gets.constantly bullied by another boy who makes him build furniture to be sold at a massive feast. when Hunch is not invited he runs into the forbidden forest and meets the king of things, a shape shifting thing. from then on things turn really strange

My younger kids loved this story, they heard the author tell it in their school once and its made a hugely positive impact on them ever since.

Totally tantalising tale of triumph with marvellous wordplay. Thank you so much Adrian Beckingham and Philip Battley.

A hit with my 3 kids aged 5 to 9, they loved it and especially the way the story is so interactive by asking questions of the audience, WOULD YOU GO TO THE FEAST IF YOUR BULLY WAS THERE? or WOULD YOU CLIMB INSIDE THF TREE, THERE MIGHT BE SPIDERS THERE and so on. Tbh my kids often fight on long car journeys but this story got them chatting excitedly together instead! Any parents DREAM!!!

A good book for quirky kids who love some solid eeewww factor. Thank you Adrian Beckingham.

I really enjoy this story book. Also i learned many things from this book. Thank you so much Author Adrian Beckingham.