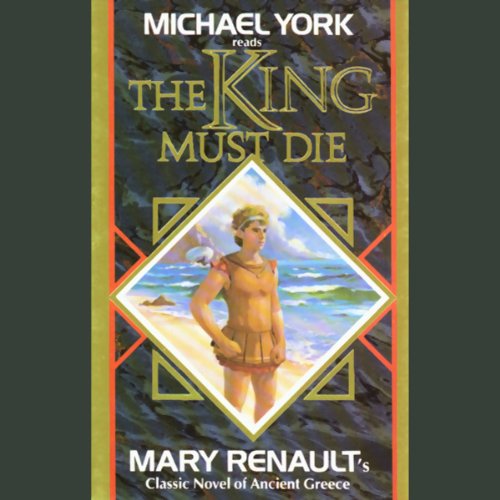 The King Must Die

By: Mary Renault
Narrated by: Michael York
Try for $0.00

This is the classic story of the young Theseus - Prince of Troizen, King of Eleusis and Athens, slayer of the Minotaur. Mary Renault's powerful novel captures the modern imagination by weaving myth, legend, history, and fiction into the story of a young hero's search for his destiny, or moira. With divine guidance, Theseus faces countless challenges in his quest for his moira. From Theseus's early life as a prince, to his leadership of a captive team of bulldancers in Crete, not to mention his thrilling encounters with Poseidon, The King Must Die captures the full force of adventure, battle, and an epic quest.
©1958 by Mary Renault, Renewed in 1986 (P)1987 by Dove Books on Tape
Historical Mystery Literary Fiction Historical Fiction Fairy Tales
Show more Show less

What listeners say about The King Must Die

Sad treatment for a classic of historical fiction

The full version of The King Must Die by Mary Renault is a glowing, convincingly detailed retelling of the Greek myth of Theseus and the Minotaur. Unfortunately, this painfully truncated abbreviation sacrifices not only most of the details and all of the grandeur, but even the narrative logic of the original. The very talented reader tries to help the listener make sense of the muddled remains, but has been left too little to work with.

What disappointed you about The King Must Die?

First why adbridge it , Mary Renault is a wonderful intellegent writer and it is great story.

He has a great speaking voice , but what a waste . I couldn't finish it . I felt like I was being droned and lectured at :(

If you could play editor, what scene or scenes would you have cut from The King Must Die?

I would love to have her books available , part of the problem with her books is they are not for the lazy reader , she uses language and words you rarely hear these days . Alot of the pronunciation is difficult as few of us know Greek . I had been hoping for a lazy way to enjoy her books and didn't get it.

What disappointed you about The King Must Die?

What could Mary Renault have done to make this a more enjoyable book for you?

She did it. The books are wonderful. The abridgement is an abasement.

WARNING! The abridgment ruins everything!

I loved this book on paper, but could not even listen to it after getting halfway through the prequel, The Bull From The Sea. All of the nuance, the personalities and the motivations of the brilliantly drawn characters has been deleted. If only someone would record an unabridged edition!

This is not abridged. It's decapitated!

Would you try another book from Mary Renault and/or Michael York?

Only if it's not abridged beyond all recognition. York does a splendid job.

Would you ever listen to anything by Mary Renault again?

If you could play editor, what scene or scenes would you have cut from The King Must Die?

I'd just read the whole book. It's meant to be long, evocative and involved.

Make it foolproof that purchasers know that they are buying an abridged work.

It's an interesting listen, but due to the way it's abridged you come away asking "is that it'?

The One thing that drove me nuts was how the narrator jumped from place to place with out any transfer.

Was The King Must Die worth the listening time?

If you can find an unabridged copy It's worth the time, but this one I'd say read the book instead.

I'd love to listen to the whole story, the wording was great the story was sound but the chop job they did on this ruined it for me.

Where does The King Must Die rank among all the audiobooks you’ve listened to so far?

This book is too good to abridge

Which character – as performed by Michael York – was your favorite?

Michael York renders each of the voices so that all the characters come alive, and the descriptive passages are as spell-binding as the dialogue

If you could rename The King Must Die, what would you call it?

The title is central; a king must be willing to be sacrificed for his people; a princess to sacrifice to save the children

PLEASE GET MICHAEL YORK TO NARRATE AN UNABRIDGED COPY OF THIS BOOK AND ITS COMPANION, THE BULL FROM THE SEA. I USED TO TEACH THIS AS PART OF THE CURRICULUM FOR THE NINTH GRADE, AND NONE OF THEM WERE EVER BORED.

I got this book since I heard good things about Mary Renault's writing, and I like books based on myths. Listening to audio books saves my eyes fatigue. I knew that this book was strongly abridged, so I wasn't surprised that the story felt gutted, so to speak, nothing but the outline of the plot. I still enjoyed the great prose and descriptions, but unless they create an unabridged version, I will still have to read the book at some point to get the full story. This is why I gave the story three stars- as a warning for people that the story is drastically shortened.

Which character – as performed by Michael York – was your favorite?

I really liked York's performance as a whole, and it's unfortunate they couldn't just have him narrate the entire book. Renault's books are popular- surely there's an audience for a full version! I for one would love that.

Depends on the movie!

A work to be read by Mary Renault

Where does The King Must Die rank among all the audiobooks you’ve listened to so far?

This book is among the top audio-books that I have had the privilege of listening to.

I was in awe of the entire book. Therefore, each character was enjoyable to me.

What does Michael York bring to the story that you wouldn’t experience if you just read the book?

Michael York's voice tone made me enjoy listening to the story.

YES! Pardon me for shouting. Mary Renault keeps me interested in her style of writing,

I wish I could find other authors with her style.

Would you listen to The King Must Die again? Why?

for the sheer pleasure of the English language.