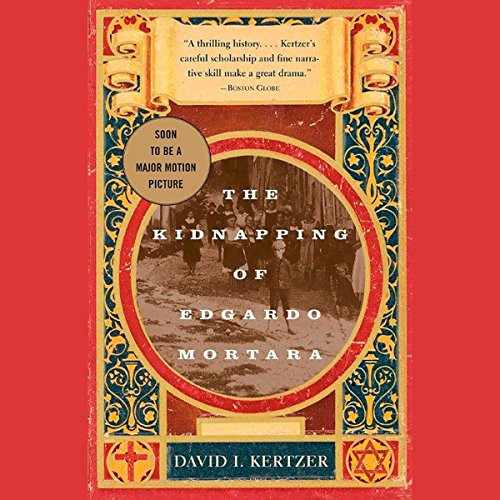 The Kidnapping of Edgardo Mortara

By: David I. Kertzer
Narrated by: Arthur Morey
Try for $0.00

Bologna, 1858: A police posse, acting on the orders of a Catholic inquisitor, invades the home of a Jewish merchant, Momolo Mortara, wrenches his crying six-year-old son from his arms, and rushes him off in a carriage bound for Rome. His mother is so distraught that she collapses and has to be taken to a neighbor's house, but her weeping can be heard across the city. With this terrifying scene - one that would haunt this family forever - David I. Kertzer begins his fascinating investigation of the dramatic kidnapping, and shows how the deep-rooted antisemitism of the Catholic Church would eventually contribute to the collapse of its temporal power in Italy.

As Edgardo's parents desperately search for a way to get their son back, they learn why he - out of all their eight children - was taken. Years earlier the family's Catholic serving girl, fearful that the infant might die of an illness, had secretly baptized him (or so she claimed). Edgardo recovered, but when the story reached the Bologna Inquisitor, the result was his order for Edgardo to be seized and sent to a special monastery where Jews were converted into good Catholics. His justification in church teachings: No Christian child could be raised by Jewish parents.

The case of Edgardo Mortara became an international cause célèbre. Although such kidnappings were not uncommon in Jewish communities across Europe, this time the political climate had changed. As news of the family's plight spread to Britain, where the Rothschilds got involved, to France, where it mobilized Napoleon III, and even to America, public opinion turned against the Vatican. The fate of this one boy came to symbolize the entire revolutionary campaign of Mazzini and Garibaldi to end the dominance of the Catholic Church and establish a modern, secular Italian state.

A riveting story that has been remarkably ignored by modern historians, The Kidnapping of Edgardo Mortara will prompt intense interest and discussion as it lays bare attitudes of the Catholic Church that would have such enormous consequences in the 20th century.

"A thrilling history.... Kertzer's careful scholarship and fine narrative skill make a great drama." ( Boston Globe)
"A lucidly drawn, dramatic narrative. Kertzer's account reads like a courtroom drama. As shapely and surprising as fiction." ( Newsday)
"Brilliant...a book that has all the merits of a historical thriller." ( Daily News )

What listeners say about The Kidnapping of Edgardo Mortara

I loath religion even more. I'm a militant atheist. What a horrible thing to have happen to child, let alone anyone.