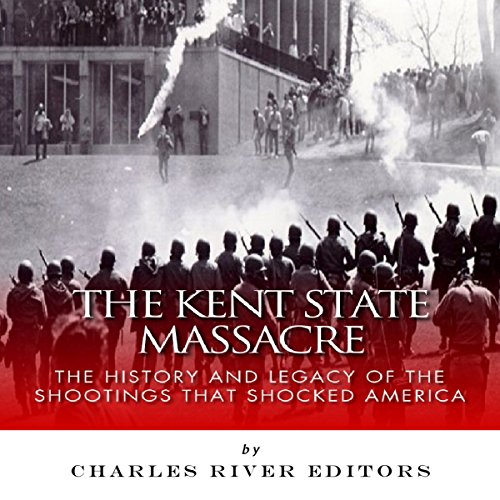 By: Charles River Editors
Narrated by: Wendy Almeida
Try for $0.00

"Suddenly, they turned around, got on their knees, as if they were ordered to, they did it all together, aimed. And personally, I was standing there saying, they're not going to shoot, they can't do that. If they are going to shoot, it's going to be blank." - One eyewitness to the shootings

The Vietnam War was one of the most controversial events in American history, and political arguments over the war brought about massive cultural changes across the country during the 1960s. The war ultimately fueled the hippie counterculture, and anti-war protests spread across the country on campuses and in the streets. While some protesters spread peace and love, others rioted. In August 1968, riots broke out in the streets of Chicago, leading to incredible scenes of National Guardsmen and police confronting 10,000 anti-war rioters during the Democratic National Convention.

By the end of the decade, Vietnam had left tens of thousands of Americans dead, spawned a counterculture with millions of protesters, and destroyed a presidency. But there was plenty more yet to come. Vietnam was already wildly unpopular by 1970, but when President Nixon announced the bombing of Cambodia on April 30, 1970, protests exploded across college campuses. Some of those protests took place at Kent State in Kent, Ohio, and the state's governor replied by declaring a state of emergency and sending the Ohio National Guard to the campus.

On May 4, a Monday, thousands of Kent State students decided to attend protests instead of class. Jeff Miller and his friends had tear gas shot at them by the Ohio National Guard, and Miller picked up one of the tear gas canisters and threw it back at the Guardsmen. At 12:24 p.m., some of the Guardsmen opened fire with live rounds. Miller was instantly killed by a shot through the mouth.

What listeners say about The Kent State Massacre