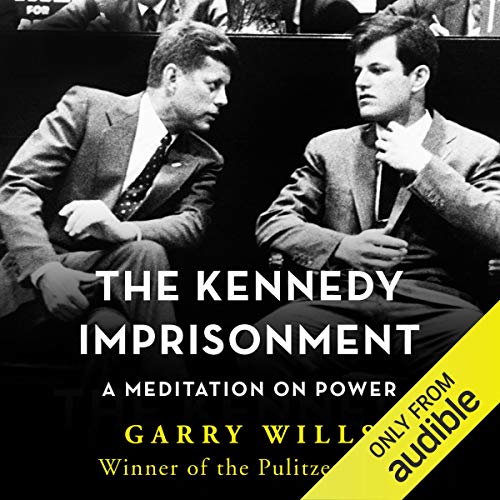 By: Garry Wills
Narrated by: Alex Hyde-White
Try for $0.00

The Kennedy Imprisonment - A Meditation on Power by Garry Wills - 1982

"This book is an exhilaration search-and-destroy mission on the higher slopes of our political culture. By turns comic and deeply serious, it is the most acute assessment so far of the Kennedy phenomenon." (Ward Just author of Honor, Riches, Fame & the Love of Women)

Garry Wills deftly exposes the influence that certain notions of "toughness", "masculinity", and "success", have had on the public careers of the Kennedy family and on the history of the last twenty-five years." (James Fallows author of National Defence)

What listeners say about The Kennedy Imprisonment

Behind the mask of American power-stars

This is a many-faceted book that may appear differently to different beholders. My quick take-away is: old Joe Kennedy was the genius, the Machiavellian showman who staged the whole thing, and prodded each piece into motion. The sons wound up being, each, varying types and degrees of free-rider and scoundrel. JFK was only the most seamless, smooth, deft at playing the part. He was also a walking facade in front of all sorts of character defects and weaknesses. He went through women like tissue paper, then played the doting husband part for the cameras. He fraudulently passed a book in 1957 off as his own, and took a Pulitzer Prize for it without blinking. He faked his history as a war hero (when he had only been incompetent and a small bit heroic after his screwup). The Kennedy sons' story arcs trail off starting with the faltering of old Joe, even as JFK stepped into the biggest stage lights of all. He vaulted them up but their character defects quickly dragged them downward. It was all fated to end quickly. What seems swashbuckling and brilliant from the cheap seats, turns out to be rancid and grotesque from any close vantage. Trump in no wise invented the casual use of humans as stage props or chess pieces, for instant discarding. But do we NEED to exalt a person like that? Tricky question.

I think USA's really ugly moments of decay started with the ascent of JFK. Old Joe was a Hollywood producer, you know. His brilliance was to be a world-class tycoon and a modern showman. That was when we the voters switched utterly from substance to style and surfaces. (Not that Nixon was such a knight in armor either.) In the Kennedy Show, the old elite sports and affectations were suddenly packaged and delivered up consciously, publicly, slickly. This is all laid out here, as on a dissection table. As it should be. But what brilliant art, what artifice, it was! It was a new level of sales job, con job. As a depressing moment in our history, it is only matched by the its beautiful shiny surfaces of fraud. Hollywood and Washington DC merged. I am fascinated and repelled. Even the nicer brothers show the sociopathic ability to lash out weirdly to preserve the family show (let's start with dead Mary Jo, and the Kennedy retainers whose careers were sacrificed to protect Teddy).

Every person, every family, every story has an arc. Paul Simon: "Every generation throws a hero up the pop charts." Unlike the Roman example, today's USA has the has-beens of power (and their families) walking around alive, sort of undead. Some are faces on the news shows. The Bushes, it seems, finally trailed off into mediocrity, punctuated with the serial bunglings likeable, catastrophic meathead George W. The Trumps, I think, will leave some impact crater in US history, will have shifted the direction and orbit of our history a bit, maybe important bits, but as a dynasty they are poised to evaporate in about five minutes (with only Ivanka having even passable discernment and intelligence among Donald's spawn). What does it say about America, to have elevated DJT, this sort of half-baked low-rent Kennedy wannabee (with seemingly all the worst Kennedy traits, in cartoon garishness), to the heights of power? The archetype, the swaggering man's man, the commanding devil-may-care type, goes back beyond the Kennedy's to their own heroes. Brits. They wanted to throw off the Irishness (as Trump does the Germanness) and emulate Lord Byron, and the cheaper modern mass media version, 1960s James Bond. All these things have been peeled back here. We don't have royalty. So, we have these arrivistes, playing to the cheap seats, as they must in a democracy. Now it has hit the reality TV level. What's left? Bill Clinton fell right into line as a wannabee of all this grease-paint and quasi-upper-class British male sexualized brio. The perks of power infest the reward system of the politics-stars, and in time, it usually all goes rancid. It is fun to watch.

This book here is a front-row seat, a perfect vantage. This author grew up Catholic, and spins stories with sustained brilliance. He is not wagging a Puritan finger, quite. But almost. Which makes this all so complexly and comprehensively American. This author is the perfect tour guide to the perfect American spectacle. And he etertains: there is the sauciness and wit of a more journalistic eye. It is an eye-opening ride. The narrator effortless shifts subtly into the accents of various speakers, in a masterful job.