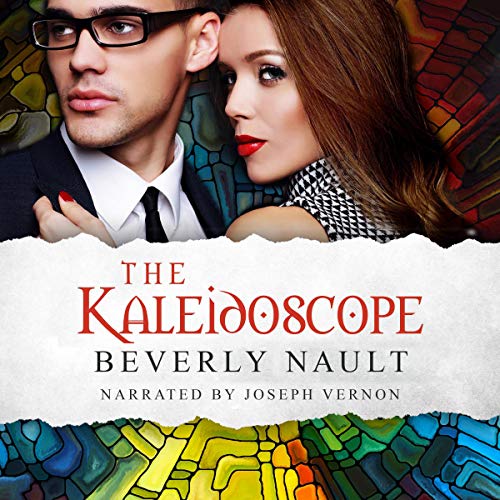 By: Beverly Nault
Narrated by: Joseph Vernon
Try for $0.00

When Harold becomes the guardian of a beautiful, handcrafted kaleidoscope with mysterious powers, his world spins from black-and-white boring into technicolor chaos. Along with Pepper, their journey becomes a life-threatening race to save the 'scope from falling into the wrong hands.

Harold's a reclusive computer forensics expert forced to become an amateur detective when a mysterious kaleidoscope shows viewers more than pretty shapes and colors. He's soon joined by Pepper, a spunky breast cancer survivor who challenges him to color outside the lines and look at life - and himself - differently, and Morrie, his only real friend who has his own secrets. Together they must solve the riddle of what makes the 'scope work before the bad guys get their clutches on the valuable future-telling device.

Brilliant but socially inept, Harold has distanced himself from any connection to his dysfunctional childhood. Abandoned by a father accused of his mother's death, Harold trusts no one until the 'scope forces him to accept a circle of people he must learn to rely on. Just as he is on the verge of learning how it works and why his past connects to his future, he must face disturbing truths he's run from all his life. Join Harold and his new group of friends, including Rhashan the mail room guy always ready with Caribean-spun folklore, to Pepper who's embracing life for all it's worth. Keith and his partner Frank are also crucial to the solving but have some unfinished business of their own. When Harold's past meets his future, everyone in the gang works side by side to discover who's behind the incredibly exciting, but scary, advances in technology only dreamed of until now.

What listeners say about The Kaleidoscope

Do you know what kaleidoscope is? For those of you who do not know, it is a toy consisting of a tube containing mirrors and pieces of colored glass or paper, whose reflections produce changing patterns that are visible through an eye hole when the tube is rotated. If you had an object that could show you your future instead of these mirrored pieces of colored glass, would you use it? Or if you had a chance to view your innermost desires or fears, would you jump at the chance to view them? This concept is very trivial, yet inspirational in the technological advancement arena. Nault brings an interesting story to readers about a man who is given a Kaleidoscope, not knowing anything about it, and forced to come to terms with being comfortable with uncertainty.

When Harold gets a chance at a promotion of a lifetime, he knows this will show his ex how serious he is about his life. Being known as a passerby of his own life has taken him down some pretty shoddy paths, but no more. This promotion means everything. Determined to make his trust issues take a back seat, he becomes entrusted with a wacky kaleidoscope that was given to him by just as wacky of a man. Homeless in the park, this man gives him this object, before he is dragged away. Little does he know, this object has unknown powers. Everyone who looks in sees something different about their life. Some brush it off as a cool kinda toy, but some are perturbed by it and awed, even downright greedy to get their hands on it. Harold, being a tech geek himself, knows that there is a story behind this object if only he can find that homeless man and figure out why it had to be him to receive it. Being abandoned at an early age by his father after his mother’s death, he has always believed that his father was the murderer. Meeting a quirky, yet cute neighbor next door has lightened him up to the possibility that he shouldn’t keep living in the past. As his relationship grows with Pepper, so too does an age old mystery that may connect him back to his father and give him the answers he so desperately longs for about his mother’s death. Finally, he may be able to leave the past…in the past.

Nault has a compelling story filled with creativity and well-defined characters. The story is fast-paced and the characters are fun and unique; Harold being a tech savvy gent who lives in the past and Pepper being a spunky cancer survivor living as much as possible in the now. The author will most likely not have a problem luring readers in with the cover artwork because it is colorful and eye-catching. Since this is a review of the audio book, the story appears to be well-written solely by the narration alone. Vernon is fun and breathes life into Nault’s characters. His vocals are on par with situational cues and the emotional bouts that the characters face. There are a few hiccups in the narration, like a line or two would be repeated or a longer than average pause, but not enough to hinder enjoyment of the audio book. If you are a reader of fantasy and mysteries, you may be interested in traveling alongside Harold and Pepper in their quest to find answers about the mysterious Kaleidoscope.

An audio book was provided to Turning Another Page by Audiobookworm Promotions and in no way affects the honesty of this review. We provide a four-star rating to The Kaleidoscope by Beverly Nault.

surprised by what was inside....

I found a very pleasant surprise within the listen of this Romantic Thriller.

I loved Pepper because most of all she did not let life's hand dealt to her get her down or out of the race. I loved her spunk. Together with Harold I loved their journey of bumps, twist, and a chance.

It took me a few moments to sink in to narrator Joseph's voice but once I got going I was good.

I couldn’t get this book.

I received this audiobook at no cost from Audiobookworm Promotions. The gift of this book did not affect my opinion of it. I tried and tried, but I couldn’t understand why Harold was so blind and he really made me angry. I kept trying, sorry.