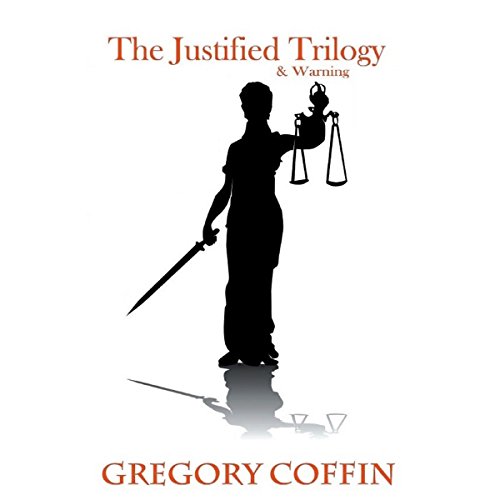 By: Gregory Coffin
Narrated by: Scott Berrier
Try for $0.00

The Justified Trilogy is composed of Necessary Means, Opposing Force, and Preemptive Strike. In Necessary Means, Daemon Justice arrives in time to see his wife Dominique and daughter Danielle get kidnapped. He uses force against force to try and save his family. In Opposing Force, Dominique and Danielle are at a rest stop that gets robbed. The robbers tell everyone to get in an enclosed area, but Dominique refuses to let herself and her daughter be trapped. Preemptive Strike has the Justice family getting attacked in their home, but for political expediency by those in charge, there will be no action made against those who led the assault as they are outside the country. Daemon gets some help to make sure his family doesn't get attacked again. Lastly, Warning is a stand-alone story that follows Aaron Adamson as he meets up with a woman who is certain the work he does will lead to great harm and she will do whatever she needs to in order to stop the harm she sees his work will bring. The Justified Trilogy and Warning is a short-story compilation that reviews how good people may respond when thrust into dangerous situations and imminent threats of harm. Not only is the threat to be addressed, but if there is a reasoned basis for the harm to be inflicted, that reasoning needs to be addressed, otherwise the reasoning will remain for the next one who believes it to attempt the harm again. There are times in life when we must act, and at those times we do so with what we have available. Failing to act at those times will leave us at the mercy of those who are trying to hurt us.

What listeners say about The Justified Trilogy & Warning