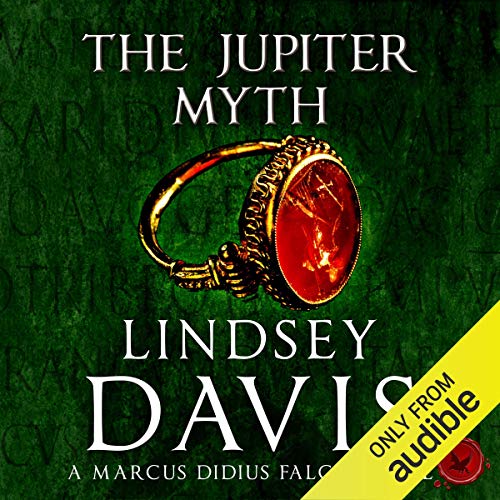 By: Lindsey Davis
Narrated by: Christian Rodska
Try for $0.00

Marcus was hoping for a relaxed visit to Britannia. But things turn serious at the scene of a murder. King Togidubnus has been stuffed down a bar-room well - leading to a diplomatic situation which Marcus must resolve.
©2004 Lindsey Davis (P)2014 Audible, Inc.

What listeners say about The Jupiter Myth

This is definitely my favorite in the series so far. It is absolutely packed with action, and less cliche. This series is often hit and miss but this title contains the characters at their most likable placed in incredibly interesting situations. Christian Rodska, the narrator, continues to be excellent and add great charm and color to these mysteries.

I have read and re-read the books, and now am having fun listening to them on audio. Great narration! These novels have a little bit of something for everyone- they're good mysteries, they're an interesting look at the Roman Empire, and the main character is funny. Smart, but also light and entertaining. So far there has only been one book in the series I haven't absolutely loved.

Great episode in this romp of a series

I love this series. I love the different locales (this time it continues from the previous episode in Britannia). The characters are great, as always. No need to write a lot - you can see my reviews on the earlier episodes. All are great reviews (maybe a star more or less here or there). Rodska is not my favorite narrator in this series, but he did a fine job.

I've enjoyed this series before, but this is not the jewel in the crown. The plot is sloppy and there is a lot of explication to make up for it. There are some really enjoyable books in the series.

loved the narrator. one of the best Falco books I've listened to so far!

The usual competent novel that continues earlier characters and the "career path" of Falco. Gently teaches about Roman Britain without being too obvious. Can be read as a stand alone but better if you've read earlier novels. Another enjoyable read.

Only for those who have read all the previous.

I liked the first book in the series. It was a PI-noir set in ancient Rome. But the next few books are not in audio and instead are abridged radio dramas. I tried one, but it was difficult to listen to, so I went on to try this book because its back to the audio form. Big mistake!

The book tries to cover the events of the earlier books, but doesn't do a good job of it. I know all the characters, but they are still impossible to keep straight. Like the first book, this is primarily a mystery with some Roman infodumps here and there. While this worked when the main character was a penniless PI, it doesn't work now that his fortunes have risen and he's supposed to be respectable. The noir elements, which were the best part of book one, have been removed and replaced with nothing. The Roman gloss is particularly glaring in this book that takes place in Briton but without any of the knowledge or sympathy found in the Ruth Downie books.

Skip this series. The Roman Medicus series and medieval Mistress of the Art of Death series are much better.

One of the better Didius Falco Series

Didius is at it again with the usual nasty people, political problems and women problems in a foreign land. Once again they are on the fringes of the Roman Empire in Britain. Good story that moves along and is well read. However, if you don't like historical fiction, this type of mystery may not be liked.

This book runs seamlessly on from "Body in the Bathhouse" and is more a story continued rather than just the next episode of Falco's memoirs. Now in the barren outpost of Londinium, Falco and Petronius are pitted against some nasty (and one not so nasty!) faces from the past. In this we first meet Albia (one of favourites) and we discover just what misery Falco and HJ rescue her from. Again, Rodska's superlative rendition adds more to Davis's narrative than my imagination ever did.

a favourite of a series of favourites

I relistened to this story and was still unable to pause or stop without finishing, the plot ran quickly with many turns all interweaved with intreaging views of Roman Britain.

failing the first Falco, Anton Lesser, Christian Rodska. Lindsey Davis exelled herself.
The most memorable moment is hard to choose, but the last chapter was really moving.
HIGHLY RECOMMENDED - and l'm REALLY hard to please

Thought it was good . The reader was engaging and his voice range was distinctive and varied making it easy to distinguish the characters. I'm sure there are better books in the series but this was perfectly enjoyable.

Excellent Falco - but first 5* for this narrator

Story excellent, well up to standard, and great to meet Flavia Albia at last. My main reason for writing this review is to say - fair's fair - this is the first time i've really enjoyed this narrator's work. He has shed all the cretinous accents and manners he gave to the other characters and I couldn't fault it.

Loose yourself in Londinium

Great story that follows Falco from conclusion of The Body in the Bath House.

The narration by Christian Rodska is outstanding and he manages to bring all the characters alive with his amazing talent for different voices.