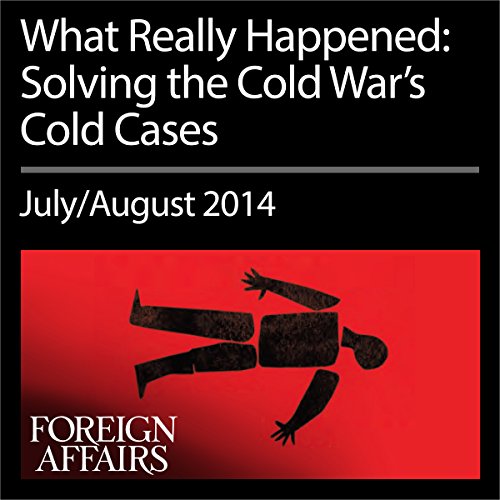 The July/August 2014 Issue of Foreign Affairs

By: Foreign Affairs
Narrated by: Kevin Stillwell
Try for $0.00

"What Really Happened in Iran", by Ray Takeyh: Conventional wisdom about the 1953 coup in Iran rests on the myth that the CIA toppled the country's democratically elected prime minister. In reality, the coup was primarily a domestic Iranian affair, and the CIA's impact was ultimately insignificant.

"What Really Happened in Congo", by Stephen R. Weissman: Newly available evidence shows that the CIA engaged in pervasive political meddling and paramilitary action in Congo during the 1960s - and that the local CIA station chief directly influenced the events that led to the death of Patrice Lumumba, the country's first democratically elected prime minister.

"What Really Happened in Chile", by Jack Devine: The 1973 coup in Chile is often included in indictments of U.S. covert action during the Cold War, during which the United States, at the direction of a number of presidents, sometimes took actions of questionable wisdom to prevent or reverse the rise of leftists who Washington feared might lead their countries into the Soviet orbit. In truth, the CIA did not plot with the Chilean military to overthrow Allende.

"What Really Happened in Bangladesh", by Harold H. Saunders: In 1971, the Pakistani government orchestrated a brutal military crackdown against the Bengali population in East Pakistan - while the United States stuck by its ally Pakistan. Gary Bass' new book spotlights the "significant complicity" of U.S. President Richard Nixon and his national security adviser, Henry Kissinger, in this "forgotten genocide".

Essays: "New World Order": Erik Brynjolfsson, Andrew McAfee, and Michael Spence. Machines are substituting for more types of human labor than ever before. This means that the real winners of the future will be neither the providers of cheap labor nor the owners of ordinary capital, but rather those who can innovate and create new products, services, and business models...and much more.