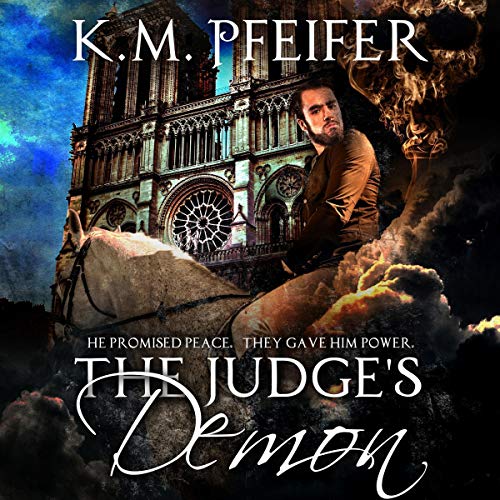 By: Khris Pfeifer
Narrated by: Gerard Marquez
Try for $0.00

The Hunchback of Notre Dame meets The Handmaid’s Tale and YOU in this twisted rendition of history.

Claude is stricken by tragedy, and all fingers point at the Gypsies as the nation divides, and an empire falls. He is the king's best man and has been given orders to rid France of all their problems.

Amidst his role in a barbaric hunt and corrupt justice system, Claude finds himself drawn to a young girl of this minority race and consumes himself with her and his own ideas of who she should be for him.

They gave him power.

Paranoia and twisted delusion begin to bind Claude's double life as a charming official, able to justify his every crime to his followers, but also a criminal narcissist with a blood obsession.

Now their new world must be paid for.

Will his desires for the girl soften his heart? Or will the Judge's Demon of hatred add fuel to the fire in his search for the leader of the rebellion rising against him?

"Skillful...allowing readers to confront the dark, mad elements in society - providing a glimpse into the mind of psychopathic individuals who live on the fringe." (Prairies Book Magazine)

"Author Khris Pfeifer does very well in The Judge’s Demon, very aptly named, to keep readers hooked and tense in their seats until the very end where they are left wanting more. The author also does excellently in developing the sense of paranoia as well as showing the characters developing madness, and the relationships that are cultivated." (Readers' Favorite)

What listeners say about The Judge's Demon

The Judge’s Demon by Khris Pfeifer is the first book in The Demons Inside series that I listened to on audio narrated by Gerard Marquez.

All I can say is wow! Khris did an amazing job on this storyline. The book does end on a cliffhanger and I can’t wait until she releases the second book in the series. The story does contain graphic violence including torture, abuse, and rape. However, I think Khris did a great job including it the storyline but not being too descriptive to make you cringe.

Gerard did an amazing job on the narration. I felt that his voice was perfect for this book.

Disclaimer: I received this book from the author in exchange for an honest review. It's hard for me to talk about this book without delving into spoilers so I will keep it brief. The book is great and well worth a listen. If the author needs reviewers for the upcoming sequel, I would be more than happy to give it a go.

I was surprised to find out that this was the author's first book. The characters all feel well realized and the plot was very interesting. The scope of the book is pretty ambitious too. I look forward to seeing how the story will develop in the sequel. I have a slight nitpick and it's that the setting feels like it should be more fleshed out. I found myself feeling in the details from movies I have seen in the past that use the same setting rather than from what the author has written. It's not enough for me to lower my rating though.

The narration was great with a wide range of emotion in the narrator's voice. However, some voices fluctuated throughout the story and others sounded too similar. I think with more practice, he can overcome these issues.

A story of survival...

There are stories of good vs. evil, heroes and villains, and triumph over tragedy. The Judge's Demon is not one of these stories...and that is what makes it great. It is a story of survival in its purest form. In dark times, in a world of oppressed people, there are not always heroes, and there are not always white horses to free you from the terror of daily life. The author paints this picture well, and makes you feel for the characters, hoping they will make it...or in some cases, hoping they won't, just to end the suffering.

The Judge's Demon is a brutal, graphic depiction of life in a darker time. The treatment of some characters will likely offend some, terrorize most, and anger the rest. In short, you will feel something while reading about the repeated torture, rape, and debasement of innocent people. You will become enraged at the dehumanization of an entire culture, and scorn the weak men in positions of power that allow it to happen...and that is exactly the author's intent. Drawing raw emotion from a reader is one of the hardest things for an author to do, and this story will hit its mark, regardless of where you are on that spectrum.

Khris Pfeifer places a warning in the description of this book, and I encourage caution for anyone who's suffered from domestic violence or sexual abuse in the past.

From a critical standpoint, the book was written in third person omniscient. As such, several chapters were told from different viewpoints, bouncing from one character to another, revealing their inner thoughts. It was distracting at times, and I found myself losing my place and wondering what 'he said to him' referred to. It wasn't enough to detract from the story, but could make you stop and start several times throughout.

In addition, I received an audiobook copy, so I will comment on the narrator. Gerard does a wonderful job and is very clear in his delivery. That being said, his range in character voices is a little inconsistent, as some of their voices change throughout the book. The weaker men have the same, feminine voices as the female characters, and all the more dominant men tend to sound the same. Again, nothing that detracts from the story...just an observation.

I look forward to the second installment to see if Pfeifer can turn the 'survivors' of book one into the heroes of their own story.

Disturbing insight into the historically oppressed

This is quite a disturbing book and I'm glad it comes with trigger warnings. The book is written to not necessarily be graphic in it's detail but it's powerful in conjuring this world in your imagination. The narrator's voice brought all the dark emotions to the fore and I actually hated the main character whenever I heard him. Despite my negative feelings towards all the atrocities, I couldn't put this book down.

The actual story is set in history that I was actually unaware of. Apart from showing what the oppressed went through at the time, I think it's a must read book for anyone to understand the power play for abuse and domestic violence.

The ending is set up for a second book which I will definitely want to read but I almost wished for a less happy ending - just to end the misery of the gypsies.

I was given this free review copy of the audiobook at my request and have voluntarily left this review.

I really enjoyed this Fantasy, I am looking forward to the next book in the series. This really is a Hunchback of Notre Dame meets Handmaid’s Tale story that is fun enjoyable and you will not want to put it down.

The narration was a perfect fit for this book and brought me into this world.

This book was provided for free, however, this is my honest opinion and review.

I really don't know how to write a review about this book. The writing was good and so was the narration but the story itself was disturbing. It reminded me of a warped version of Disney's The Hunchback of Notre Dame without a hunchback. I knew that it was a bit dark but even I didn't expect this. First, this takes place in the mid to late 1790's Paris which shocked me as it was just after the terror. Also, I didn't know there was a conflict with gypsies during this time.

I honestly didn't think I would make it as it was brutal right from the beginning. I kept listening, hoping it would get better. It was the equivalent to not being able to turn away from a bad accident despite being horrified by it. I was disgusted by the behavior and actions of The Judge and his men, especially Charles. This story was filled with violence, oppression, rape, brutality and torture.

I felt so bad for the gypsies-- especially 14 year old Marie and Julian, his ward. I kept hoping The Judge would get better but he continued to spiral down into a a vortex of paranoid, narcissistic behavior. Honestly, I don't know why I expected him to get better. This is a man who raped a 14 year old and turned her into a sex slave. It was horrible to experience. The Judge and his men mercilessly hunted, abused and killed gypsies because of a sense of superiority and religion.

I can't help but wonder what was the authors purpose of this story? Was it to show that power can corrupt and turn normal people into monsters. Was it to show how doing something in the name of religion isn't always right. The hypocrisy of The Judge and the men was staggering. That's what I took from this story.

This is fiction but it's also a lesson of history. This story really made me think about what oppressed people throughout history must have gone through, especially women. I could not stop listening to this but it was hard at times. I'd sworn I wouldn't listen to any future books in this series but I think I'll give book 2 a try once released.

I really enjoyed it! This book caught my attention from the very beginning and held throughout the entire story. It is pretty emotional since it deals with very sensitive subjects. The narration was great. It will keep you entertained. The author does a great job with the character builds and plot. This was my first book by this author but definitely not my last. I look forward to reading more books in this series. I was given this free review copy audiobook at my request and have voluntarily left this review.

I loved this book and couldn't stop until I found out how it ended. The narrator did a great job with keeping you intrested.