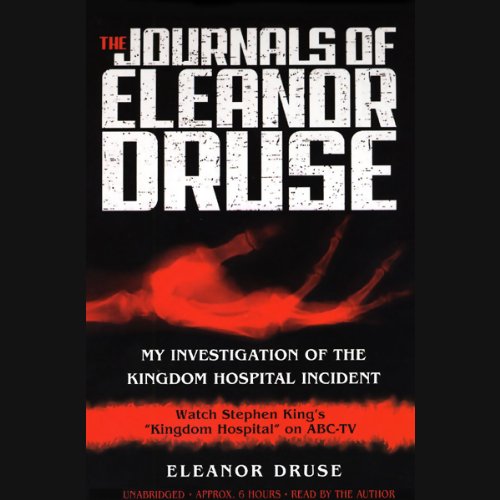 The Journals of Eleanor Druse

My Investigation of the Kingdom Hospital Incident
By: Eleanor Druse
Narrated by: Eleanor Druse
Length: 6 hrs and 2 mins
Categories: Fiction, Horror
4 out of 5 stars 4.0 (78 ratings)

The Journals of Eleanor Druse

Eleanor Druse has always been interested in the paranormal, but her fascination intensifies after she has a near-death experience at Kingdom Hospital while visiting a childhood friend who has just attempted suicide. Eleanor is treated for a mysterious condition at Boston General Hospital in Massachusetts, where she falls under the care of her nemesis, a surgeon named Stegman, who doesn't believe in Eleanor's psychic gifts.

Eleanor escapes the clutches of Stegman and returns home to Lewiston, Maine, where she hears of more strange occurrences at nearby Kingdom Hospital. She feels compelled to investigate and enlists her reluctant son Bobby, an orderly there, to aid her. Eleanor discovers that the hospital rests on the site of a textile mill that burned to the ground after the Civil War, killing many workers, including child laborers. She becomes convinced that the spirit of one girl, Mary Jensen, is trapped in the hospital, and that the apparition seeks resolution for her grisly death. She also senses other evil presences in the ancient hallways, including the spirit of a physician whose past may be intimately bound up with the child's spirit and with Eleanor's childhood as well.

These carefully kept journals trace Eleanor's investigations into Kingdom Hospital, from the beginning of her covert work up until its stunning and terrifying conclusion. The journals are a fascinating work, providing insights into the very nature of the spirits that haunt the hereafter.

This is the fascinating and thrilling exploration into the supernatural that inspired the television event Stephen King's Kingdom Hospital.

Where's the rest of the story?

This book is contains interesting characters and promises to deliver thought-provoking concepts and an interesting interweaving of earthly and otherworldly conflicts among the characters. It also promises a suspensful plot and supporting subplots that have the possibility for a brilliant conclusion. Unfortunately, the author does not fulfill these promises. The author fails miserably to resolve any conflict among herself as the narrator and her most interesting "otherworldly" characters and, as a result, fails to bring the story to any satisfying conclusion for the reader. I was extremely disappointed with the author's lame attempt to end the story. The author teases the reader along with suspensful writing but than slaps the reader in the face with a lame ending that provides neither conflict resolution nor any satisfying conclusion for the reader. It's almost as if the author just gave up or was too lazy to put forth the effort to conclude the story in a professional manner. The book fails to provide any payoff for the time the reader has invested. The book appears to be nothing more than a precursor for a future book or a transparent teaser to garner television ratings for "Kingdom Hospital," Stephen King's offspring television series that is loosely based upon this book. Perhaps any conflict resolution may be found in the television series or the author expects people to watch the television series in order to discover the story's true resolution. I paid for a book containing a full story and it appears two-thirds of the story is missing. All in all, I'm sorry I wasted my money.

A WONDERFUL Companion to "Kingdom Hospital"

This was a -fantastic- discovery for a fan of the miniseries, "Kingdom Hospital." The narrator was SUPERB, her pronunciation, intonation, timing and acting -dead on,- and the story was just wonderful. I loved every little atmospheric, enchantingly creepy bit, and it's in no small part to the narrator's performance. Story-wise, I freaking adored how Mrs. Druse had people wrapped around her marvelously intelligent, insightful finger, and enjoyed the detail, flow and descriptiveness of the narrative. It was paced well, detailed well but didn't drag, moved along nicely, and was just a -beautifully- told story. I think my -only- complaint about this piece is that there wasn't enough! I wanted to hear more more more, and just wish that they'd gone all the way through the KH story. :)

Now I need to find the rest of Kingdom Hospital tale, written by this same author and narrated by this same voice actress! ^_^ HUGE kudos for this!!

If anyone wants to watch the tv show you first need to hear this book. It will explan a lot of things. I understood everything after this book and you will too. Audible is the only place I could find it in audio fomat amd reasonable on price.

A meandering story that consistently bashes science, and never really convinces the reader about ghosts that "Sally" hears.

I had a hard time dragging myself through it.

Brilliant theme for a pilot.

I was also amiss with the unfinished ending of the book. Then after careful reflection realized.. This is a brilliant way to delve much deeper into character development than would even be normal in an extended two-hour pilot. Truly riveting story, although I have not yet watched the T.V. series, the depth of the characters, due to this book might just will me to turn the knob on Thursday!

I am very upset. The ending left me hanging. They show more on tv then they said in the book. The tv keeps the story alive and pick up where the book left off. Unless there is going to be a part 2 watch the movie on tv. I an shock on how she has ended the book. That is not an ending. She should of put more into the book.

Just a vehicle for the doomed TV series

It was meant to be backstory for the "Kingdom Hospital" TV series. Doesn't hold up on its own and we'll never see the end of the story.

I watched the Kingdom Hospital mini series and was interested in this story. It is well written and the author reads it and does a lovely job. I was a little disapointed in the book only because it deviated so far from the mini series. But it was a good book just the same. I love spookie stories and this one did give me the willies a few times! I would recomend it to anyone who has any interest in the paranormal or meta physical areas. (Please forgive my typo's, I am mulit tasking). Thanks for reading my review.