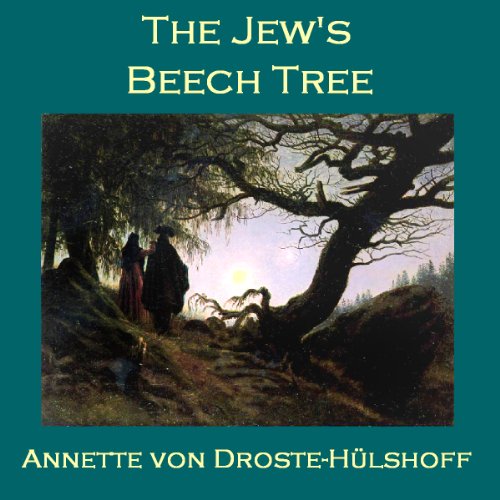 By: Annette von Droste-Hülshoff
Narrated by: Cathy Dobson
Try for $0.00

Annette von Droste-Hülshoff's dark tale of an unsolved murder, revenge and the supernatural. When the young Friedrich Mergel goes to work for his uncle, he is quickly drawn into a world of shady business dealings and a ruthless band of wood-thieves. But on the night when Friedrich quarrels with Aaron the Jew, he subsequently disappears, together with his illegitimate cousin John Nobody. Shortly afterwards, Aaron is found murdered. Friedrich's disappearance is considered suspicious - but as time passes, the case and the characters are forgotten.

The only thing that remains is a strange Hebrew inscription on the beech-tree where the murder took place. But twenty-eight years later, John Nobody reappears and strange things start to happen.

What listeners say about The Jew's Beech Tree

This book was written in about 1842 (possibly based on a true story that took place half a century earlier) depicting the basest instincts and behaviors of which people are capable. Annette von Droste-Hülshoff has chosen a plot that focuses on a small group of people living in a deeply wooded and secluded part of Germany, who seem cut off from outsiders by distance. They are thus tightly woven into a community that is close, and reliant on each other for safety.

The main character is Friedrich Mergel. He is the son of an alcoholic, wife-abusing man. who marries a second wife that complements his ungodly ways by her strict religious, virtuous manner. We are invited to view Friedrich as somehow the offspring of good and evil, hinting at the undertones of the plot to come in the story. Early on, the father dies on his way home during a ferocious snow storm, and people quickly designate the part of the woods where he died as frightening, harboring his ghost. There is also an anonymous group of poachers who rob the forest of wood and remain unidentified, which keeps the villagers wary and suspicious. Margreth, the mother, has a brother who appears to be steering young Friedrich toward bad deeds, but we also see what looks like great denial on the part of the mother--if not tacit support for what happens.

This is the background, well designed to set the atmosphere for murders to occur, and they do. The writer has done an excellent job of characterizing aspects of the main characters so as to leave the listener wondering who may have committed the the crimes, and also feeling the eeriness of the woods, the poverty lifestyle of the people, the jealousy and despair that may have supported such events. There is a curious character, John Nobody, whose name invites us to speculate on who he is, what his role in the story will be. One of the murdered men, Aaron the jew, dies beneath a tree that later has a mysterious message carved into it--which will be the central clue to the whole story.

This is a well-written, excellently narrated example of the then novice idea of mystery writing. Although not long, it is deeply engaging, the characters are well-described and the atmosphere itself carries the sense of a foreboding space from which nothing good can come. I did not know the work of this author, but found it to be very compelling. And the narration was, quite simply, excellent.