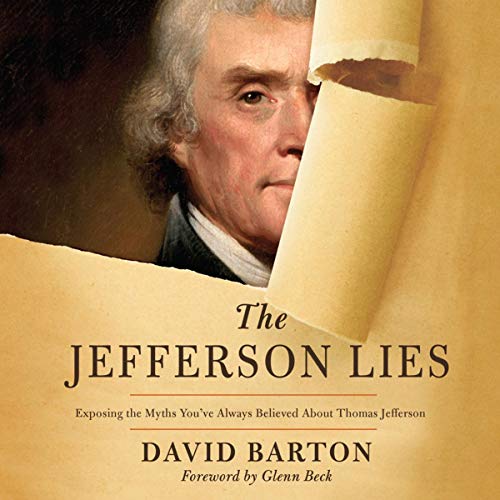 By: David Barton
Narrated by: Bill DeWees
Try for $0.00

America, in so many ways, has forgotten: Its roots, its purpose, its identity - all have become shrouded behind a veil of political correctness bent on twisting the nation’s founding, and its founders, to fit within a misshapen modern mold. The time has come to remember again.

In The Jefferson Lies, prominent historian David Barton sets out to correct the distorted image of once-beloved founding father Thomas Jefferson. To do so, Barton tackles seven myths head-on, including:

Through Jefferson’s own words and the eyewitness testimony of contemporaries, Barton repaints a portrait of the man from Monticello as a visionary, an innovator, a man who revered Jesus, a classical Renaissance man - and a man whose pioneering stand for liberty and God-given inalienable rights fostered a better world for this nation and its posterity. For America, the time to remember these truths again is now.

What listeners say about The Jefferson Lies

A wonderful juxtaposition of truth against a sea of historical revisionist folly. One of Barton's best works.

As a student and teacher of the Constitution and Founding Fathers this book does not disappoint! It is chock-full of primary sources backing up every claim. I am one that prefers to not meddle with theories nor philosophies of men but rather go straight to the horses’ mouth for my information. Who has time to waste on false information? Not me.

This book is separated into chapters with each dealing directly with one of seven main lies we’ve all been taught as truth over the past 120+/- years. Describing first what the lies are by using direct quotations, the author then delves into the contextual history of the actual issue. He provides background information and primary documentation, usually in direct quotes by Jefferson or someone who was close to him or the issue at hand in that day. I couldn’t take notes fast enough!

The proof offered is incontrovertible. It is also fascinating as the reader/listener is offered a small, but powerful historical lesson in story form regarding that event, enlightening the mind not only as to what actually happened but as well to the moral of the story which is as applicable to our own day as it was back then.

The reader walks away from this book with a greatly renewed hope and respect for America and her own Thomas Jefferson, and inspired by this great hero and his character and integrity, which only inspired this reader’s heart to want to emulate Jefferson as best I can.

Highly recommend this book! It sets the record straight - and on more levels than one - and it offers insights into how it is that history is distorted and re-written by those who are trying hard to dismantle national pride and national identity in order to remove all borders in the mind (by creating in us a disgust for our Founders and past,) as well as ultimately all borders in the world to create a one-world government. They know they’d never achieve that if Americans knew their honorable past and true identity!

I rarely give 5 star ratings but I’d give this one 7 stars if I could.

Must read for US history buffs

Great book. Helped me gain deeper insight into the life beliefs that Thomas Jefferson held and contributions that he made to the expansion of awareness and consciousness of this country and the world.

Great subject matter. Restored my love of history and the great American founders.

My only complaint is that there are maybe 4-6 times throughout the performance where the audio skips. If audible could fix that, that would be appreciated.

informative and instructive. Organized case against those who desire to tear down the character of Thomas Jefferson.

I really enjoyed this book and the sources he cited to back his information. It was really informative and I liked the way he proved the lies.

Well footnoted and documented data debunking the lies that modernist have spread regarding Thomas Jefferson.This book is extremely thorough. I look forward to reading more of David Barton's books in the future.

Wonderful, copiously sourced refutation of the modern descriptions of one of our greatest founding fathers. Not only does the author expose the lies being perpetrated about Jefferson, he exposes the reasons and machinations behind the lies and gives you the tools to recognize and counter the lies in other works.

Would you consider the audio edition of The Jefferson Lies to be better than the print version?

I own both. It's nice to be able to listen while working but for better digestion I have a hard copy as well.

Well written, well documented. It is so nice to see the Jefferson lies that have permeated our culture debunked.